I wonder if the participants of the “Peace Camp” at Parliament Square in London have ever noticed the irony of protesting against all kinds of wars under the amused eyes of Winston Churchill. 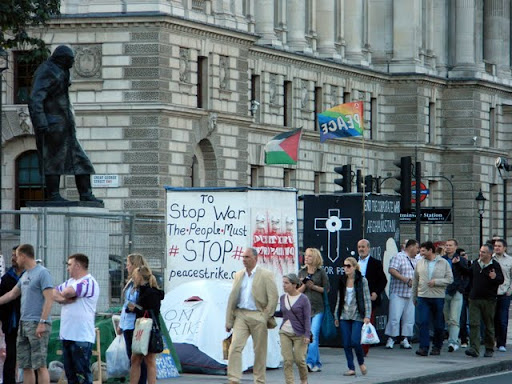 The “Peace Camp” is a continuous protest for, against and about an unclear litany of foreign policy issues. The camp has been in place outside the Houses of Parliament for more than 10 years now, not having achieved any of its aims, but successful in showing how relaxed the British democracy deals with protests at the doorsteps of its Parliament.

Travelling the world and writing about it. I have degrees in law and philosophy, but I'd much rather be a writer, a spy or a hobo.
View all posts by Andreas Moser →
This entry was posted in History, London, Military, Photography, Politics, UK and tagged Boris Johnson, Churchill, democracy, demonstration, foreign policy, House of Commons, Houses of Parliament, irony, pacifism, parliament, Parliament Square, peace, Peace Camp, protest, protests, Sir Winston Churchill, war, Westminster, Winston Churchill. Bookmark the permalink.

9 Responses to Peace Camp at Parliament Square in London