A Lonely Walk in the Snow

Humans who are cold can’t really be beautiful. Nature can. 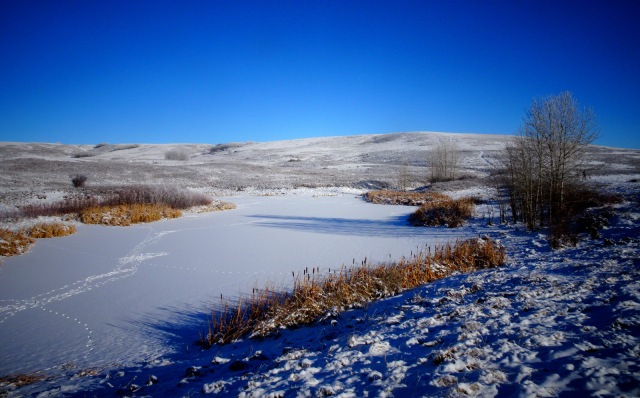 It looks like the perfect day for a long walk, with the sun shining from above and being reflected by the snow on the ground. So much light, and so few people to share it with. Because it is what they confusingly call a weekday, which seems to prevent them from walking, enjoying, almost from living.

I am usually quite happy to be alone, but today, I wouldn’t mind sharing the walk with a special person. The day would be even brighter, the walk brisker, the conversation more interesting, the heart beating faster, the smile wider, if she was here.

But she is in prison.

It doesn’t bother her anymore, because almost everybody she knows is there, too. Most of them wouldn’t even think of it as prison because they are allowed to go home at night. But if they ever didn’t show up the next morning at the large cage of steel, concrete and glass, each of them assigned to a different cell on a different floor in a different building, depending on their sentence, they would be in trouble soon. Same if they ever wanted to go home early. Or if they wanted to speak their mind. Trouble rarely arises, though, because these prisoners are rather docile.

I have reached the top of the hill, maybe led by a romantic wish to see her from afar, and the complex comes into full view.

These places have evolved, it seems at first sight, yet looking more closely, it’s the same old idea as on the plantation. People in power use those without power for their own gain. Pressure and control are exercised from the top down. Whoever can’t stand the pressure will pass it on. Downward, of course, for that is the only direction. The other direction, upwards, is reserved for time and labor, transformed into profits, ever growing, but never enough.

People wear uniforms, just like in a labor camp. Different uniforms for different groups of laborers, because what is divided is so much easier to control. People don’t see that they are in the same boat if half of them wear a green uniform and the other half an orange one. Even less so if you pay some of them more and promise everyone else that they, too, can earn more if they just work harder and shut up. And in case the paltry income wasn’t enough to keep them toiling, you can promise the serfs an even paltrier pin for every five years of obedient service. And maybe a watch after 15 years. It’s so insipid, it’s insulting.

By the way, employment is not primarily the sale of work, it’s the sale of time, the sale of an irretrievable part of your life, day after day, until most of it has disappeared or you are too exhausted to enjoy it. In the process, companies get richer by exploiting labor, banks and real estate companies (and probably a few lawyers, too) get richer because you need to live in a place where you would never need to live if it wasn’t for work (similar to the owner not allowing you to move off the estate). Car companies get richer because you think you need a car to get to the place of work (like the companies in Steinbeck novels than “lend” you the tools you need for your daily job, for a fee, of course).

Punishment for non-compliance is no longer the withholding of food, but the withholding of money, rendering the perpetrator poor, homeless and destitute. But again, this rarely happens, for fear itself is enough. Ostracism also works wonders. You don’t even need to ship people to an island anymore. If you dare to quit, you will lose “friends” and prestige. And thus, people who are only at home for breakfast and one hour of TV after work invest tens of thousands of dollars into the house, which they don’t own because it really belongs to the bank. Instead of going for a walk or a run every day, people sell their time to a factory or an insurance company, then pay a gym for the privilege of being allowed to run. The saddest thing to observe is how sincerely people believe they need stuff, which until a year ago they didn’t even know existed.

Sometimes, it seems everyone has gone mad, selling their whole adult lives for mere stuff, most of it produced in China. Nobody has time to deeply reflect on this, because everybody is running back and forth, making sales calls, attending meetings, writing reports, advising, consulting and bullshitting.

But a prison with a lot of inmates is still a prison. Or maybe a madhouse.

My friend knows herself how bad the situation is. She has complained about it often enough, when she had to interrupt a dinner or a movie for a phone call, an e-mail or a spreadsheet. She is younger than me, yet she has more grey hair. She is so tired and exhausted that every Friday night, she falls asleep as if capitalist vampires have sucked her dry of all energy. She gave up her dream of being a singer in order to boost someone else’s quarterly figures, just like lawyering once squelched my writing. She probably earns a hundred times more than me, yet I have a hundred times more time, more life, more peace. Granted, she could beat me at a game of Excel.

It has gotten considerably colder, windier, icier, chillier by now. The beautiful day has turned into a proper snowstorm, as many things in life do. Pondering the situation from which my friend sees no way out, although there are so many, I want to ride down the hill into town, storm the office tower and liberate her. But instead of a lance, I only have a pen.

The irony is, of course, that she will never have time to read this.

Travelling the world and writing about it. I have degrees in law and philosophy, but I'd much rather be a writer, a spy or a hobo.
View all posts by Andreas Moser →
This entry was posted in Canada, Economics, Life, Love, Philosophy, Photography, Time and tagged Calgary, friends, prison, romance, winter, work, writing. Bookmark the permalink.

47 Responses to A Lonely Walk in the Snow