“My shoulders are aching from the weight of the backpack, the sun is burning, the wind is blowing me backwards, I am running out of water already and I still have 125 km to go.” This was the entry in my travel diary penned down after walking for only 2 or 3 hours. No, this was no joy, this was no holiday, it was a struggle. A struggle against pain, fatigue and the temptation to give up.

I had set out to walk across England along the Hadrian’s Wall, a Roman fortification in Northern England. It was built after 122 AD to mark the northernmost border of the Roman Empire and to defend it against possible rebellions from the far North of England and from Scotland. The route of Hadrian’s Wall stretches from Wallsend in Newcastle to Bowness-on-Solway in the West.

I left Newcastle on the beautiful sunny morning of 6 June 2011, walking westwards and following the well-signposted Hadrian’s Wall Path which meanders along the original route of the Wall for around 84 miles = 135 km. Newcastle looked like an interesting city, but I rushed out of it because I couldn’t wait to get to the nature and away from the bustle of traffic, commerce and people.

After leaving Newcastle, the route becomes quite beautiful, through forests and parks, along golf courses and across meadows. But no sign of Hadrian’s Wall yet until Heddon-on-the-Wall, a cute little village that I reached via an unforgiving steep and long ascent. But once that climb was mastered, I was finally rewarded with the first piece of Hadrian’s Wall. 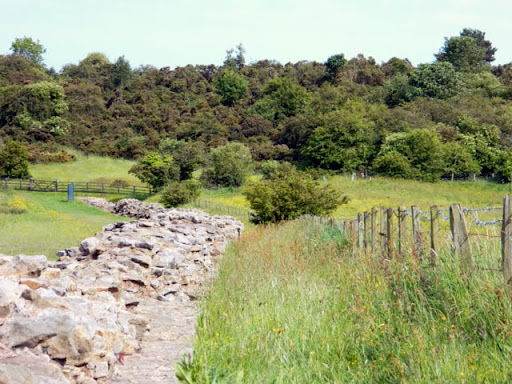 And one more to show you how happy I was to finally have reached the first evidence of this Roman structure: 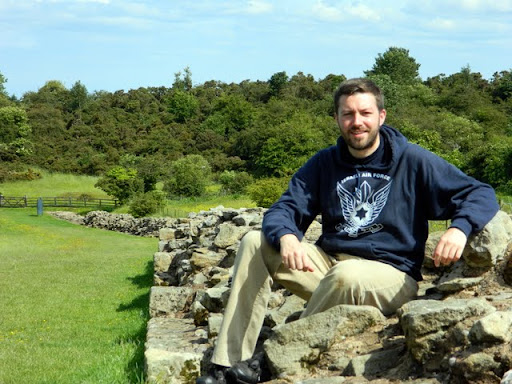 The day continued to be sunny and hot, the walk continued to be strenuous. The intervals between my rests became shorter. Each time I fell down in the grass, I was so exhausted that I could have fallen asleep better than in the most comfortable bed.

But I had to carry on. Not that I had a specific waypoint in mind; I had simply given myself a bit more than 5 days to complete the whole journey across the country. But especially on the first day, I wanted to walk as far as a I possibly could.

Luckily, from time to time there were funny sights that interrupted the monotony of walking: 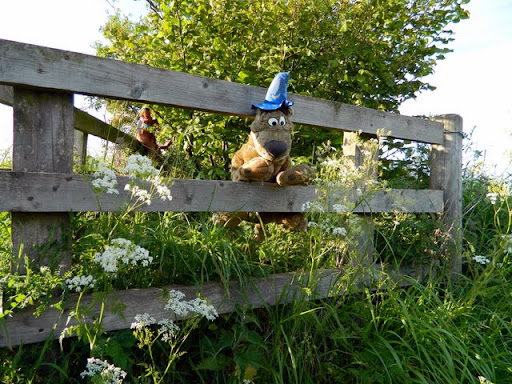 And then of course there were the sheep, thousands of sheep:

One interesting phenomenon was how long it was light in the evening (and how early it would become light the next morning). This far up in the North, it was light until around 2245. Even long after the sun had set behind the horizon, there was still enough light for a long time to search for an appropriate campsite. I had vowed not to sleep in any man-made housing and not even to use official campsites, but wanted to camp wild. I settled down for the night under a row of trees between two fields close to Portgate.

Not having bothered to carry a tent, I had to attach a tarpaulin to a tree to protect me a bit from the fierce wind. It was still cold, despite sleeping bag, bivouac sack and almost the whole range of clothes that I had with me. 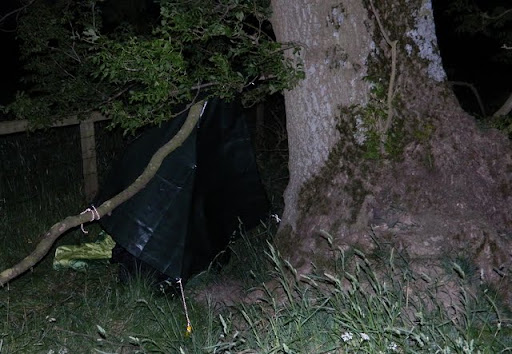 It was an uncomfortable, windy, sometimes rainy night that ended early with the sun rising at shortly after 0300: 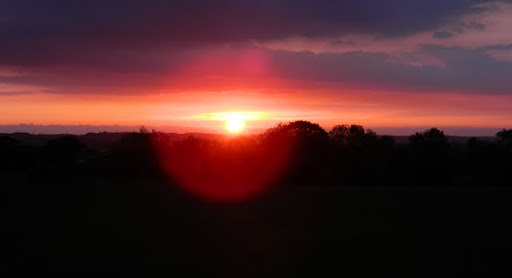 I hadn’t had a pleasant or comfortable night, but being woken by the sun put me in an upbeat and positive mood nonetheless. I packed up quickly and got walking again. 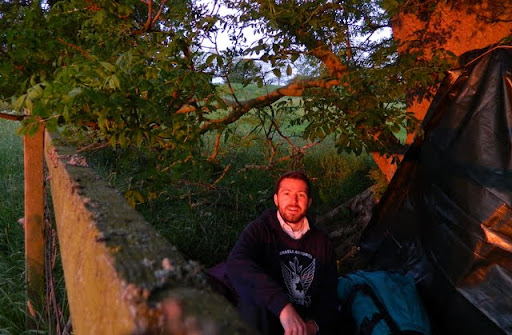 On the second and third day, more and more parts of Hadrian’s Wall became visible: 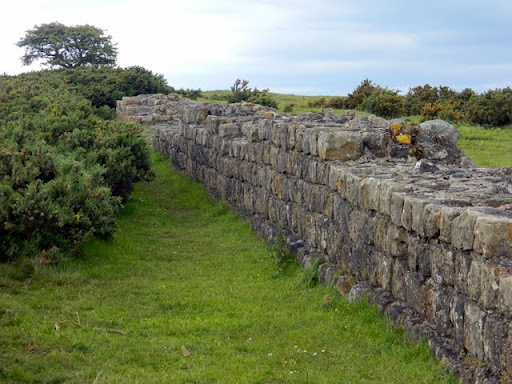 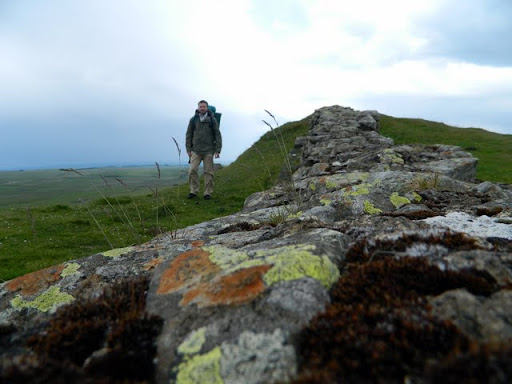 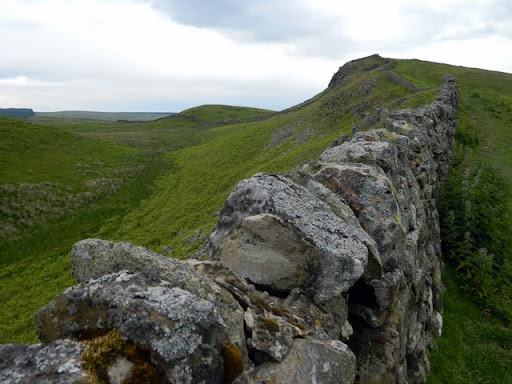 And not only the wall itself, but also some other remnants of Roman civilisation, like this Mithraic temple at Brocolitia

or the fort at Vercovicium: 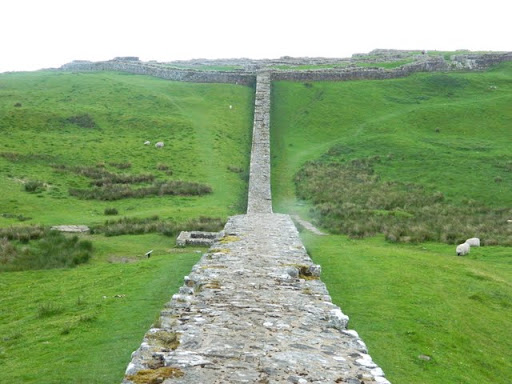 Living in London, I always thought England was rather flat. But up north, it’s actually quite hilly, as I became painfully aware, having to conquer one hill after another, all the time the view of more threatening hills on the horizon.

I guess my exhaustion is visible: 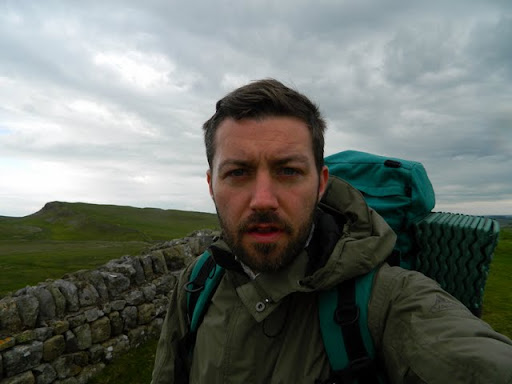 In the middle section of this walk, England is extremely empty. Sometimes, I don’t see villages for several hours, something which is very rare for this densely populated island. There are however a few other hikers, most of them not walking alone but as a couple or with friends. People are very friendly and often start a chat or walk together with me for a while.

But it’s not only people that this part of England is empty of, it’s also only sparsely vegetated. This poses a problem when looking for a place to sleep for the night. Where do you put up your camp in an environment like this: 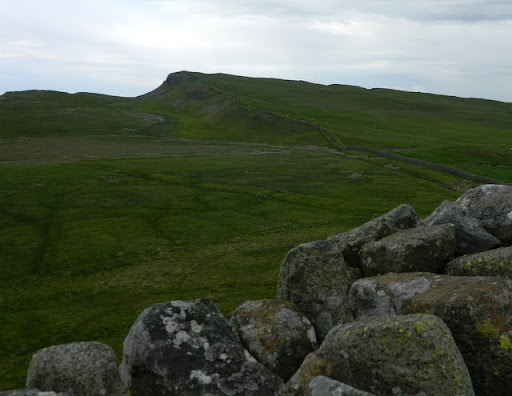 For the second night, I had to sleep under the open sky in a field with sheep, only using a wall between two fields (not the Hadrian’s Wall) as a slight protection against the wind. It was a shorter night even than the first one.

But getting up very early had the advantage that I was already up on Hadrian’s Wall when the sun rose. 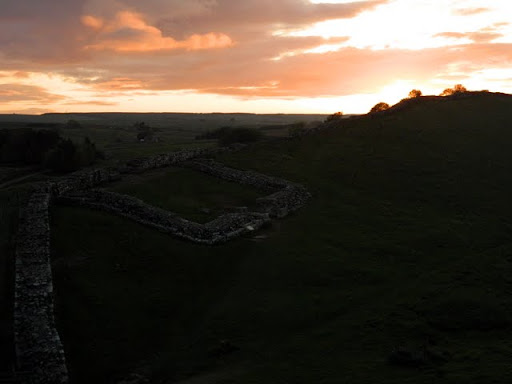 I didn’t see another living being for another few hours until I came across these cows which blocked my path so vehemently that I had to take a rather long detour. 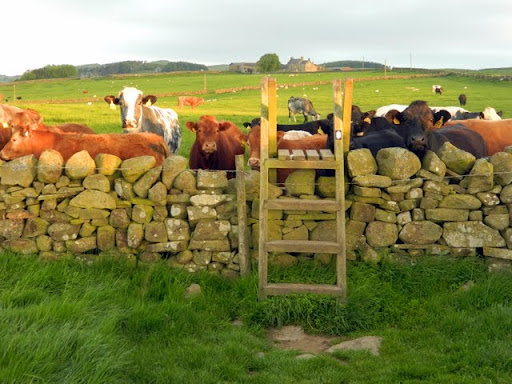 By day 3, the walk had become an ordeal. I was slow and every step hurt. It had turned out that my biggest mistake had been to take all the food supplies with me that I would need for 5 days. This made my backpack extremely heavy, hurt my shoulders, slowed me down, demotivated me, and worst of all deprived me of the food in some of the pubs on the way which was most likely better than anything that I could cook. At one point I took the decision to discard 4 remaining cans of food for the sake of decreased load weight. (At first I felt stupid for taking all my food with me when the other hikers enjoyed burgers in a pub but then I came across another guy who had done exactly the same, and had also thrown away some of his food.)

At the end of day 3, my morale was very low. It had been raining, I was cold, I was deprived of sleep, I was dirty, every part of my body ached. When I realised that I could still reach Carlisle on that day (not because I had been fast but because I had started to walk at 0300), I decided to make a reservation for a slightly different kind of camp for this night. I deviated from my original plan and checked into the County Hotel in Carlisle. Because I was quite ahead of my original schedule, I didn’t feel bad about taking a long shower and sleeping in the next morning.

On day 4, I was therefore refreshed and could go for the final stretch from Carlisle to Bowness-on-Solway, a trip of about 22 km. This was much less than I had covered on any of the previous days and it was over very flat territory, so it was a rather relaxing end of the tour so that I reached the coast after a few hours and finally smoked a cigar as a reward. Actually, I smoked even two. 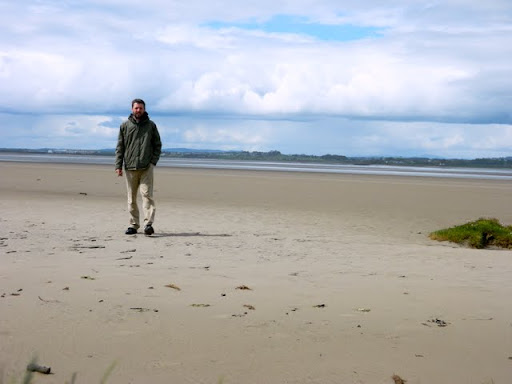 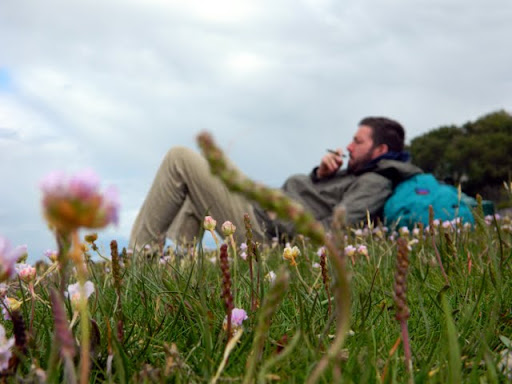 Overall, it was a really tough trip, stretches of which were a bit monotonous. But there was also some striking scenery and natural beauty. The best thing is the relative solitude, especially in the middle section of the walk. It was an interesting experience to walk for 4 days without any internet, newspaper or radio and with almost no interaction with other people. I realised again how much I prefer nature over civilisation.

The moments I enjoyed most were the rests, when I fell down on the grass after walking for 2 or 3 hours, totally exhausted, enjoying the sun and the countless shades of green around me, listening to the sheep’s concert, my head resting on my backpack. Maybe it is only the preceding effort that makes the rest so fulfilling; but maybe lying in the middle of nature is also a beautiful experience without any physical effort. I’ll have to try that once.

If you have not been dissuaded by this account, please read my advice for walking the Hadrian’s Wall Path.

Travelling the world and writing about it. I have degrees in law and philosophy, but I'd much rather be a writer, a spy or a hobo.
View all posts by Andreas Moser →
This entry was posted in Photography, Travel, UK and tagged adventure, Hadrian's Wall, Hadrian's Wall path, hiking, Romans, Scotland, walking. Bookmark the permalink.

36 Responses to Walking along Hadrian’s Wall