I had long been too snobbish to read graphic novels. Cartoons like Tintin or Calvin & Hobbes are great, but when it comes to serious subjects, I prefer prose. Also, I read a lot on trains or in restaurants and didn’t want to be seen with a comic book in public. Silly, I know. But now I am cat sitting, where I am pinned to the couch for hours, and it’s too cold to read in the park anyway. Thus, when a friend, knowing of my interest in Iran, gave me Persepolis, I was delighted and ready to change my opinion of graphic novels. 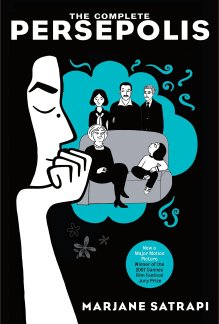 The style is clear, precise, not overloaded with details. Ligne claire is the expression, I believe, and I like it. It allows you to read quite quickly, and you know that everything that is drawn has some importance. There are no decorative or distracting accessories.

The second thing that I really liked is the perspective of the little girl, Marjane Satrapi herself, growing up in Iran in a liberal, secular, middle-class family, witnessing the 1979 revolution, suffering from oppression and religiosity and of course soon from the 8-year war between Iraq and Iran.

This is of course the story of many Iranians. When I was in Iran in 2008 and 2009, I was surprised how many families still maintained a liberal, secular worldview, holding on to private freedoms, treasuring them at home or with like-minded friends, and passing them on to their children, all the time trying to dodge at least the sharpest repercussions from the regime.

The viewpoint of a child is highly advantageous in that she can be funny about serious issues, without it seeming out of place. Many of her classmates’ parents or relatives are imprisoned because of their opposition to the Shah (this is before 1979) and she is a bit jealous of them. When her uncle becomes imprisoned, he becomes her absolute hero.

Once the war starts in 1980, the class divisions also become quite obvious. It’s mostly the children from poor, rural families who get drafted to walk through minefields.

The only thing I found a bit difficult to believe is that Ms Satrapi already read Marx and Hegel and was discussing dialectical materialism when she was twelve or thirteen. But maybe there are families like that, and I have just been unlucky in that regard. On the other hand, my childhood home was never bombed by Saddam Hussein, so I don’t want to complain.

When Ms Satrapi is fourteen, her parents worry too much about their daughter’s safety. They send her to Austria in a kind of Kindertransport. Again, this is something that most Iranians could not afford and which shows the class distinction. However, even 30 years later, I know hardly any Iranian family in which the adult children haven’t left or aren’t trying to leave Iran. At the time depicted in Persepolis, nobody thought the Islamic Republic would last that long. 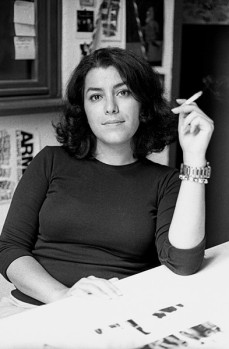 The funny thing in Ms Satrapi’s case is that she had been attending a French lycée in Iran until 1979, when it was forced shut, and was sent to a boarding school in Austria, which was run by Christian nuns and much stricter and more religious than anticipated.

As she moves to Austria and grows up in a foreign country, the book shifts more to her personal development. For my taste, there is too much about relationships, sex and drugs. I am sure some readers, maybe those of a similar age to the protagonist at the time, find that interesting, but I would have been more interested in Marx, Bakunin and the immigrant experience (which is covered a bit).

Even as she returns to Iran after a few years in Austria, the book remains focused on private life. She eventually goes to university in Iran to study graphic design, which is where the book becomes more interesting again. Here again, it’s about the constant battle between citizens and the state. There were some interesting revelations, which I won’t spoil for you.

There are a few aspects which I liked less, for example the rather harsh treatment of older women, of whose physical appearance Ms Satrapi often makes fun. But then, it’s written from a child’s or a teenager’s perspective, and maybe young people talk about adults like that. (I forgot because it was so long ago.)

At times, the character just isn’t likable at all, quite self-centered, full of pity. In my mind, her parents and her grandmother are the real heroes, and maybe I would have enjoyed a book about them even more. Like hundreds of thousands of Iranian parents, they have sacrificed their whole adult lives for their children, without having them around or even near, while parents in other countries can usually relax and lean back or travel the world once the kids go to university. Ms Satrapi went to France after graduation, and it’s her parents who tell her not to come back to Iran, but to enjoy freedom.

And then, there should be a word of caution. While Persepolis will bring valuable insight into Iranian society, particularly to people who haven’t been to the country themselves, it should not be taken as a scholarly or even journalistic work. Wile the character is thoughtful of her role within family, school, relationships and society, she lacks reflection about the role of Iran in the world and too often assumes the national(istic) narrative of Iran/Persia as a superior civilization whose suffering can possibly only be the result of mischievous machinations by, not very creatively even as conspiracy theories go, the USA, the UK and Israel. If the clever child really read all the works of political philosophy, she shouldn’t be quite so gullible.

But then, nobody who reads a graphic novel should expect serious analysis. To people who mainly read Persepolis because, as a graphic novel, it’s quick to read (an advantage I acknowledge and which makes me more open to other graphic novels), I would recommend Shah of Shahs by Ryszard Kapuscinski. At 170 pages, it is quite a quick read, too, and it may be one of the best books not only about the 1979 revolution, but about revolution in general.

Travelling the world and writing about it. I have degrees in law and philosophy, but I'd much rather be a writer, a spy or a hobo.
View all posts by Andreas Moser →
This entry was posted in Books, Iran and tagged cartoons. Bookmark the permalink.

10 Responses to “Persepolis” by Marjane Satrapi