I am bored by terrorists

I check where (Barcelona) and how (running a car into people). On Las Ramblas, where I have been already, where I went for a walk, where I ate, where I read a newspaper.

That should touch me, bring back memories, arouse a feeling of worry for my friends in Barcelona.

But it doesn’t. I don’t even turn on CNN, I don’t watch the news at night. Instead, I keep working, have dinner, go for a walk and read a book. A perfectly normal evening. An evening with at least 12 people killed.

From time to time, one reads that we have become indifferent to terrorism, but “indifferent” sounds so emotionally cold. I would rather call myself “immune”. But when I am completely honest, I feel something else. I am neither indifferent nor immune, I am simply bored.

Terrorism doesn’t terrorize me anymore. It hasn’t for a long time. It only bores me. I do not feel any fear, not in large cities, not on a plane, not at train stations and not in pedestrian zones. I am not even scared in the immediate aftermath of a terrorist attack. If at all, the bombs and knife attacks are annoying, like a sudden downpour, a traffic jam or a power outage. I know that it will pass, that it will happen again one day, and so on.

It’s not only due to the frequency of terrorist attacks in recent years that they hardly make me yawn, it’s also their methods. Already in 2013, I had predicted that terrorists would increasingly focus on car attacks. But the disciples of terrorism turned out to be even less inventive than Hollywood with its never-ending sequels. Driving a car into a crowd or onto the sidewalk? Any old geezer whose licence should have been revoked long ago can do that. Every weekend, people die in road accidents, without any help from terrorists. That’s really nothing special. And knife attacks? We get that in every horror movie. People pay to see that. Even the suicide bomb is stale and boring, and in most cases only kills the amateur terrorist himself.

Even the most deluded terrorist has to recognize that attacks like that won’t get him into the news more than once. And the next day, there will be baseball, a Hollywood divorce and a redneck lottery winner again.

Dear terrorists, you are making fools of yourselves with your dilettantish wannabe-terrorism. There are high-school pranks and celebrity tattoos that scare the population more than you with your little bombs and knives and vans. And your targeting couldn’t be more petit-bourgeois either: Christmas markets, street cafés and supermarkets. That way, your message will never reach the really cool people. Why don’t you take a break for a few years to plan something big again? Maybe hijack two cruise ships and ram them against each other. Delete all Facebook and Instagram accounts. Develop a virus that turns cats into aggressive monsters. Blow up the moon. Dream big!

But as boring as the terrorists are, the reactions are equally boring. Every time the same.

Politicians will demand new laws for electronic surveillance, which doesn’t seem to help. Or more surveillance cameras, which logically won’t prevent attacks by people who want to be on TV.

“We can’t continue like before,” one will hear, followed by the exact same opinions and demands that the person held before the terrorist attack.

I don’t have the impression that a great many people change their behavior because of terrorist attacks. Those who are generally scared have one more reason to be scared, in addition to crime, traffic, thunderstorms, floods, epidemics, mosquitoes, postal employees with guns, ticks, snakes, black ice, bears and Bolsheviks. And those who are generally more optimistic won’t believe that the Al Qaeda van will hit exactly them. But to me, it doesn’t look as if there are fewer people in the streets or in other public places. Even after the truly terrible terrorist attacks on 11 September 2001, the number of people flying decreased for only a short time, and probably more due to the annoying security measures at airports.

There will also always be someone who wants to be overly dramatic and who will scream out the sentence “this is a war”. No, a terrorist attack is a crime, but no war. War is months or years of fighting, killing, bombing, starving and dying in a whole country or a large part thereof. In Barcelona, within two days at most, you will see tourists walking down Las Ramblas again, taking selfies and not getting full from the overpriced little tapas plates. War is something different.

Regarding terrorism as what it is, a crime, helps to realize that it is a part of life. Unfortunately. Just like there will always be homicide, burglaries, car theft, fraud and rape. We’ve always had laws against all of this, and we’ve been listening in on telephone and online communications. Of course we should prevent as many crimes as possible and protect as many victims as possible, but nobody would seriously expect the murder rate or the number of rape cases in Europe or in North America to go down to zero. Anyone who promised that would (hopefully) not be taken seriously. Terrorism cannot be any different.

Lastly, we hear after each terrorist attack: “Oh my, oh my, the world is becoming more dangerous/bad/terrible,” oddly enough often from old people who should know better. 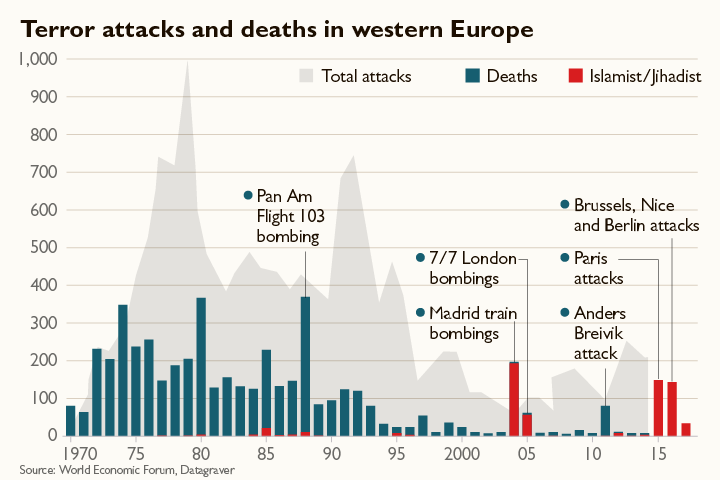 Admittedly, it doesn’t help anyone if we older people remind the younger ones that we used to be blown up at funerals in Ireland

and that plane hijackings were an almost daily occurrence in the 1970s.

But knowing that we did survive worse may help to recognize that the apocalypse won’t be coming around the corner any minute just because a few psychopaths want to put on a show.

Travelling the world and writing about it. I have degrees in law and philosophy, but I'd much rather be a writer, a spy or a hobo.
View all posts by Andreas Moser →
This entry was posted in Politics, Spain, Terrorism and tagged Barcelona, Statistics, Terrorism. Bookmark the permalink.

3 Responses to I am bored by terrorists