The Church of the Holy Sepulchre in Jerusalem

Hidden in the labyrinth of the Old City of Jerusalem, it looks rather unimpressive from the outside. You could almost walk past the church that was built over the spot of Jesus’ crucifixion and his grave without noticing that there is any church at all. But in the dozens of churches, chapels and shrines inside the Church of the Holy, you can easily spend a few interesting hours. Even as an atheist.

Here, services are still shrouded in secretiveness. Hymns are sung in Latin, Ancient Greek or Aramaic to prevent the common worshipers from understanding anything. But the monks and deacons also speak English when they try to divert streams of visitors: “Move!” “It’s closed!” “This way!” Like bouncers in front of a popular club. Only the pigeons flying around inside the large cupola are free to roam around.

Listening closer to the flurry of languages among the visitors, one could assume that most Christians are Russian. Russian women, to be precise, because the men look rather bored walking behind their headscarf-covered wives. The women on the other hand look as ecstatic as if they had just fallen in love. Only Nigerian women are even more in a state of trance than their Russian sisters. Many of them light twenty candles at once. As soon as the believers leave however, a nun comes by and removes the candles that have just been donated. They can be sold to the next hapless person who thinks this helps. 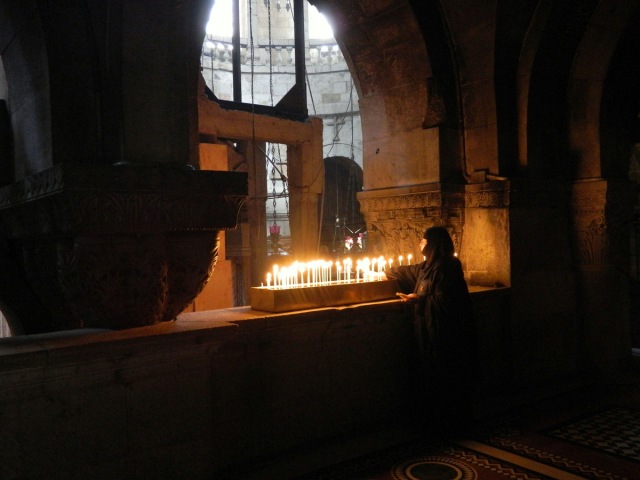 German tour groups are working their way through the church rather methodologically. “This is the Chapel of Saint Helena.” “Ok, then we still need to go to the altar of Mary Magdalene.”

Walking around the Church of the Holy Sepulchre, you can feel like Indiana Jones exploring. Up on a gallery, you find the altar of crucifixion. 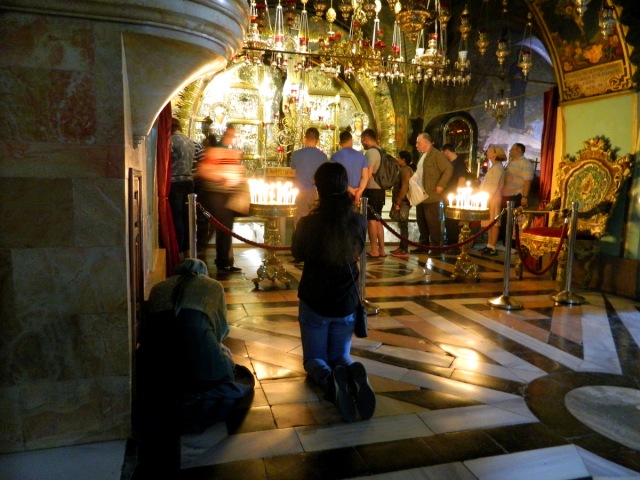 In the basement and second basement underneath, I venture into chapels, vaults and crypts. 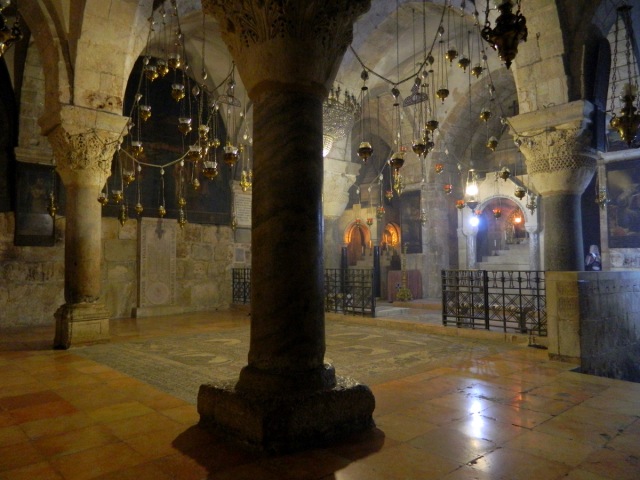 Behind the shrine for the actual grave of Jesus, to which there is a long queue of people who haven’t yet heard that their hero went to heaven, there is a small opening in the wall that you could easily overlook. Through a corridor that gets narrower and darker with every step, it leads to the grave of Joseph of Arimathea.

Electricity hasn’t yet been introduced to this dark corner. Candles light the way. A painting on the wall has been sooted beyond recognition.

When visiting a Protestant service in Central Europe, one could almost believe that Christianity exists in an enlightened form. But here I witness scores of Christians kneeling in front of a stone, kissing it for minutes and moving candles, icons and tablecloth above it, and I know that superstition is alive and paying hefty contributions to priests and churches. 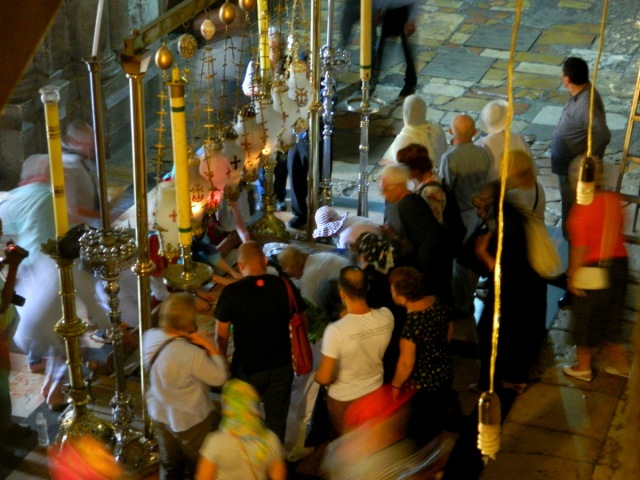 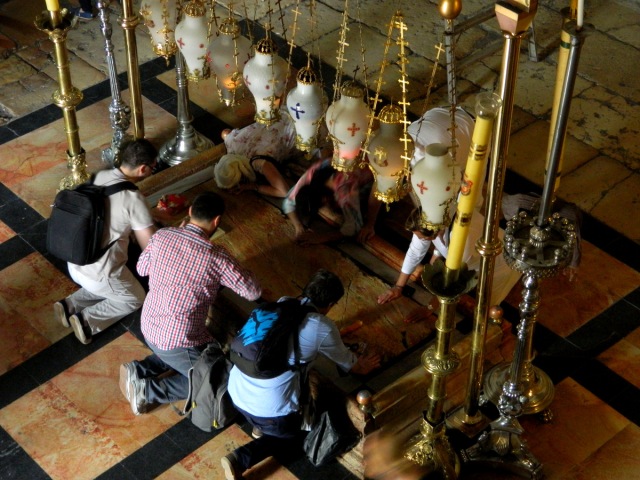 Some pilgrims swipe across an icon three times, bowing their head with each move. In the Catholicon, the largest church within the Church of the Holy Sepulchre, a woman has been resting her head on a stone pedestal for so long that I believe she must have fallen asleep. 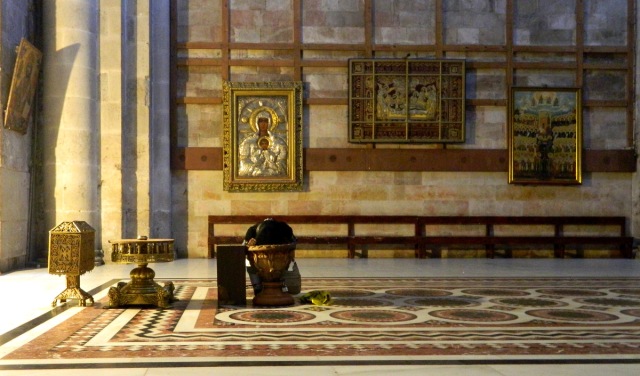 The air is heavy with frankincense, as if to enhance the spiritual obfuscation by medicinal means.

Despite all my incomprehension, I do have to mention one positive aspect: Here, Europeans, Asians (all of the men wearing suits, by the way), Africans, Arabs and Indians are sitting, praying and singing together.

A nun is trying to attract my attention, but for all the wrong reasons: She admonishes me that I must not cross my legs while sitting in one of the pews. With evil and strict eyes, she looks out of her chador. Who makes up such rules?  In 13 years of attending school, I was admonished less than during this one visit to a church: don’t stand there, don’t take photos here, don’t sit down, and – that really crossed a line for me – why I don’t kneel down. I am only a guest, but I won’t allow the keepers of the Grail to bully me around.

Not many visitors find the way to the small, unmarked side entrance to the right of the courtyard in front of the church. The door is open. The guard is sleeping, which is not a surprise given how dark the room is. Or maybe he is already dead. Who knows how often this place is cleaned. It could be easily cleaned out however, with such a keeper. There would be a few dollar bills on a silver plate, literally.

The paintings in this church are more colorful and with writing that I can’t decipher. A very narrow staircase hewn into the rock leads me to an upper floor. The same foreign style, just more light. Only from looking at the other visitors can I tell that I am in an Ethiopian church. Ethiopian Christianity is one of the oldest in the world and due to its isolation from the rest of Christianity, it maintained its very own character. 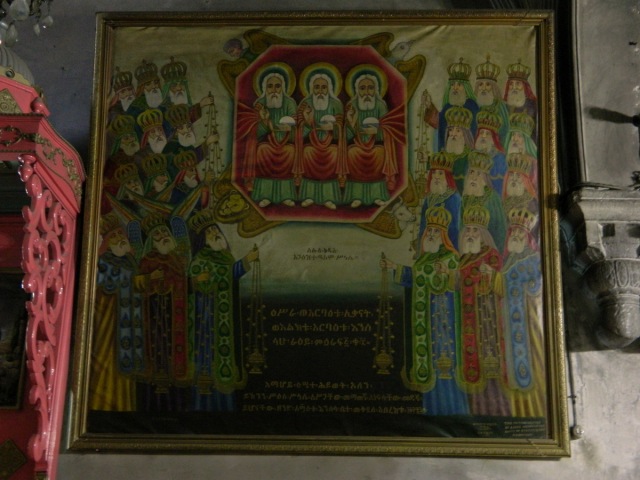 Now I have reached the roof of the Church of the Holy Sepulchre, from where I can see five spires at once. Walking across the roof, I get to the Orthodox Copts. Until now, I hadn’t even known that there are different Copts. With every new room of this property, Christianity becomes more complicated. 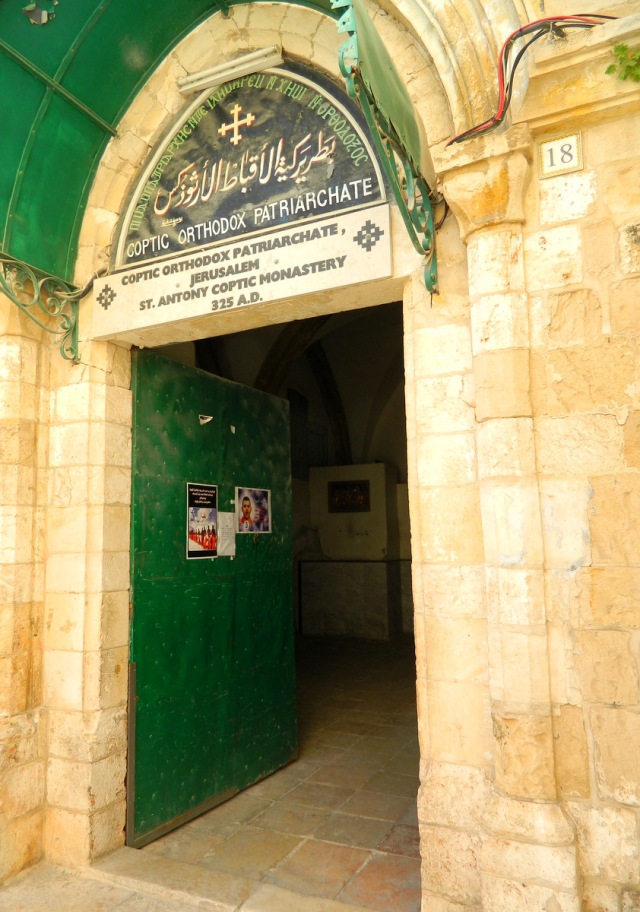 Just as I want to put my foot across the threshold, I spot the poster on the door. Terrified, I tumble backwards, holding my breath. What is this? And why is it in a church? Photos of men kneeling in the sand, wearing orange overalls, their murderers standing behind them. Any second, their skin, veins and flesh will be cut.

Obviously these are the Egyptian Copts murdered in Libya in February 2015, but does this barbarity have to be depicted on a church door? Is this an attempt to revive the idea of martyrdom? Isn’t this propaganda exactly what ISIS wants?

As I step out of the Church of the Holy Sepulchre, I hear the call of the muezzin from the Omar Mosque, only 30 meters away. This is what I like about the Old City of Jerusalem, the three Abrahamic religions sometimes co-existing, sometimes competing in a relatively small area. Mosques, churches and synagogues are interlaced next to, above and with each other so closely that it would be impossible to divide the city along religious lines.

Speaking about different religions, there is no love lost between all the Christian churches represented in the Church of the Holy Sepulchre. They can’t even agree on opening and closing times. For 800 years already, it is therefore the Muslim families Joudeh and Nusseibeh who hold the only keys to this holy place of Christianity and who open the heavy gates every morning and close them at night.

Travelling the world and writing about it. I have degrees in law and philosophy, but I'd much rather be a writer, a spy or a hobo.
View all posts by Andreas Moser →
This entry was posted in Israel, Photography, Religion, Travel and tagged christianity, Jerusalem, Jesus, Jesus Christ. Bookmark the permalink.

8 Responses to The Church of the Holy Sepulchre in Jerusalem