Just as I leave the courtyard in front of the Church of the Holy Sepulchre in Jerusalem, walking through a small gate, there are two Muslim men waiting. One of them is wearing a white jalabiya, the long and wide-cut gown, and the type of beard brought into disrepute by Salafists. The other one is clothed casually, but also with beard and prayer cap.

They approach me in a friendly way. Of course I know what their end-goal is, but for curiosity’s sake, I play along. “Do you hear this sound?”, he asks, pointing upward with the finger. And, before I can even reply: “This is the call of God. God is calling for you, my brother, to follow him.” I point out that it’s probably the muezzin or maybe a recorded tape that is filling the Old City with its charming chants.

He laughs, extends his hand and introduces himself as Musa, the Arabic name for Moses and not dissimilar to my own name. I better keep this to myself, because I don’t want them to consider me a prophet. In the end, they might even ask me to deliver the sermon this Friday. 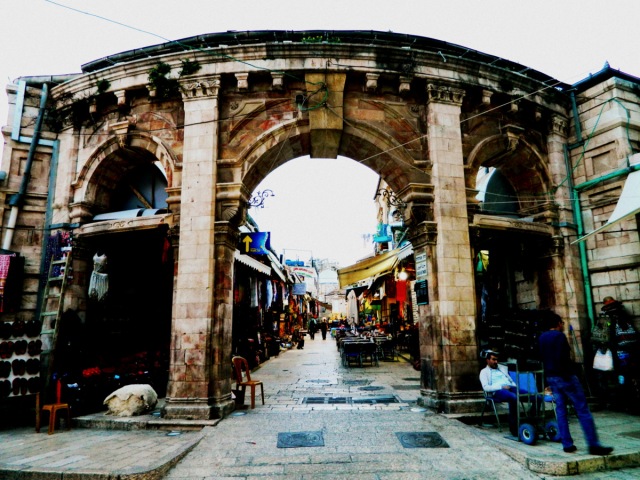 What follows is a back and forth of religious and atheist arguments and questions. I have gone through this with the Jehovah’s Witnesses a dozen times. It’s no longer intellectually challenging. These conversation all run so similar that I am getting the suspicion that both the Jehovah’s Witnesses and the Muslim Brothers have taken the same correspondence course in converting non-believers. They should both ask for their money back.

Musa’s sidekick hands me a small box of tasty strawberries, which he just bought at the nearby market, visibly excited that a bearded brother is sticking around for a longer discussion. But after ten minutes – the muezzin is still singing -, they are becoming restless. They hand me an English translation of the Quran, apologize for their hasty departure – “It’s the call for prayer.” – and then run off towards the Temple Mount.

They also gave me a business card, which asks “What is the religion of Jesus?” on one side and “?מהי דת הנביא משה” (“What is the religion of the prophet Moses?”) on the other. For me, this symbolizes the allure of Jerusalem: two Muslims waiting in front of Christianity’s holiest church in the capital of the Jewish State, trying to convert Christians and Jews to Islam. In the evening, at the appropriately named Abraham Hostel, I discover several identical copies of the Quran in the bookshelf as I place mine there.

The next morning at breakfast, Jessy from Tennessee wants to convert me to Christianity, claiming that chariots of Moses had been found in the Red Sea, which was proof of the parting of the sea. He apologizes to me and to God each time a “damn”, “bloody” or even “fuck” comes across his lips, which happens quite often. I don’t really mind, I am bothered much more by the Bible quotes.

After a few days in Jerusalem, all those religious nutters are becoming too much for me. I take my backpack and jump on the bus north, where I want to go hiking for a few days. From Nazareth to the Sea of Galilee. The hiking trail is called Jesus Trail. In Israel, it’s hard to escape religion altogether.

Travelling the world and writing about it. I have degrees in law and philosophy, but I'd much rather be a writer, a spy or a hobo.
View all posts by Andreas Moser →
This entry was posted in Islam, Israel, Photography, Religion, Travel and tagged christianity, Jerusalem. Bookmark the permalink.

14 Responses to Conversion in Jerusalem