The hotel at which I stayed in San José de Chiquitos (I didn’t find any Couchsurfing host there) banned not only the indoor use of dogs, cats and cigarettes, but also of coca leaves. 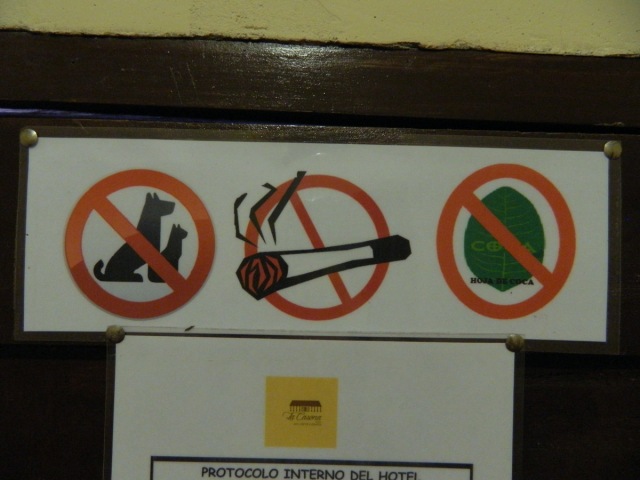 This prohibition surprised me because coca leaves enjoy a special status under the Bolivian Constitution, whose Articles 33, 34 and 380-392 not only protect the environment as a whole, but whose Art. 384 protects one plant in particular. (Actually, Art. 392 para. 2 also grants special protection to the rubber tree and to the chestnut tree, if I translated that correctly. Heck, I am a lawyer, not a botanist.)

It sounds strange how sentence 2 of that article tries to equip a scientific fact (of which I don’t know how undisputed it is) with unassailable constitutional backing. Sentence 3 lets the truth shine through: It’s not about protecting the plant, but the business and the jobs derived from growing and harvesting coca. Maybe the constitution was, like so many other things in Bolivia, sponsored by Coca Cola.

I am generally skeptical of overburdening a state’s founding or governing document with too many details. This is often an attempt by a large parliamentary majority (usually 2/3) to enshrine in the constitution what should really belong in regular laws to protect it from being changed once that side loses their super-majority. In other words, it’s an attempt to govern beyond one’s elected term.

Not only in constitutions, but regarding regular laws and contracts, I am very skeptical when it comes to verbose language that is hard to nail down. When my clients want to insert some lofty principles or ideas into contracts, I always ask them: “How do you want to enforce that?”

The Bolivian Constitution with its 411 articles is a bad example of such useless verbosity, which helps no one, except law students searching for the topic of an equally verbose and useless PhD thesis. Take Art. 8 para. 1 for example:

So I don’t have the right to be lazy? Or does this only concern the state itself? But then what happens if its highest representatives turn out to be liars? In reality, nothing happens. Good law-drafting is like good writing: if it doesn’t add anything useful, take it out.

Reading on, it seems that Bolivia is indeed opposed to laziness. I personally cherish laziness, so I am happy that Art. 108 no. 5 only applies to Bolivian citizens.

It’s tough enough that working is an obligation, but the phrase “according to one’s physical and intellectual capacity” is a huge burden to people with my range of talents and skills. “According to my physical ability,” does this mean I have to become a movie star? Or a special forces sniper? No, because Art. 108 no. 4 says that I have to “encourage a culture of peace”. But wait, Art. 108 no. 12 says that boys have to serve in the army, although Art. 10 para. 1 states that “Bolivia is a pacifist state”.

Wow, this constitution is a mess. Someone must have been on more than coca leaves when they wrote that. And we haven’t even started to discuss my “intellectual capacity,” which obviously would lie in constitutional law, among a million other things. What if I am qualified to work as a lawyer, but I prefer to write a weekly funny column for the newspaper? Or plant potatoes? Would I fall short of using my “intellectual capacity”? Who decides? What would be the consequences? How could anyone force me to be “productive”? Who determines what is “socially useful”?

This part of the constitution is made scarier yet because of its eerie resemblance to Art. 12 of the Soviet Union’s Constitution of 1936: “In the U.S.S.R. work is a duty and a matter of honor for every able-bodied citizen, in accordance with the principle: ‘He who does not work, neither shall he eat.’ The principle applied in the U.S.S.R. is that of socialism: ‘From each according to his ability, to each according to his work.’ ” Coincidence?

Art. 108 no. 6 which I have included above is also cute. An obligation to go to university and obtain a degree, well, that’s a perfect excuse for all these farming and mining children who are forced by their parents to contribute to the family income. “I am sorry, Dad, I know we need the bread, but it is my duty to study anthropology for four years.”

Anyway, now you see why I don’t have friends: We started talking about drugs, which caught your interest, but I ended up discussing political philosophy and constitutional law. Well, I better go to La Cancha market now and get a bag of coca leaves. – But we all know that I will end up at the library instead. 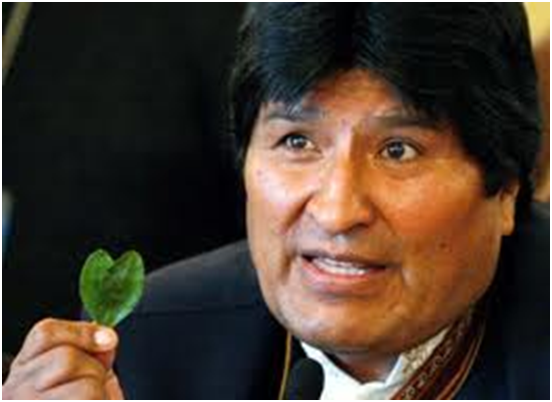 “Eat your vegetables!” (How could I forget to put this into the constitution? Another referendum, quick!)

Travelling the world and writing about it. I have degrees in law and philosophy, but I'd much rather be a writer, a spy or a hobo.
View all posts by Andreas Moser →
This entry was posted in Bolivia, Law, Philosophy, Politics, Travel and tagged constitutional law, drugs, Health, San Jose de Chiquitos. Bookmark the permalink.