It is not as bad as in dictatorships, but for a democracy, the personality cult surrounding President Evo Morales is quite strong. At Cochabamba airport, you already see a huge poster of the president from the tarmac, and all over the country, you hear, see and read “Evo”. In part, this is authentic admiration and affection for the first indigenous president, of whom even some critics admit that he did preside over a period of stable economic growth and that he began to tackle social problems which had hitherto been ignored. On the other hand, it sometimes seems to me like a substitute for a political agenda. “He is one of us” in lieu of debates about education, economic inequality, the economy’s dependency on raw materials etc.

It is not only because of this personality cult that I am skeptical regarding the planned amendment to the Bolivian constitution, with which President Morales wants to allow the re-election of the president to yet another term, in fact his own renewed re-election to a fourth term (and possibly beyond that, for he is only 56 years old and Fidel Castro is one of his heroes). This issue is subject to a referendum on 21 February 2016, for which I expect a close outcome, although the NO campaign may have benefited from a string of personal and government scandals uncovered in recent weeks.

More about this in the coming days (because today I am traveling in the east of Bolivia), but on the issue of personality cult, I want to share this photo with you. I took it today at the bus and train station in Santa Cruz. 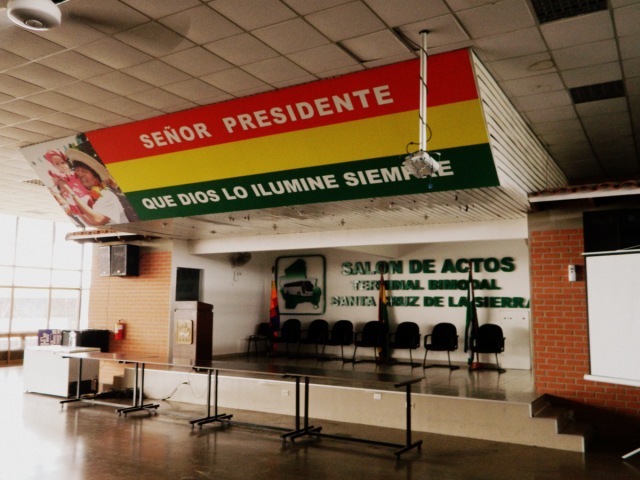 “Mr President, may God enlighten him forever.” The kitschy photo with the baby is a two-edged sword however, because one of the recently uncovered scandals involves a(nother) illegitimate child of the president.

Travelling the world and writing about it. I have degrees in law and philosophy, but I'd much rather be a writer, a spy or a hobo.
View all posts by Andreas Moser →
This entry was posted in Bolivia, Photography, Politics, Travel and tagged Evo Morales, Santa Cruz. Bookmark the permalink.

19 Responses to Personality Cult in Bolivia