Video Blog: How you wake up in Santa Cruz

It’s early morning in Santa Cruz in Bolivia. Although the smartest thing in this heat would be to get up and go to work at 5 o’clock, the Square of 24th September, named after a revolt on that day in 1810, is still almost empty at 8:30. Only a few shoeshine men and pensioners are already about.

And the band which woke me up. Despite the time it took me to shower and get dressed, they are still playing in full swing when I finally join the spectacle, which is largely and sadly devoid of viewers or listeners.

But listen and watch for yourself:

And it continued like this at least for another half hour. It seemed to me like the duration of the concert was timed exactly to cover the time needed to read El Deber, the local newspaper, drink a cup of coffee and smoke a cigar. 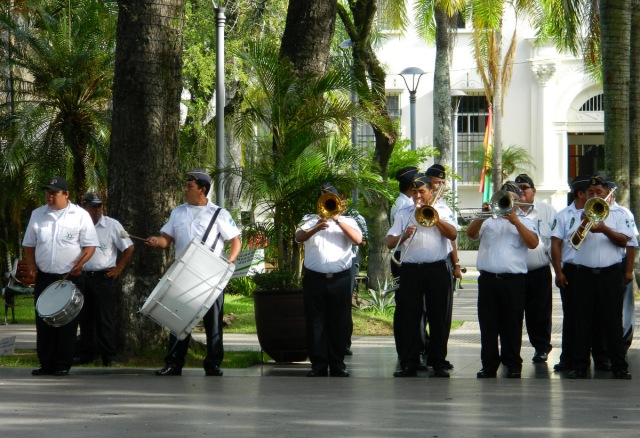 The apartments with a balcony facing the Square of 24th September must be really sought-after.

Travelling the world and writing about it. I have degrees in law and philosophy, but I'd much rather be a writer, a spy or a hobo.
View all posts by Andreas Moser →
This entry was posted in Bolivia, Music, Photography, Travel, Video Blog and tagged Santa Cruz. Bookmark the permalink.

3 Responses to Video Blog: How you wake up in Santa Cruz