Two things dissuade people from walking through the wilderness for days: the thought of sleeping outside and the lack of a shower. But, depending on the time of the year (midge season is worse than cold), sleeping outside can be more comfortable, more beautiful and definitely more interesting than spending every night of your life in a bed.

Showering/washing/bathing is no problem either. Even in the middle of nature, you encounter bathtubs from time to time, like this one which even had separate taps for cold and for hot water. 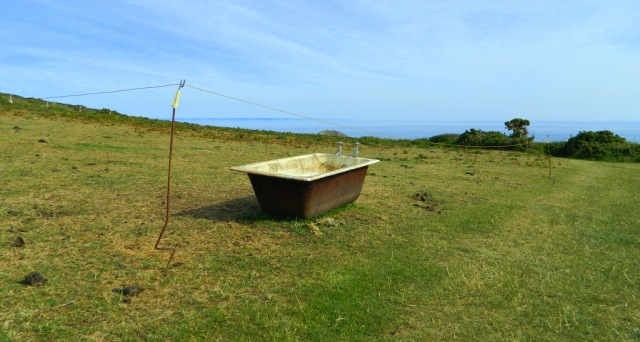 I saw this bathtub on Sark, but it was still too early for a bath, so I moved on unwashed. It is a small island and I figured there will be plenty of bathing opportunities later.

And indeed, when the time came to look for a place to spend the night, I accidentally discovered this beautiful spot on the west coast of Sark.

I had the whole bay for myself. In the light of the setting sun, I washed myself in the English Channel.

It was my 36th birthday. No cake, no presents, no guests, no calls, but the joy of having found paradise.

By the way, experienced hikers know that sleeping or bathing outside are not the greatest challenges, but that the heavy backpack is.

Travelling the world and writing about it. I have degrees in law and philosophy, but I'd much rather be a writer, a spy or a hobo.
View all posts by Andreas Moser →
This entry was posted in Photography, Sark, Travel and tagged hiking, nature, sunset, water. Bookmark the permalink.

2 Responses to Bathing in Nature