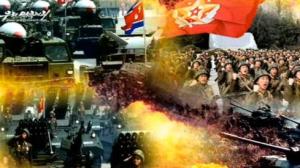 I have studied a great many wars, but I am not aware of an example where the aggressor state revealed its detailed step-by-step strategy in advance. In public. In a colourful video.

North Korea has the courtesy to do so and lays open its strategy to conquer and occupy South Korea in a war which will last only 3 days:

According to the translation by Stimme Koreas, the masterful plan will work like this:

On the first day, once the order is given, the North Korean people’s army will fire 240mm MRL (Multiple Rocket Launcher), 250,000 Medium/ long-range ballistic missile, and 1000 SSM (Surface-to-surface missile) for the first 30 minutes toward South Korea and the U.S. combined bases, like a shower from the heavens. We will launch a pre-emptive attack by surprise with hit-and-run raids.

A good surprise attack is best announced by video.

A sound military strategy apparently assumes that the enemy will do nothing at all in defence.

The Second Day: North Korea army’s powered offensive 10,500 North Korean air force paratroopers will drop from a 80 m high altitude. Meanwhile, 4600 tanks and 3000 armoured cars will head to South Korea. Our infantry troops will approach South Korea’s city and sweep them out. Of course, right after the War has began, we will strike the U.S.’s pacific ocean’s bases first and wipe them out.

The Last Day (The Third Day) South Koreans including from Seoul and other cities will be in a state of confusion without any food supply, water supply, communications network, and traffic network. On the last day of war, there will be no battle but North Korea army will occupy South Korea and make a stability operations such as restoring provision systems in South Korea. Like this, we have a Unification War scenario that will be finished in just 3 days. Even though the U.S. keeps practising the invasion of North Korea War scenario with computer simulations, they are trembling with fear and can’t disclose the scenario to the public.

In my eyes, this is less a threat against the USA as a whole, but a threat on Hollywood. These battle scenes and explosions are as good as those in Windtalkers. Hollywood, you better watch out. There is a new Kim on the block.

I wonder how you say “Dogs that bark don’t bite” in Korean. I also wonder if there is any military hardware left in North Korea after the production of this video.

Travelling the world and writing about it. I have degrees in law and philosophy, but I'd much rather be a writer, a spy or a hobo.
View all posts by Andreas Moser →
This entry was posted in Cinema, Military, North Korea, Politics, USA and tagged Hollywood, Korea, movies, war. Bookmark the permalink.