Honeymoon on a Train

The young man went to the dining car alone because the wife had a strict rule about not eating after 8 pm and, having crossed several time zones on the long train journey, she was unsure which of them to apply to her digestive system.

Not being used to going out alone, the young man chose a table occupied by an old man, not without asking for permission, of course. Permission was gladly granted, as the old man was tired of eating alone anyway and maybe, subconsciously, the longing for human company, not for a burger and a beer, had been the real motivation to go for dinner.

As always on trains, the conversation began with questions and answers about departures and destinations. The young man was happy to reveal that this was part of his honeymoon. The old man seemed to be traveling for fun, to visit some places that he had known decades ago and some that would be new to him.

Naturally, given the advantage in age, the old man had more stories to tell, and better ones too. He recounted the days of the gold rush, and the young man’s eyes lit up. He spoke of the war, and the young man listened wistfully. The old man had sailed in the merchant navy for quite a while, before containers were used, when you could still spend a few days in every port city, from Salvador to Cartagena, from Brindisi to Haifa. “Wow, I have always wanted to go there,” the young man exclaimed, over and over again.

“Where are you going next on your honeymoon?”, the old man inquired.

“Well,” the young man explained, “we actually have to fly straight home after this train journey. You see, we’ve just bought a house and we both need to work a lot to pay off the loan.” With neither of them wishing to explore that topic further, the old man helpfully continued with stories about pirates and whales and delivering supplies to Antarctica.

Finally, the young man was ready to get up, saying his good-byes, explaining “I need to attend to my wife. She wouldn’t like it if I am gone too long.”

“It was a pleasure to meet you,” the old man replied. “Having gotten to know you a bit, I would just ask you to keep in mind one thing. Sometimes, we feel that we have an obligation to someone because we promised them something. But we also have an obligation to honesty and truth, to our dreams and to what we really want. If we remain in a commitment, although we really want something else, we not only waste our own life, but also that of the other person.” And, after a short pause: “But now, you must go.”

The young man was startled, for he realized that the old man was right and that he could never unthink what he had just thought.

On the short way from the restaurant car to the coach, the young man tried to come up with a reason not to do what he wanted to do. No such reason came to his mind, and he couldn’t have claimed that it bothered him a great deal.

“Oh, you look happy! What happened?”, his newly-wed wife greeted the young man.

“Why, I am happy to see you,” he lied, because they still had three days to travel. 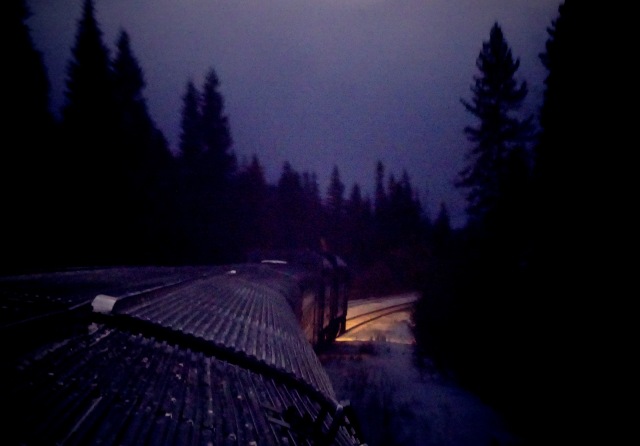 Travelling the world and writing about it. I have degrees in law and philosophy, but I'd much rather be a writer, a spy or a hobo.
View all posts by Andreas Moser →
This entry was posted in Life, Love, Time, Travel and tagged family, railroad, relationships, train. Bookmark the permalink.

11 Responses to Honeymoon on a Train