“Wild”, not a hiking movie

It’s winter and I am in a big city, so I felt like watching a movie about the outdoors and about hiking in anticipation of the coming summer. Wild, the story of Cheryl Strayed’s hike of the Pacific Crest Trail, promised to be such a film.

Disappointingly though, there is not much about hiking and the nature along the trail beyond what you already saw in the trailer. In the film, the walk is interspersed with flashbacks to a life of misery, drugs, affairs, death and confusing flashbacks within flashbacks. These bits and bobs of personal drama, completely irrelevant to the hike, didn’t manage to arouse any interest. Nor did the many scenes of Reese Witherspoon in the shower, I should add. All of this was rather annoying because it cut up what I had believed was the actual story. But maybe I had gotten that wrong.

Sure, there were a few mountains and sunsets, but for a 94-day hike depressingly little of it. In the end, I didn’t quite get how Cheryl had covered more than 1,000 miles, for I hardly saw her hiking. Maybe she hitchhiked most of it. 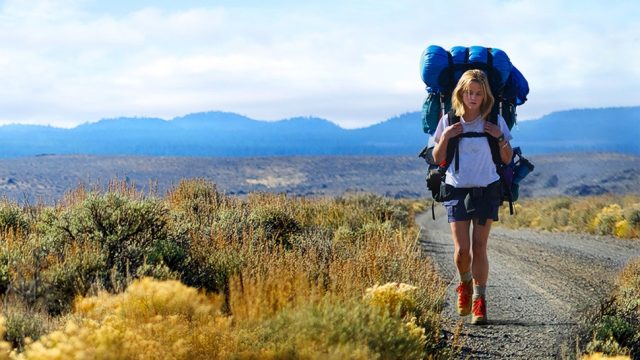 I also didn’t like how the film made it appear as if everyone going on a long hike has psychological issues. Not everybody going on a long hike is trying to overcome some trauma. A lot of us just enjoy being outdoors. We like the slow change of scenery, the surprise encounters on the way, being close to nature, the sense of achievement.

The only two good pieces of advice about hiking were (1) to carry as little as possible (but you already learned that from my hiking adventures) and (2) to have packages sent to you, using the poste restante service of post offices on the way. That’s something I hadn’t thought of yet, and I may utilize that on longer hikes in the future. Be prepared for me begging for chocolate and cigars!

But, to leave on a positive note, the music was good.

Trying to come up with better recommendations, I realize that hiking simply may not be suited for movies. Weit is the only one I can think of, but that’s in German. You are better off with books like Into the Wild (there is a movie version, but I haven’t seen it yet), A Time of Gifts or Walking the Woods and the Water.

Travelling the world and writing about it. I have degrees in law and philosophy, but I'd much rather be a writer, a spy or a hobo.
View all posts by Andreas Moser →
This entry was posted in Cinema, Music, USA and tagged Cinema, hiking, movies, Pacific Crest Trail. Bookmark the permalink.

6 Responses to “Wild”, not a hiking movie