Robert Harris, an experienced writer of historical thrillers, has taken on the Munich Agreement of 1938, in which Germany and the United Kingdom agreed that Germany could annex parts of Czechoslovakia. At the time, people believed that such a concession, at the expense of Czechoslovakia, which was not a party to the agreement, would prevent another world war. It didn’t. But you already knew that. 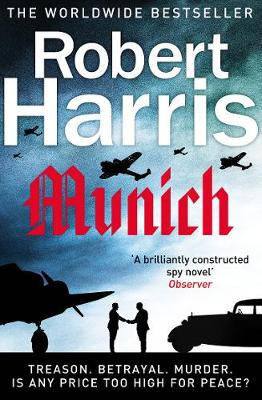 And that’s one problem with Munich. For how do you create suspense about a historical event that everyone knows, or of which everyone knows at least the consequences? An author who doesn’t want to wade into “alternative history” would need to find a subplot that is less known.

Harris picks two subplots, one real, one fictional. The Oster Conspiracy, indeed less known, suffers from the same fault as the main plot. We know there was no coup-attempt against Hitler in 1938. (The one you are thinking of now, remembering Valkyrie, was in 1944.)

The fictional subplot about two diplomats, one British, one German, who know each other from Oxford is basically limited to the German’s attempt to pass a document to the British without other Germans noticing. And that, in essence, is the whole book. It’s about people copying papers, transporting papers, sending telegrams and not receiving papers.

And yes, it’s as boring as it sounds.

But even worse than boring, the book is full of clichés. Hitler’s voice is always “like iron”, most Nazis are drunk and “smell of steel, leather and sweat”, and of course the two diplomats once had the same girlfriend whom they will meet again, in a plot twist which is neither plot nor twist, just pointless to the point of annoyance.

Many reviewers have, in the absence of anything else worthy of praise, applauded the meticulous research done by Harris. I couldn’t see it. For someone who writes in the afterword that he has been interested in the Munich Agreement for 30 years and who explicitly thanks his German translator and other experts for their help, the book is still full of mistakes. Hitler’s bodyguard unit was really not called “Liebstandarte”, as there was nothing lovely about them. When allegedly quoting German documents, Harris gets the German date format and place names wrong. Maybe worst of all is Hitler’s girlfriend, who is dubbed “Fräulein Brown” in this book.

If you want to read a really good book by Robert Harris, I recommend An Officer and a Spy about the Dreyfus affair. I am curious to hear how you rate his books. I have also read The Ghost, which I found too obviously anti-Blair, and Fatherland, which I read decades ago. I remember that I liked it, but I was a teenager back then, and I am not sure if I would trust my younger self.

Travelling the world and writing about it. I have degrees in law and philosophy, but I'd much rather be a writer, a spy or a hobo.
View all posts by Andreas Moser →
This entry was posted in Books, Germany, History, UK, World War II and tagged Czech Republic, Hitler, Munich. Bookmark the permalink.

4 Responses to “Munich” by Robert Harris