For world travelers, the German passport is the most useful passport: 177 countries can be visited without a visa or with only a visa on arrival. That saves money, time, effort and uncertainty. While holders of other passports are running from consulate to consulate with a stack of paperwork, the German explorer is already on the plane to Tuvalu or Mongolia. That usefulness might explain the desire of many to obtain a German passport.

Since February 2017 it’s possible to travel to Belarus without a visa (albeit only for a short stay), leaving Russia as the only country in Europe for which we Germans need a visa. But even here, I have a tip for you: student visas for Russia are issued free of charge. So if you conceal the real purpose of your trip (Transsiberian Railway) and claim a wish to study at the Obninsk Institute for Nuclear Power Engineering instead, you will save 60 euros. (“This blog saves real money and deserves our support!”, the excited readership is proclaiming in the author’s dreams.) 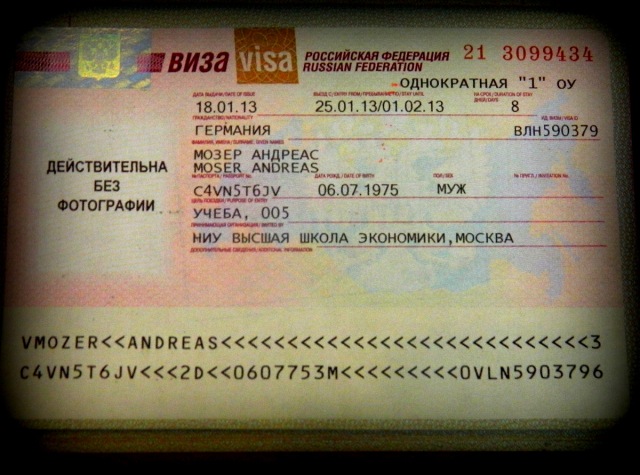 But the German passport has more advantages. Even in countries granting visa-free entry to other nationalities, one is often better treated with a German passport. In South America, for example, I heard a few times that US-Americans were turned back at the border because they didn’t have a vaccination certificate. I had one, but never had to show it. There simply is more anti-Americanism than anti-Germanism in the world. In Bolivia, I once sat in the park in Sucre when the police checked the passports of all foreign-looking people, recalculated the days spent under their tourist visas and asked a few guys to come with them (they were Argentinian, I believe). When I handed over my passport, the police officer only asked “Alemania?” and handed it back when I answered in the affirmative. (My visa had already expired and I was staying in Bolivia illegally.)

Especially in the Middle East, a German passport allows for much more relaxed travel than a US-American, let alone an Israeli passport. Just compare how long innocent US-Americans or Britons are kept in prison in Iran and that I (not quite as innocent) was released after only one week. The Iranian judge explicitly referred to the close historical ties between Iran and Germany: “After all, we are both Aryans.”

Even in regions rife with conflict, as a German, one is hardly ever targeted, if only because German arms companies are providing both sides with weapons. Another tip: print yourself a Heckler & Koch business card, and you will be treated like royalty anywhere from Homs to Kabul.

But the German passport also has a decisive drawback. Notwithstanding all the hype about “German quality”, it really is very lousily manufactured, almost like that job has been outsourced to China. Cornflakes and chocolate can easily be enjoyed way past their end date (yes, I tried), but the German passport will never last for the 10-year warranty period, at least not if you travel intensively.

This summer, I already had problems entering Armenia because the fabric cover was coming off and the meticulously checking border guards couldn’t believe that this would happen to a genuine German passport. And now, coming to Montenegro, the plastic card became loose. What’s the point of all the electronic chips, fingerprints and biometric photos if the Federal Printing Office doesn’t even use proper glue?

It has to be noted that this passport hasn’t yet reached the 60% mark of the promised lifespan.

The border guard at Podgorica Airport called a colleague and then his boss, all of whom again expressed the allegation that this passport was a forgery. (Why anyone should produce such a low-quality forgery, I don’t know.) They told me that I couldn’t enter the country like this, that I would need to wait at the airport and would be returned to Germany with the next plane. (Which is a weird threat to a person accused of somehow not being a real German, but that’s not Montenegro’s problem.)

Only due to my convincing and polite manner, pointing out that I had already rented an apartment for two and a half months, that I had been to Montenegro once before and that ever since it has become my heart’s dearest desire to spend more time in Europe’s most beautiful country, I finally received the coveted entry stamp. But now I will probably really have to apply for a new passport, or I will one day be stuck in the no man’s land between Macedonia and Kosovo or be refused re-entry into Schengen at the Hungarian border fence.

Travelling the world and writing about it. I have degrees in law and philosophy, but I'd much rather be a writer, a spy or a hobo.
View all posts by Andreas Moser →
This entry was posted in Germany, Travel and tagged German citizenship, German passport, passport. Bookmark the permalink.