The Island of the General 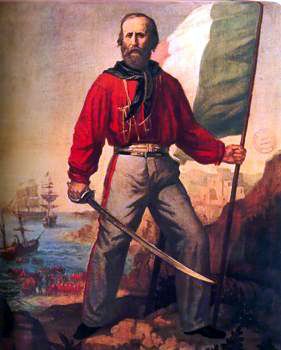 In November 1860, Giuseppe Garibaldi could have asked for anything. He had begun a campaign with less than a thousand men, but had marched from victory to victory. He had ignited enthusiasm for an idea that had seemed unrealistic until then: a unified Italy. For that idea, he had been sentenced to death, he had fled, he had spent years in exile, just to return to Italy again and again to fight for the country he wanted to create.

So the king asked the general what reward he wanted for his lifelong service. A cabinet post? Rule over one of the provinces? A castle? Nobility?

“Just give me a sack of potatoes, so I can start a farm,” the 53-year old replied, mounted a boat and sailed to Caprera, a small and rather inhospitable island north of Sardinia.

The journey to Caprera offers ample opportunity to become seasick, because first you need to get from Italy to Sardinia, then from Sardinia to La Maddalena and ultimately from La Maddalena to Caprera. As the islands are getting smaller, so are the boats. But to find out why “the only wholly admirable figure in modern history” (according to the historian Alan Taylor) withdrew to an island with a few horses and donkeys, I have to set out on this arduous journey.

Actually, I don’t need a boat for the last part anymore. A 600-meter long road has been built between La Maddalena and Caprera. Small boats can still pass through a bridge. A civilian speedboat is whizzing past the former naval base, while I am whizzing to the island of the national hero by bicycle. As we are going to dive into the history of the 19th century today, I find a vehicle from pre-modernity quite fitting.

Pine trees and a few eucalyptus trees provide some shade. When Garibaldi moved to Caprera, the island was almost completely barren because, like everywhere around the Mediterranean, the Romans had raged and cut down all the trees. (We are lucky that they never discovered the Amazon.) The wind is playing with the branches of the pines. Apart from that, it’s almost silent. Only a few birds are chirping.

At a picnic area, a bar made of timber bears the name “il barone rosso”. Hopefully, it was not named after the pilot from World War I, who bore the same title. Between the trees, there are a few unoccupied hammocks.

The road bifurcates. The Garibaldi Museum is to the left, the Garibaldi Memorial to the right. I’ll take the right turn for now. The higher I am struggling on the bike, the shorter the regular pine trees become, but the taller the mountain pines grow. At the summit, there is a rifugio for tired hikers with a seemingly endless supply of pine cones lying around, perfect for making a fire and a barbecue. Why is it that the most and the largest pine cones can always be found in places where the danger of forest fire prohibits the idea of lighting a fire?

From the Garibaldi complex, you can look down to the sea which is bluer than the Caribbean. Actually, if you know Sardinia, you don’t need to bother yourself with going to the Caribbean anymore. (And yes, I took it upon me to explore the Caribbean personally before giving this advice.) 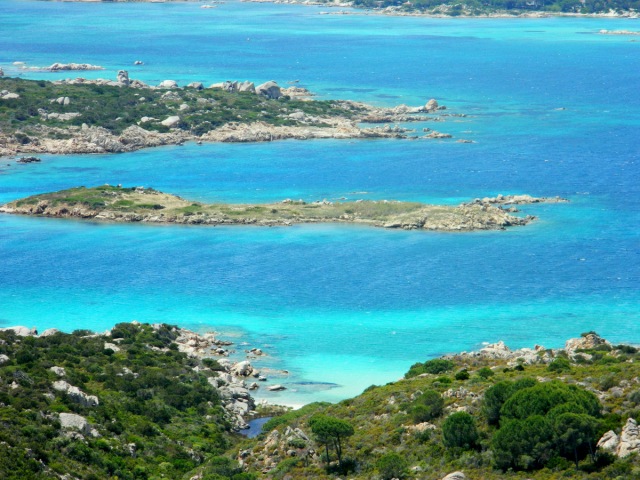 The memorial is an old fort, Forte Arbuticci, which had been in military use until World War II and on top of which a comparatively small museum has been grafted. Small, but nice. The museum is modern, multi-media, informative and interesting. But because most of the information is only in Italian, it’s good that you have dispatched me to translate everything for you.

Even better that I have come alone. Because in such a museum, I read all the boards, study all the maps and take pages of notes. The other visitors are rushing through the museum, watching a few video clips, going back to their car and speeding on. I can spend hours here. Maybe it helps that I don’t have a car waiting for me, but only a bicycle and the looming midday heat.

I will give you the summary: born in Nice, seafaring, journeys as far as Russia, rebellion in Piedmont, sentenced to death, escaped to South America via Marseilles, revolution in Brazil, fleet commando for Uruguay in the war against Argentina, returned in 1848 for the revolution in Sicily, leading the revolutionary army, flight to Tangier and New York after the revolution failed, journeys to China, Australia, Peru, Chile, shipwrecked, returned to Italy once again, fighting in the Alps, liberation of Sicily, capture of Naples, fight against the Pope, wounded in battle, prison, fighting for France in the 1870/71 war against Prussia.

But even more impressive than all the sailing and shooting and slaughtering are Garibaldi’s political ideas. He argued against the death penalty (granted, he had a personal stake in that), for general elections, for female emancipation, for a European federation, for self-determination of the Balkan peoples, for abolishing the papacy. 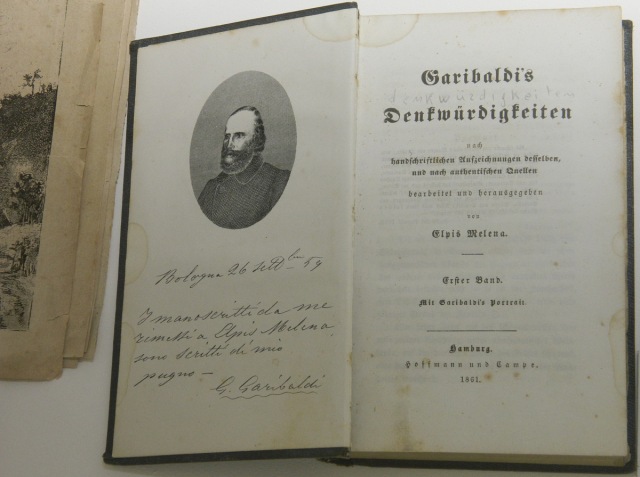 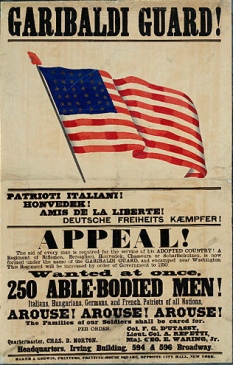 During the Civil War in the United States, the Union negotiated with Garibaldi, who was offered a generalship first and then the supreme command over all troops. But Garibaldi’s condition was that the war would be fought with the express goal of abolishing slavery. At the time, President Lincoln wasn’t ready to do that.

Because he fought in Europe and in the Americas, Garibaldi was called “the hero of the two worlds”. If someone had informed him about the situation in Congo or in Kashmir, he probably would have hurried there as well. Even units that had nothing to do with Garibaldi used his name, like the Garibaldi Guard in the US Civil War, the Garibaldi Battalion in the Spanish Civil War, the Communist Garibaldi Brigades in Italy during World War II and the Garibaldi Partisan Division in Yugoslavia.

So after a few hours, I feel like I know almost every private detail of Garibaldi. Finally, for I have already seen hundreds of statues and memorial plaques of him all over Italy.  Any village has at least a Garibaldi Boulevard and a Garibaldi Park. Though, in my opinion, the best memorial are the Garibaldi cigars, which are luckily also available in almost every village. And they are not even expensive. But I am wandering from the subject again, when the reader would prefer my gaze to wander from the fort across the island.

Caprera is rather paltry. Stony. Windy. The pine trees adorning the island now were only planted by Garibaldi. So he himself didn’t benefit much from them. There is a nice coast for some walks, but to spend all of retirement here? Someone must have been really fed up with humanity.

A lady working a the memorial explains the way back, but I have already discovered a shortcut on the map: a hiking path past a military exclusion zone and a holiday resort. Both of them deserted. The buildings are crumbing, a few plastic chairs are strewn about the resort, as if nobody had been here in months. Very spooky.

Especially in the south of Italy, I never understood why tourism is limited to two months in summer and it’s completely empty for the rest of the year. It’s May and it’s already warm, even hot, but my Italian friends are shocked: “Nobody is going to Sardinia now! We will all go there in August.” Even families without children, who would be independent of the school holidays, leave exactly on 15 August of each year, preferably going to the same holiday apartment in the same town where they have been staying for decades. The in-laws rent the holiday apartment next door, and they lunch and dine every day with the same people they already know from home. It seemed to me that not much value is placed on individualism in Italy. One reason why it was not quite the right country for me.

But today, I am alone and free like a revolutionary.

Although I feel well-informed already after the visit to the memorial, I continue to cycle to the museum in Garibaldi’s former house. There are a locomotive, a barrel for making wine, agricultural equipment, a mill and sickles. It looks like any museum of local history. 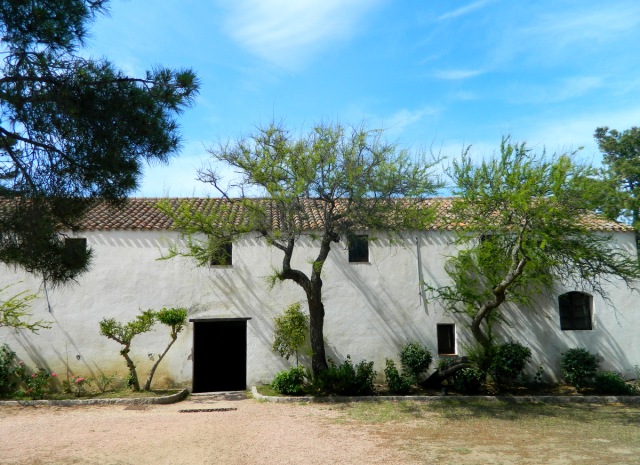 Inside the house, there are a small piano, a horse buggy, four sabers, five bayonets, paintings, maps, nine muskets. Comfortable and classy, but nothing pompous. The best thing is the view through the tall windows. The rooms are cooled by the wind. The children’s bedroom has the same beds as the one for the parents. Equality!

Two guards are observing me carefully, ready to intervene the second I would dare to take a photo of the inside of the house.

In the room in which Garibaldi died, there is a pair of padded crutches and some medicine next to the bed. From the deathbed, one enjoys a look towards Corsica. The calendar and the clock indicate that it was 2 June 1882 at 6:20 am, when a very full life came to an end.

Not without some logical consistency, the guided tour moves towards the gravestones in the garden, where photography is allowed again. Here too, simplicity and frugality rule. The general didn’t want anything ostentatious. His wife and his children at least got marble with inscriptions, but Garibaldi himself was laid to rest under an unhewn granite rock.

And that was it. The group almost got chased through the museum. I learned much more at the memorial site, and in a more relaxing atmosphere.

As I couldn’t dwell in Garibaldi’s White House as long as I had wanted to pay my respect to the place, I extend the bicycle trip around the island. Hilly roads and paths lead me to the southern tip of Caprera. Each bay is more beautiful than the last. Some of them with sandy beaches, 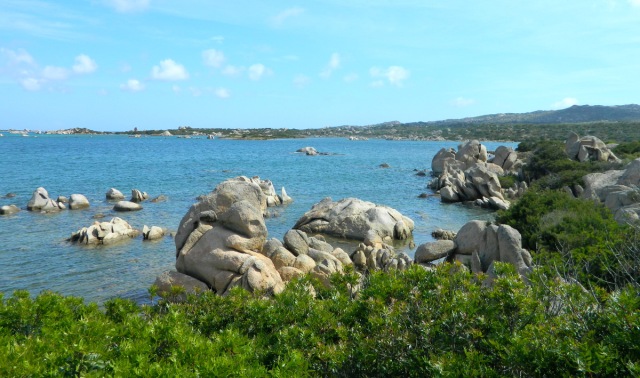 and all of them almost completely devoid of humans.

Finally, I find a place in the shade for a picnic, when something nudges me gently from behind: a pig! 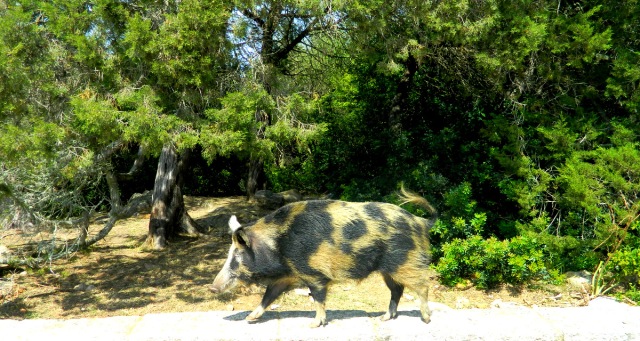 In the spirit of Garibaldi, purportedly an animal lover and vegetarian, I let it live. Also, it is so peaceful and friendly that it perfectly suits the island and the whole day.

Travelling the world and writing about it. I have degrees in law and philosophy, but I'd much rather be a writer, a spy or a hobo.
View all posts by Andreas Moser →
This entry was posted in History, Italy, Photography, Sardinia, Travel and tagged Caprera, Garibaldi, La Maddalena. Bookmark the permalink.

8 Responses to The Island of the General