Who refuses to read my Blog? The 15 missing countries.

On the lower right hand side of this blog you see a flag counter which records the number of visitors from each country. As of today, this blog has had visitors from 227 different countries. The US, Germany and the UK are the top three countries. (The distribution on my German blog is of course different.) From some  countries, like Chad, Guinea-Bissau and North Korea, I have only had one visit so far (hello, Kim Yong-Un!). The latest region to be added to the list was Mayotte on 7 December 2015.

Some smart-ass will say “But there are only 193 countries in the world”, probably referring to the number of UN member states. But of course you don’t need to be a member of the UN in order to be a state; just take the examples of Taiwan or Kosovo. And then there are a number of disputed territories.

In any case, just click on the flag counter on the right hand side to get the details. If you dispute the independence of Kosovo or believe that the Falkland Islands belong to Argentina, you can take your fight to the company that made this flag counter – or discuss it in the comment section below.

More interestingly, the flag counter also lists 15 countries from where my blog has not yet had a single visit.

The countries or regions that are still missing are:

Thinking about how this list will be reduced over time, I have been wondering: “Which country will be the last one to remain on this list?” Where will people refuse to read my writings until the bitter end? Or: where are people so happy that they don’t even think of wasting their time on the internet? – And I decided to make the promise (or threat) that I will visit the country which will be the last remaining one to have ignored my blog and I will then write and report extensively about it.

And because I know you love maps and flags, here is the world map with all the flags of the countries and regions from where I have had readers. Let the geography lesson begin! 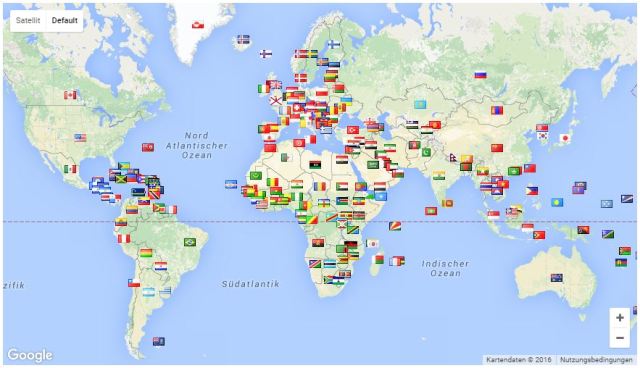 Travelling the world and writing about it. I have degrees in law and philosophy, but I'd much rather be a writer, a spy or a hobo.
View all posts by Andreas Moser →
This entry was posted in Maps, Statistics, Technology, Travel and tagged blogging. Bookmark the permalink.

27 Responses to Who refuses to read my Blog? The 15 missing countries.