Only vote while sober, please!

When I stepped into the convenience store on Avenida America in Cochabamba, I noticed something strange. A large section of the shop was cordoned off with black linen. It was the alcohol section.

“What happened?” I asked the shopkeeper, “Did you become Mormon or 7th Day Adventist?” “No,” he smiled, “it’s the law. We are not allowed to sell alcohol before and during the referendum,” referring to the vote on 21 February 2016 about the proposed amendment to the Bolivian constitution which would allow the re-election of the President for another (fourth) term.

And indeed, an ordnance passed by the Bolivian Election Commission stipulates the ban of sale and consumption of alcohol for 48 hours before an election or a referendum. It also bans the carrying of sharp or blunt objects, public performances and any motorized transport on election day. 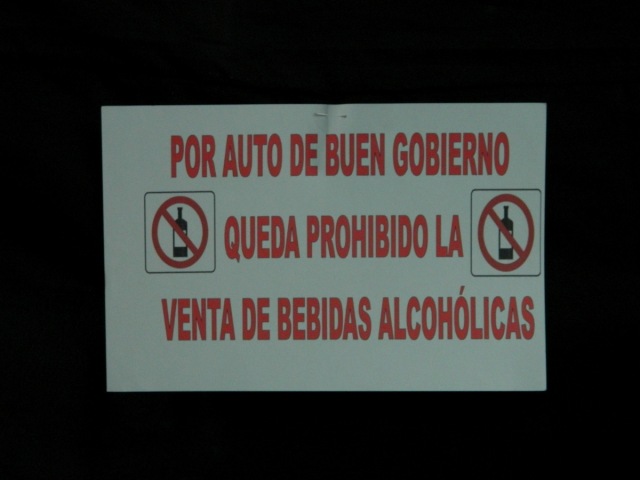 The purpose of the alcohol ban is for voters to have a clear mind when they make a decision on Sunday. Creative hot-shot lawyer as I am, I tried to argue that I am exempt from the ban because as a foreigner, I cannot vote anyway. Thus, it doesn’t matter how clouded my judgement will be tomorrow. The law doesn’t provide for such an exemption, but I argued for the necessity of a “reducción teleológica”, a teleological reduction which narrows the applicability of a law beyond its wording based on its intent, and was proud that I made up the right legal terminology in Spanish simply by guessing that it would be similar to the English or German one.

Needless to say, my argument did not prevail and I did not get any whiskey. Probably the shop clerk was right in rejecting it, because another purpose of the alcohol ban might be to avoid the anger and violence which can result from the combination of losing an election and getting drunk. And in such brawls, even I as a foreigner could be – and given my history of mingling in other country’s affairs probably would be – involved. Although Bolivia has been a relatively stable democracy since the 1980s, in light of the turbulent history before, with dozens of revolutions, military coups, counter-coups, maybe it’s better to be safe than sorry. On the other hand, banning public gatherings and public transport just makes a military coup easier because it’s harder for any opposition to organize. Anyway, let’s not cry wolf and let’s all get along regardless of whether we vote SI or NO tomorrow. Then we’ll also be able to drink again Monday night.

I haven’t been able to find out if the sale of coca leaves goes up during the alcohol ban.

This should also provide for interesting data on whether there will be fewer or more accidents (obviously only on Saturday and Monday when driving is not banned), fewer or more crimes, fewer or more hospital admissions than on comparable weekends.

Travelling the world and writing about it. I have degrees in law and philosophy, but I'd much rather be a writer, a spy or a hobo.
View all posts by Andreas Moser →
This entry was posted in Bolivia, Law, Photography, Politics, Travel and tagged alcohol, Cochabamba, voting. Bookmark the permalink.

6 Responses to Only vote while sober, please!