“Why We Lost” by Daniel Bolger

Maybe a book that promises “a general’s inside account of the Iraq and Afghanistan wars and how it all went wrong” had to disappoint, but I didn’t expect it to disappoint so much.

Lieutenant General Bolger sounds contrite in the introduction: “Our primary failing in the war involved generalship”, “we demonstrated poor strategic and operational leadership”, “This was our war to lose, and we did.” So I expected some sharp analysis with clear lessons and recommendations. Instead, I got plenty of detailed accounts of specific engagements with the enemy, a firefight here, a raid there, an ambush over there. Maybe there is something to be learnt from these action-novel type stories, but Bolger doesn’t draw any conclusions. He doesn’t connect them, there is no big-picture analysis. 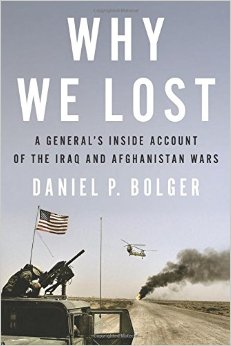 Whenever Bolger writes about the political, cultural and religious situation in the Middle East, you can sense his uncertainty about the situation by his referrals to “they”, “them”, “these people” as if everyone living in Iraq or Afghanistan are part of one monolithic group, or to Shia and Sunni as if this is the only important characteristic shaping someone’s views towards a foreign power or international forces. His understanding of the Middle East is very simplistic, and maybe this in a way does explain “why we lost,” although probably not the way the author had intended.

I already wanted to quit the book when I came across the term “fire-worshipping Zoroastrian Yezidi” (p. 158). Yezidi are distinct from Zoroastrians and neither of them are “fire-worshipping,” which if used without any explanation makes them appear like cavemen. It’s like calling Catholics a “candle-worshipping religion”.

I continued, hoping for the book to improve. But then it got to Abu Ghraib and the mistreatment of prisoners (p. 168-170). Bolger expresses understanding for the US soldiers who humiliated and abused Iraqi prisoners and attributes part of the blame to “captive Iraqis [who] proved anything but docile”. Granted, they probably weren’t, but I don’t see how this could justify mistreatment. Bolger realizes the negative effect of Abu Ghraib, but tries to pin it on a “a few dumb young MPs [who] inflicted a lot of damage to the U.S.”

I fired the book into a corner when I read “To counter all the hyperventilation about torture, some perspective is in order. The U.S. military did not torture anyone. None of the subjects of the Abu Ghraib photos were killed or injured,” and so on, apologetically and, particularly with hindsight, strangely out of touch with evidence.

General Bolger still displays the reflexes of protecting the people serving under him (maybe honorable while in service, although even this is doubtful in cases like Abu Ghraib, but definitely not helpful for an honest analysis) and of an Army guy who puts all blame for torture on the CIA. But if someone writes in 2014 that “the CIA apparently had some different rules, but even they very rarely apply any enhanced interrogation techniques, none that are life-threatening,” I must assume that the author didn’t follow the news very closely. Even before the release of the report on CIA torture by the Senate Intelligence Committee, many cases of torture, and yes, death and other long-lasting adverse physical effects, were reported.

So I stopped reading on page 169 of 436 pages, because what could you possibly learn from such an author? Not only a superfluous, but indeed a terrible book. Older, but much better: Imperial Life in the Emerald City by Rajiv Chandrasekaran.

Travelling the world and writing about it. I have degrees in law and philosophy, but I'd much rather be a writer, a spy or a hobo.
View all posts by Andreas Moser →
This entry was posted in Afghanistan, Books, History, Military, Politics, USA and tagged Iraq, war. Bookmark the permalink.

4 Responses to “Why We Lost” by Daniel Bolger