Necropolis – the City of the Dead

To escape this mishmash, I like to visit cemeteries, where time trails 50 or 100 years behind and each country still has its own traditions. In Bari I discovered a cemetery which was larger than some towns I had lived in before. A veritable city of the dead. And that is exactly what it said on the sign next to the splendid entrance: Necropoli. 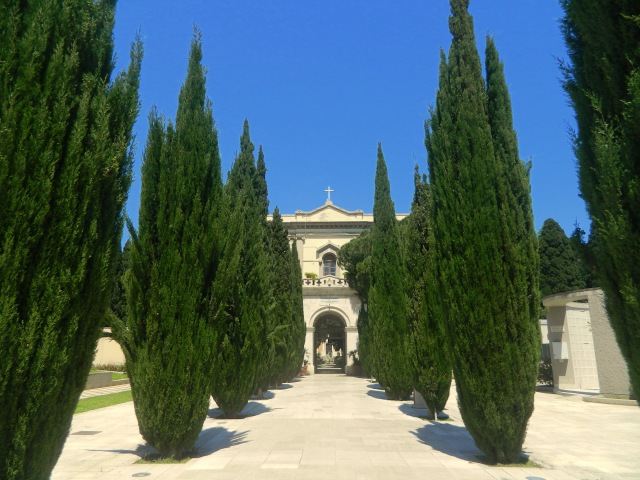 And the cemetery is indeed divided like a city. Tree-lined boulevards and roads crisscross the realm of the distant past.

In the center, there are pompous buildings and palaces, with graves that are nicer and larger than the apartments of some of our fellow citizens who are still alive. 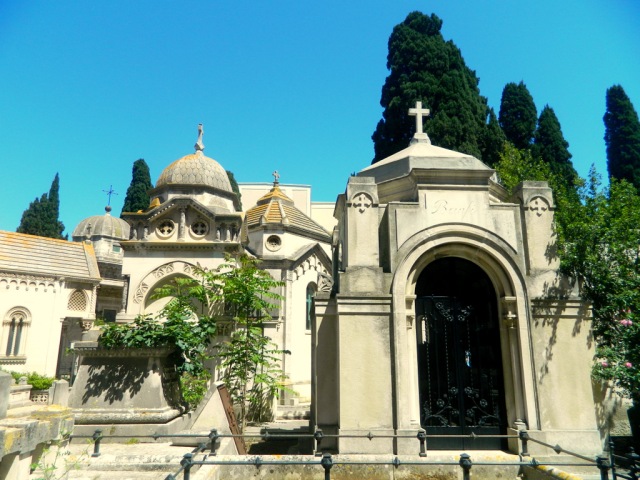 This is contrasted by the rows of prefabricated houses. Here, the dead are piled on each other in five rows, each of them in a stone tomb of exactly the same size. Probably a project suggested by the Socialist or Communist Party. 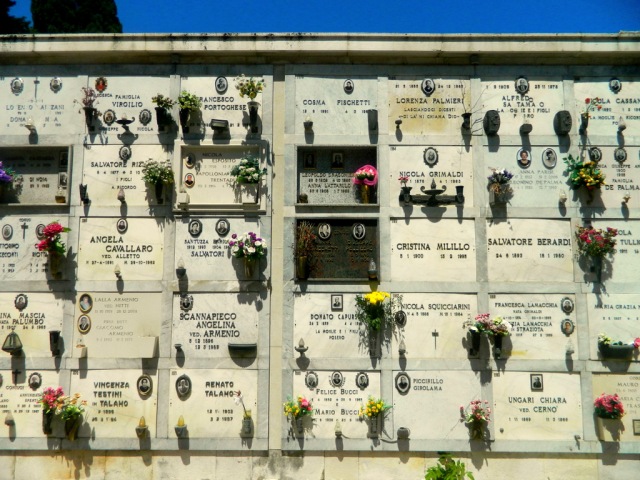 In these parts of town, you even have to share the stairs with the whole neighborhood.

Meanwhile space is becoming scarce, so that the city of the dead needs to accept multi-storey buildings as well. From the outside, these houses look like regular apartment blocks, but if you dare to glimpse through the window, you see the corpses piled up to four floors high.

Conveniently with chairs for visitors who are waiting for one of the apartments to be become ready to move in.

Even in the basement you won’t find bicycles or collections of comic books, but – you may guess it already – the ancestors who have left us.

There is clearly a trend towards the individual grave though, at least among those who can afford it. Please take note of the crane in the background as evidence of ongoing expansion.

The photos posted on the graves which you can see in this newly developing area are no new trend however. In Italy this was already done 100 years ago, although the old photos have more style and are more favorable towards the deceased. It shows that people used to hire a photographer instead of simply snapping a selfie with a mobile phone. 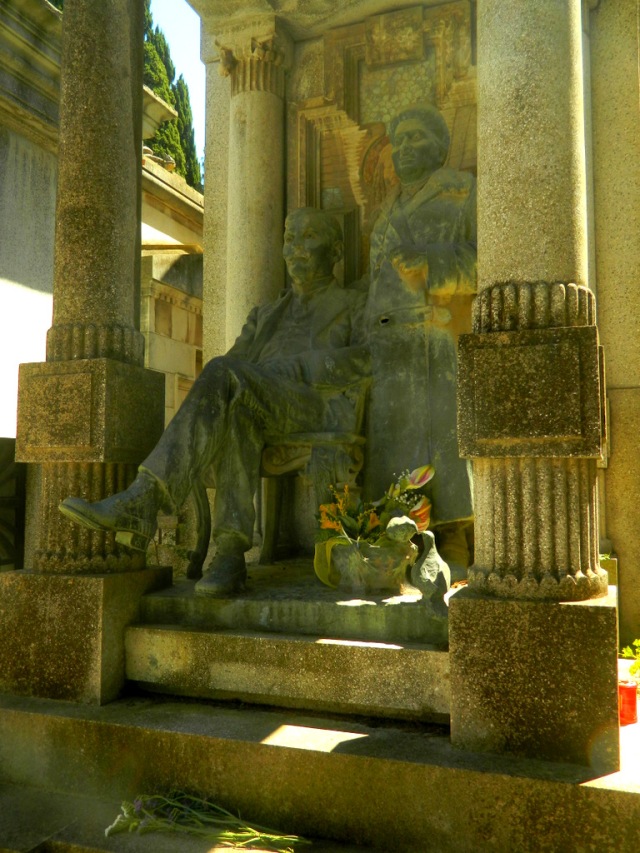 Like in any other city, there is the odd neighbor whose lapse of taste provides fodder for conversation and who makes it easy to describe to friends how to find your place. (“Turn right after the ugly pink glasshouse.”) 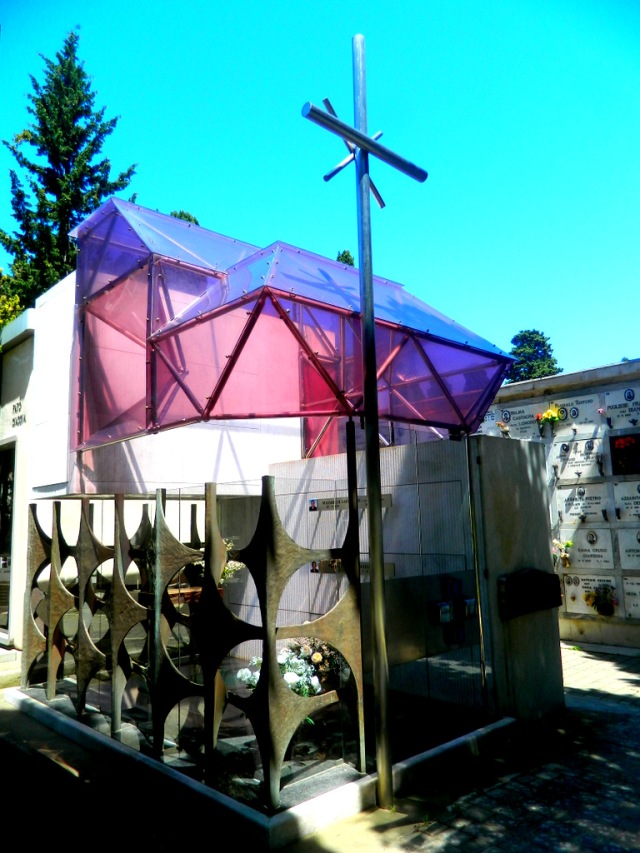 Speaking of finding your way: everything is most organized. Signs indicate in which section and in which sector you are and which apartment numbers you can find in the building in front of you. Cities with numbered streets like Manhattan and Mannheim probably got the idea from this cemetery in Bari.

And if you ever get lost, you simply ask for the police station, where you will gladly be helped (although everyone was dead when I stopped by). 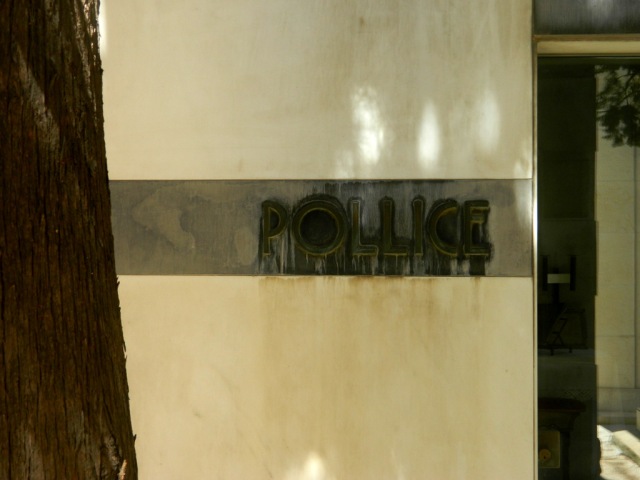 The old (not only) Italian tradition of forcing Jews to live in a ghetto is also applied after their demise.

Here the tombstones are significantly smaller, which must come as a disappointment to the Jews-control-all-the-financial-institutions-of-the-world conspiracy theorists.

And even a Pharaoh is buried in Bari.

Some of the more immobile inhabitants may deem the sign pointing to the exit as cynical, but to me it indicated the path back into the present after hours of promenading through this city which was, particularly for Italian circumstances, singularly calm and devoid of traffic.

The city of the dead seemed to have everything, until my stomach told me what was missing: a pizza place.

Travelling the world and writing about it. I have degrees in law and philosophy, but I'd much rather be a writer, a spy or a hobo.
View all posts by Andreas Moser →
This entry was posted in Apulia, Death, Italy, Photography, Travel and tagged Bari, cemetery. Bookmark the permalink.

16 Responses to Necropolis – the City of the Dead