There is probably no better time than now to read a novel about two NSA employees who have absconded to the Soviet Union and about the US government’s attempts to get them back. Yes, I wrote Soviet Union instead of Russia, because the book is from 1966. It is The Cold War Swap, the first spy novel by Ross Thomas who went on to write another 20 of them or so. 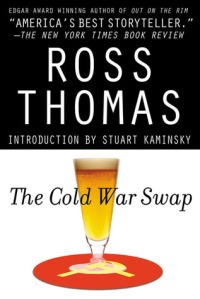 It’s a typical spy story at the height of the Cold War. The meetings between the different agents take place in Berlin of course, on both sides of the wall, connected through tunnels and Checkpoint Charlie. Bonn is still important, people still smoke on airplanes and people still wait for Der Spiegel to come out on Monday to learn about the latest developments in the German government.

The story follows the owner of a bar who is drawn into the mess caused by the US government, the Soviet government, West and East German spies, the Chinese and plenty of freelancers against his own will. Typical Eric Ambler stuff. It’s a fast-paced story with a few twists and turns, as you would expect from a spy thriller. But, unlike Eric Ambler, it is not more than a thriller. The language shows no deeper literary quality. Ross Thomas seems to have thought that it adds authenticity if he mentions what each spy drinks, how much of it they drink and what cigarettes they smoke whenever they get together. I find such details tiresome and superfluous. Still, the story moves quite fast across the 214 pages and it’s never a boring read. At the very end, it even becomes melancholic, but in a good way, which might help to leave a lasting impression.

One thing that put me off was the portrayal of the two NSA defectors. They defected because they were gay, as if being gay in the Soviet Union was such a wonderful thing in 1966. They are portrayed in a very stereotypical manner, crying and holding hands when in danger. That is annoying.

Another thing that put me off, but which most readers might be able to ignore, are the misspelled German words and place names. When I come across words like Bahnhoff or Shönefeld or hochaus, I wonder why neither the author nor anyone at the publishing company bothered to either consult a dictionary or simply ask a German speaker to read through the manuscript. I am available.

In the book, the US offer up one of their own spies in exchange for the Soviet Union to return the NSA defectors. The defectors don’t want to return, of course, so they need to be forced. The US spy who is supposed to be presented to the KGB doesn’t want to do that either, so he escapes, trying to snatch the NSA defectors himself and return them to West Germany to buy his freedom. Far-fetched, but then stuff as crazy as this did happen during the Cold War. Still, not an option for Edward Snowden, I assume. He would better go along with this plan.

Travelling the world and writing about it. I have degrees in law and philosophy, but I'd much rather be a writer, a spy or a hobo.
View all posts by Andreas Moser →
This entry was posted in Books, Cold War, Germany, Language and tagged espionage, literature, NSA. Bookmark the permalink.