Book Review: “Into the Wild” by Jon Krakauer 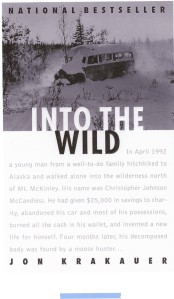 “Into the Wild” is the real story of Christopher McCandless, a young American who decided to roam the wilderness of the United States after graduating from university and who eventually died of starvation in Alaska, aged 24.

“Greetings from Fairbanks! This is the last you shall hear from me, Wayne. Arrived here 2 days ago. It was very difficult to catch rides in the Yukon Territory. But I finally got here. Please return all mail I receive to the sender. It might be a very long time before I return South. If this adventure proves fatal and you don’t ever hear from me again, I want you to know you’re a great man. I now walk into the wild.”

Such read the postcard that Chris had mailed to a friend on 27 April 1992. Four months later, he was dead. His dream had been to live in the wilderness of Alaska, without any contact with or support by the outside world. Chris stumbled across a derelict bus (pictured on the cover of the book, above) which he made his home. From there, he set out to collect food and hunt animals. Chris had neither taken a compass, nor a lot of other useful gear. If it hadn’t been for a helpful gentleman who had given Chris a lift on the last leg of his hitch-hiking journey to Alaska, Chris wouldn’t even have had proper boots. – One thing that he did have plenty of stock though, were books, among them works by Henry David Thoreau, Boris Pasternak and Leo Tolstoy. The entries in Chris’ diary also show the influence of Jack London. “I have had a happy life and thank the Lord. Goodbye and may God bless you all!” is the entry in the diary, dated 12 August 1992. Chris felt that his body was weakening, that he was losing weight fast, that his end was near. On or shortly after this day, he died. Three weeks later, his body was discovered by a group of hunters. Had Chris still been alive, this encounter would have saved his life.

To die three weeks before a potential rescue and after having walked off into the wilderness a bit unprepared might be considered as a sad or silly thing. And maybe Alaska is really too dangerous for these kind of follies, especially for a kid that grew up in a Virginia suburb.

But one shouldn’t judge a life by its end or its duration, but by its content. Chris may have had a short life, but he certainly had a fulfilled one: After graduating from university, at age 22, he gave away all his savings to charity and went on a road-trip around the United States. The car was lost to a flash flood, so he continued by walking, hitch-hiking and jumping freight trains. He crossed into Mexico by canoe and got lost in the canals there. He lived and worked on a farm in South Dakota for a while. He spent time in Arizona and California, sleeping in forests, on mountains, next to rivers and in the desert. But all the time he was dreaming of the big adventure in Alaska. 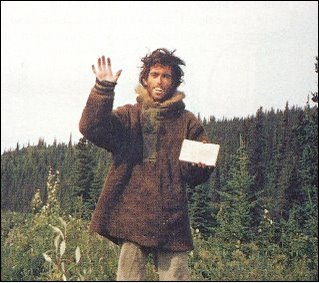 the last photo of Chris McCandless

The strongest parts of the book by Jon Krakauer are actually not the last months in Alaska (which had to be recreated based on Chris’ diary and the evidence found at the site of his death), but the memories of people whom Chris had met on his travels, with whom he had caught rides, worked and stayed. I was especially moved by the generosity of strangers and by Chris’ friendship with an old man, whom he managed to convince to (also) give up the monotonous life and take up adventure. These two years of travelling sound like a heck of a time! No obligations, no limitations, no expectations (at least not somebody else’s). Just exploring the world, life and yourself. That’s a life! – In contrast to that, what most of us do is just “passing time”.

One annoying thing about the book: Jon Krakauer could not refuse to compare his own youth with that of Chris McCandless and insisted on writing about himself. Conveniently though, this is confined to two chapters of their own, which I could thus easily skip.

Reading the story of Chris McCandless conjured up romantic feelings in me. I was reminded of many of my own adventures, from the Australian Outback to a hike along the Southern coast of France, from sleeping outside the city walls of Jerusalem because I had arrived in the city too late to find any open hotel to crossing the mountains from Lebanon to Syria in a snowstorm. But even more so, I realised how much I miss these adventures. – And I have vowed to take them up again! Living in England, I have decided to start by walking across the country, from coast to coast, this summer without sleeping in any man-made shelter.

Travelling the world and writing about it. I have degrees in law and philosophy, but I'd much rather be a writer, a spy or a hobo.
View all posts by Andreas Moser →
This entry was posted in Books, Life, Philosophy, Travel, USA and tagged adventure, Alaska, Chris McCandless, Christopher McCandless, freedom, hiking, Jon Krakauer. Bookmark the permalink.

25 Responses to Book Review: “Into the Wild” by Jon Krakauer