There is really no reason to visit Uman. It is a small city like hundreds of others in Ukraine. But because it lies halfway between Kyiv and Odessa, I decided to break the journey and to spend a day and a night there.

The way to the hotel leads across muddy roads, past yawning potholes and yapping dogs. The hotel has five levels and stands out from the neighborhood of one-family or half-family houses. Either a bad investment or big-time money laundering. 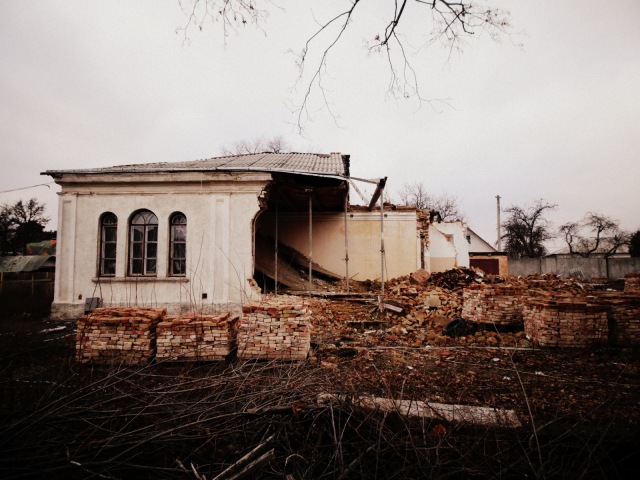 “105 hryvnas tourism tax per day,” the boy at the reception adds about 4 € to the invoice, inflating it by more than 40%. The walk from the bus station to the hotel was long, but I didn’t spot anything that would warrant a tourism tax.

Actually, Uman is known for the opposite of tourism: The Koliyivshchyna rebellion. The massacre of Jews and Poles in 1768. The deceitful overpowering of the Haidamaks by the Don Cossacks. The encirclement battle of Uman in 1941, in which the Wehrmacht and its Hungarian and Romanian helpers crushed 20 Soviet divisions. The Holocaust. The Uman–Botoşani Offensive, in which the Red Army retook Uman in 1944. NKVD camp no. 33.

As depressing as this makes the town sound, it looks just like that. 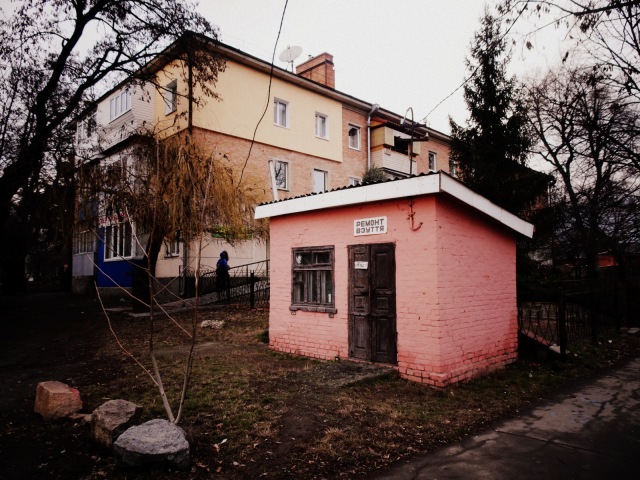 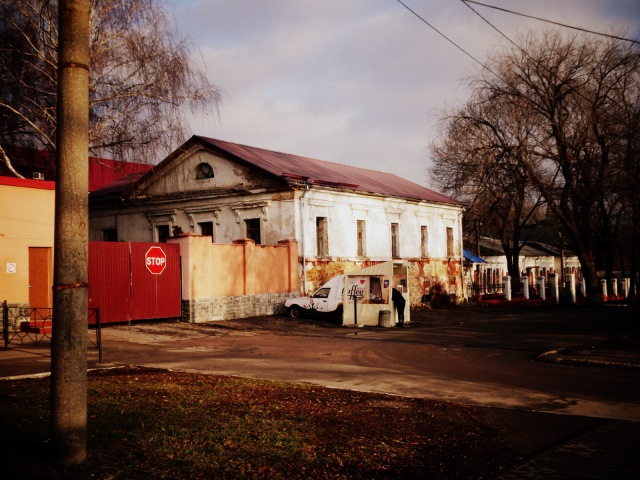 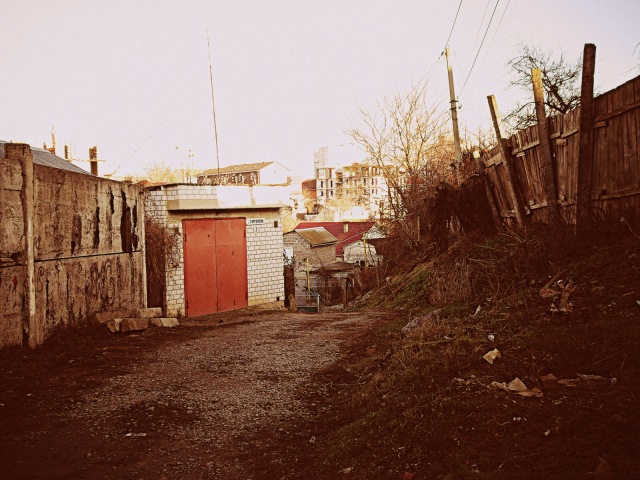 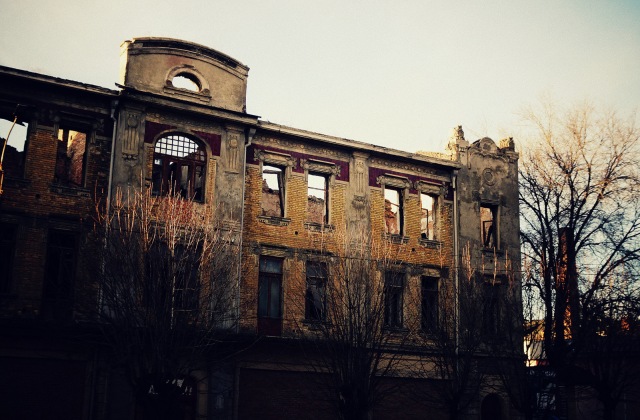 The pedestrian lights weakly and faintly playing Beethoven’s “For Elise” when they switch to green just makes everything more sad.

In the main street, the cars are waiting for an abandoned dog to walk across the zebra stripes. And it wanted to get run over to be relieved from its misery.

On the grey square in front of the grey city hall, someone adorned the ball on the column with a smiley. It keeps smiling a grey and senseless smile.

Because pogroms and tank battles aren’t enough, there is also a Chernobyl monument. If only the people here knew that even Pripyat was more beautiful than Uman – and still might be.

At the hotel front desk, there are business cards promising “Massages for Men”, but next to the phone number, they show the name Pavel. I really don’t feel like making his acquaintance. The clock in room no. 502 stands still at 14:37, where it has probably stood for years.

I am going to the supermarket to buy high-proof beer and high-sugar pastries, to drink and eat myself to sleep early in the afternoon. Without that, I wouldn’t know how to escape thoughts of suicide in such a gloomy place.

The supermarket has a small tobacco shop, more of a tobacco corner. I had already quit smoking because I couldn’t find my favorite cigars in Ukraine and because I am slowly running out of money after traveling for a month. But I want to give it one last try, which shows my desperation: “Do you have Toscano Classico cigars, by any chance?”

“Yes, of course,” the elderly lady responds, clears out the humidor and takes the last box of the world’s best cigars from the very bottom. In a small town in the Ukrainian steppe!  Such trifle things can make me quite exuberant. In that mood, I inform the tobacco seller that she has just saved my life.

“Why don’t you go to the Park of the Third Communist International, that’s a nice place to smoke,” she sends me on a way that will lead past further traces of the Soviet past.

But is it really the past? In the West, we often believe that everyone in the East rejected Communism or the Soviet Union, maybe because it was mainly those in opposition who sought refuge in the West. But the Order of Lenin at the memorial for General Chernyakhovsky is crisply polished, and thankful wreaths of flowers have been laid this morning.

The Shigulis, Novas and Nivas are also still working perfectly fine. Only the old ambulance is chugging across the bumpy road disconcertingly, as if it needed help itself.

And then I’ve reached the park.

It is as oversized as the ideas of the Communist International once were. To avoid getting lost in the Marxist-Leninist labyrinth, I try to memorize the five-year plan. 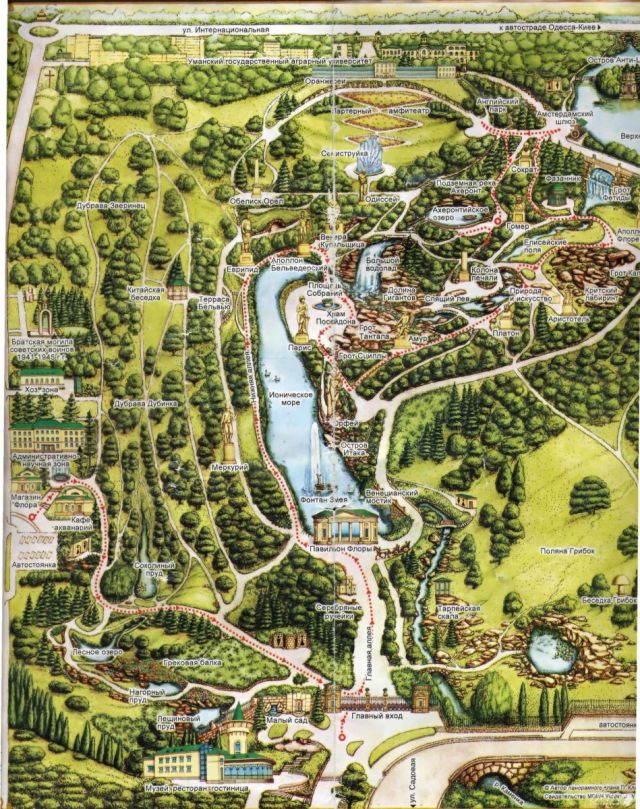 Oh, how the theoreticians have given vent to their ideas here! But they have overlooked the practical details. Even worse than the lack of capitalist Coca Cola vending machines is the fact that this map is only shown at the entrance. Hence, one will inevitably get lost in the thicket later on, unable to tell the right from the wrong path. The group of hikers who was once united will split into different factions, who will soon fight each other as obscure groups like the United Left Opposition and the Left Opposition in the Communist Party. 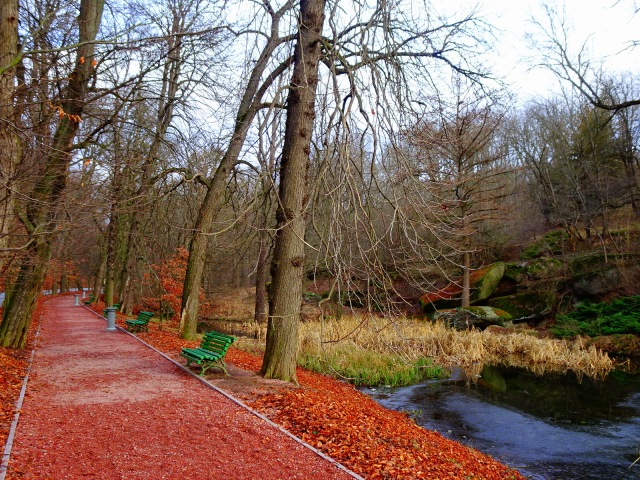 Quite in line with the revolutionary goal of the Comintern, nature as it used to be was completely turned on its head. Here, White Sea Canals were dug where nobody needed them, and monumental buildings were erected simply because of the abundance of labor. A purpose could always be found later, and if not, one would simply hold the next World Congress of the International here. 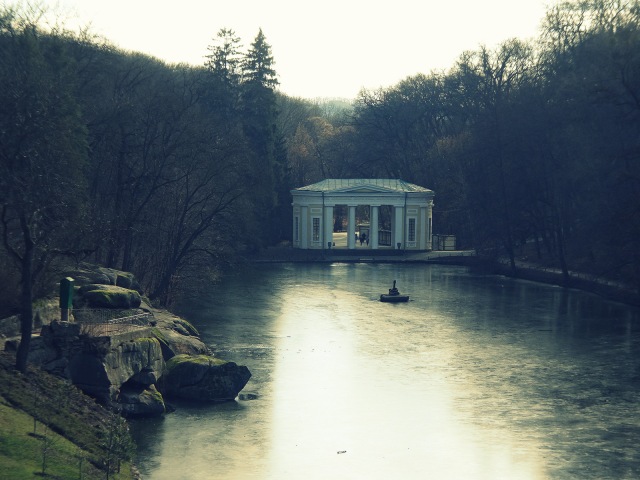 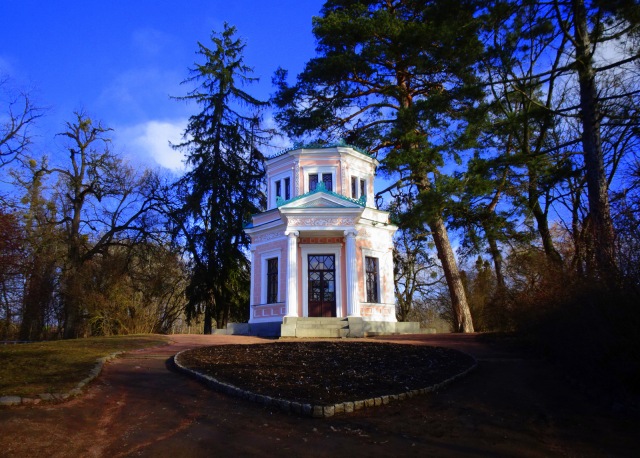 Lenin missed Switzerland, and thus the mountains were removed elsewhere (which explains why Ukraine is a predominantly flat country now) and deposited here.

Trotsky, who always dreamt of exile in the Caribbean, wanted an island. Thus, an island was built. An island hardly makes much sense without water, so a lake was built.

The figure 223 in the flower bed probably refers to the number of parties participating in the Communist International, coming from all over the world. (Back then, there were many more countries than today, because the Capitalists had used World War I to divide the workers of the world and to let them fight and die for old and newly created national states. This was actually the reason for the failure of the Second International.) When you see people in camouflage uniforms in the park now, you needn’t worry, though. It’s not another invasion from Russia, the park guards just like to dress for the final battle of the proletariat. 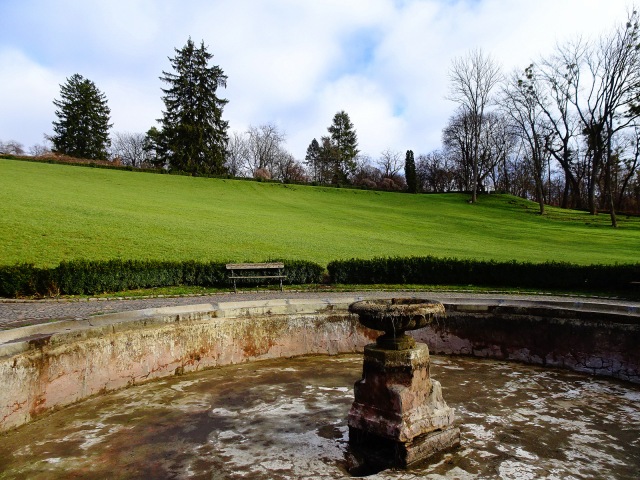 The water fountains are switched off in winter, but the metaphors keep spraying like fireworks at the anniversary of the revolution. If part of the park is closed for repairs, that is absolutely within the intention of Trotsky’s theory of permanent revolution. An amphitheater, in which the hedge-rowed paths are winding their way up is a symbol for the different stages of development that society needs to undergo on the path to Communism.

Because that thing with the Communist International is not attracting many visitors anymore (you are barely staying awake yourselves, if you are honest), the Uman city council had the idea, no doubt inspired by Hollywood, to give the park a different name and a different story. Allegedly, a Polish count had given the park as a present to his wife Sophia, who was supposedly as beautiful as the park was to become. That’s why the park is now called Sophia Park or Sofiyivka Park in Ukrainian.

What a ridiculous and pitifully unfeminist story. If the women of the Communist International had wanted a park, they would have built it themselves and collectively. They needed no bourgeois bloke for that. But they didn’t want a park. They wanted to become patriotic partisans shooting down Prussian panzers and Teutonic tanks, or become aviators acing their airships through avalanches of antagonistic anti-aircraft artillery, but definitely something with arms and alliterations.

But Kitsch is more attractive than Communism, tackiness more than history. The Sophia story has conquered all guidebooks and most travel blogs. It seems I am the only one left still fighting for the truth.

To deceive the visitors, the monuments of Marx and Engels, of Lenin and Stalin are covered by green tin containers throughout the park. Alas, they are only locked away, not destroyed, because nobody knows which times will be next. 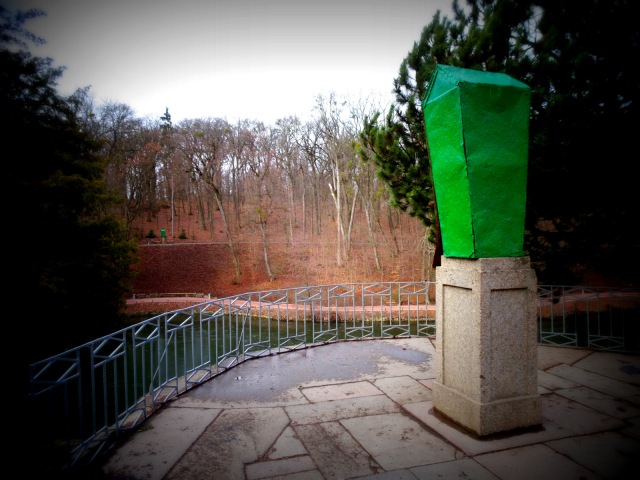 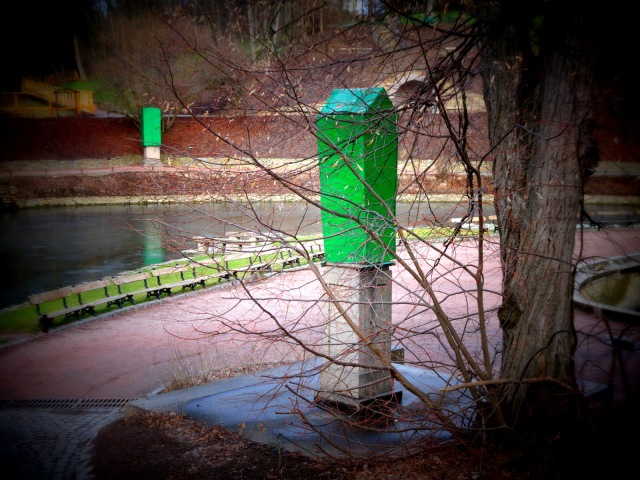 Only the politically innocent statue of Perun is brave enough to show itself. 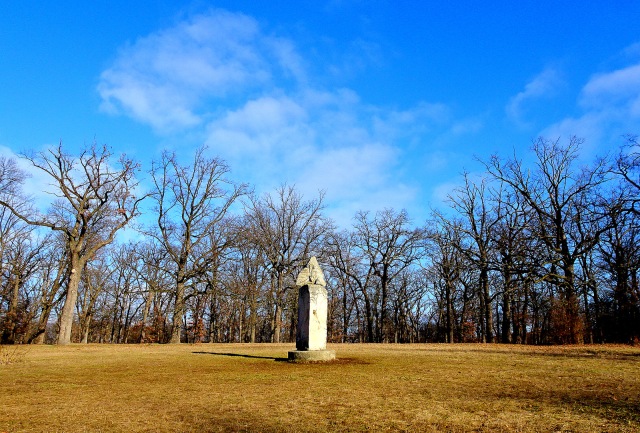 By the way, try to imagine this park in spring or in autumn and not on a cold January day, it should be very beautiful. This doesn’t save Uman as a city, but you can easily spend half a day here. And, in case you are looking for it, the cigar shop is at the Furshet supermarket in Velyka Fontanna Street 31a.

This was the best place to enjoy the cigar, the sun and a book, so hidden away that I could be certain not to be picked up by one of Stalin’s purges: 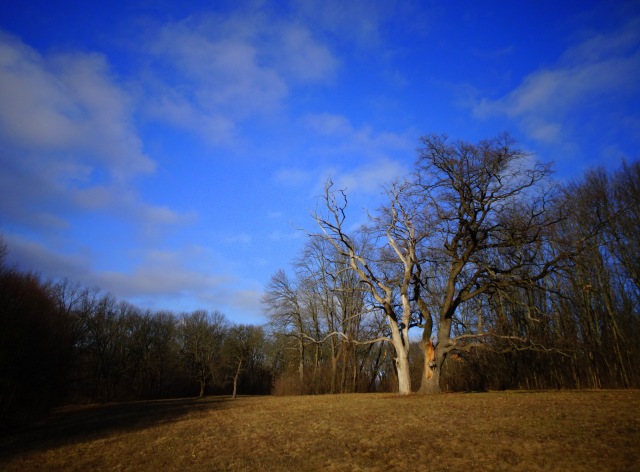 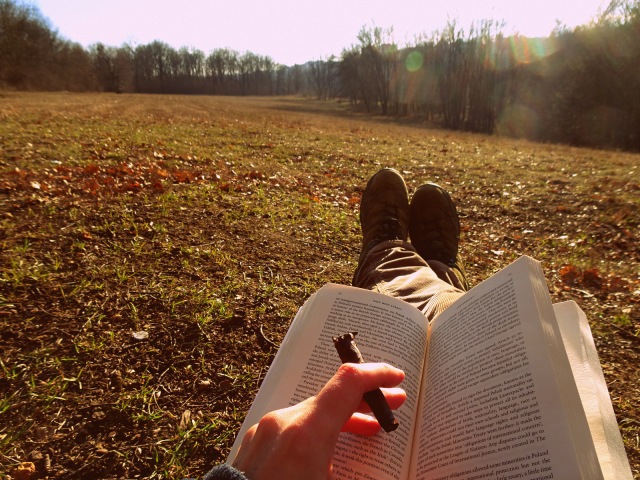 Travelling the world and writing about it. I have degrees in law and philosophy, but I'd much rather be a writer, a spy or a hobo.
View all posts by Andreas Moser →
This entry was posted in History, Photography, Travel, Ukraine and tagged cigars, Soviet Union, Uman. Bookmark the permalink.