When I lived in Romania, some people said about the long-term dictator, who was overthrown in 1989: “You know, in the beginning, Ceaușescu was not even that bad. After he came to power in 1965, he distanced Romania from the Soviet Union. And many things relaxed. Not dramatically, but it was a thaw of sorts.”

Internationally too, Nicolae Ceaușescu took Romania on a different course than most Eastern European countries, maybe comparable to Yugoslavia under Tito. Still a Warsaw Pact country, Romania did not participate in the crushing of the Prague Spring in 1968, and Ceaușescu openly condemned the intervention. He maintained political and economic relations with the West, receiving for example Charles de Gaulle and Richard Nixon in Romania.

“Why?”, I ask, not being able to remember anything dramatic in world history from that year.

“Ceaușescu got invited to North Korea. And there he saw the personality cult for Kim Il-Sung, the total control of all aspects of society, the combination of nationalist and communist ideology, the idea of self-sufficiency of a country. When he came back, he wanted to turn Romania into a European version of North Korea.”

I am always skeptical of simple or monocausal explanations for historical developments. But when you watch a video of the reception in North Korea, you have to admit, one can see how that could go to Mr Ceaușescu’s head.

And indeed, just a few weeks after the visit to North Korea, Ceaușescu published the so-called July Theses, rolling back previously granted freedoms for the press, for writers and other intellectuals, for universities. The thaw had ended abruptly.

If you have friends who are planning to travel to North Korea, better be careful! You don’t know how it will mess them up. (You should also be suspicious if your own president seems to be rather keen on getting invited to North Korea.)

While the effect of the state visit by Ceaușescu in 1971 on Romania has been widely known or claimed, the effect on North Korea has been overlooked. Trying to impress the Romanian leader, the North Korean state spent almost one year preparing for the festivities. The expense in money and human resources (all the people in the parade could not work in the fields or in factories while rehearsing for the performance) was a huge drain on the North Korean economy, from which the country never recovered.

Nowadays, people don’t remember, but until 1971, North Korea was economically on par with South Korea. 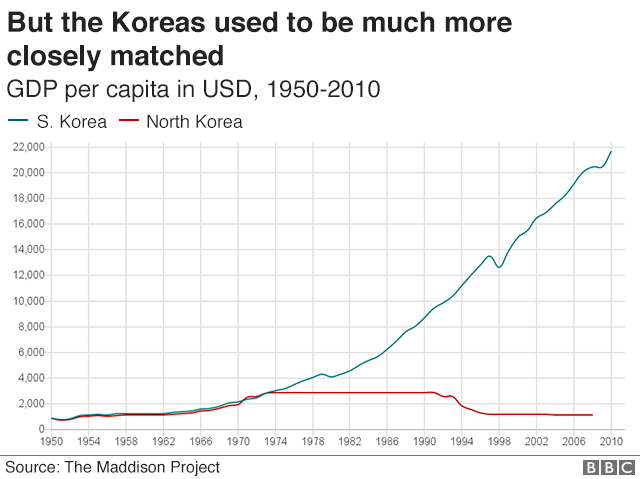 For about 20 years after the momentous visit, you notice that the North Korean reported GDP is a flat line. Obviously that doesn’t reflect reality. It went downhill the year after everything was blown on costumes and balloons, but nobody wanted to admit it, so the North Korean chief economist simply kept using the numbers from the previous year. So, Ceaușescu not only ruined one country, but two. Good that he was executed.

But at least we got a catchy tune from the summit.

Travelling the world and writing about it. I have degrees in law and philosophy, but I'd much rather be a writer, a spy or a hobo.
View all posts by Andreas Moser →
This entry was posted in Cold War, Economics, History, Music, North Korea, Politics, Romania, Travel. Bookmark the permalink.

14 Responses to Ceaușescu in North Korea