1989, those were the times! With each broadcast of the evening news, the world changed so quickly that most people already lost track back then. Now, 25 years later, only a vague recollection of falling walls, fired shots and popping champagne bottles remains.

As a special service for the forgetful ones and those cursed by the disadvantage of being born too late, I herewith summarize the essential revolutionary events of the year 1989 and subject them to a historical evaluation.

Citizens take to the streets, demanding “The Wall must come down”. Nothing happens until someone has the idea of filing an application for the opening of the wall. East Germany’s Politbüro puts this request on the agenda, has a thorough debate and overwhelmingly votes for opening the Berlin Wall. The decision is proclaimed, the Wall is open. Reunification.

Verdict: Typical German way. Even their revolutions are petit-bourgeois, boring and bureaucratic. No surprise that Hollywood didn’t turn this one into a movie.

Dock workers with big mustaches sit down at a Round Table because that makes it easier for them to see who has how much beer left. The Polish government in exile located in the Vatican jets around the world to ask for solidarity (in Polish: “Solidarność”) for the city of Gdansk which has been libeled by the books of Günter Grass. Mr Gorbachev has no time to get involved. Revolution successful.

Verdict: No scientifically accepted proof for the existence of God despite attempts to the contrary by the Catholic Church. 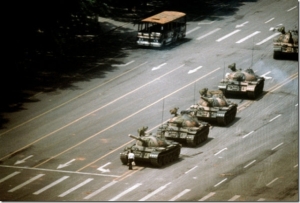 A simple argument about the right of way between a man with heavy shopping bags and a tank column came close to escalation. There are hardly any photos because there weren’t any mobile phones in China at that time.

Verdict: Completely forgotten even in China itself. No celebrations for the 25th anniversary this year.

With flowers in their hair and singing folk songs, people form a human chain from Vilnius to Tallinn.

During a goulash picnic close to the border, playing children accidentally cut through the border fence. The Iron Curtain is open.

Verdict: A successful revolution can still be lost 25 years later.

The oppressed and starved people are protesting against the Ceaușescu dictatorship despite the bitter cold. Tanks appear. Shots are fired. Blood in the snow, despair, death, heroic bravery. After two weeks of civil war, the revolutionaries storm the presidential palace. The dictator and his wife can barely escape by helicopter but have to make an emergency landing and continue by hitchhiking. The driver (make of car: Dacia) takes them to his home and locks the feared couple into his garden shed. The militia picks them up and executes Nicolae Ceaușescu and his wife. Freedom!

Verdict: This is how revolutions should happen! And the whole thing occurred over Christmas, when you otherwise would be forced to engage in banal conversations with relatives. Perfect timing. Christmas has never been as thrilling as in 1989.

Travelling the world and writing about it. I have degrees in law and philosophy, but I'd much rather be a writer, a spy or a hobo.
View all posts by Andreas Moser →
This entry was posted in China, Cold War, Estonia, Europe, Germany, History, Human Rights, Hungary, Latvia, Lithuania, Poland, Politics, Romania. Bookmark the permalink.

8 Responses to The Revolutions of 1989