On the occasion of the attempts by some people in Catalonia to become independent, The Guardian published this map under the headline Beyond Catalonia: pro-independence movements in Europe. 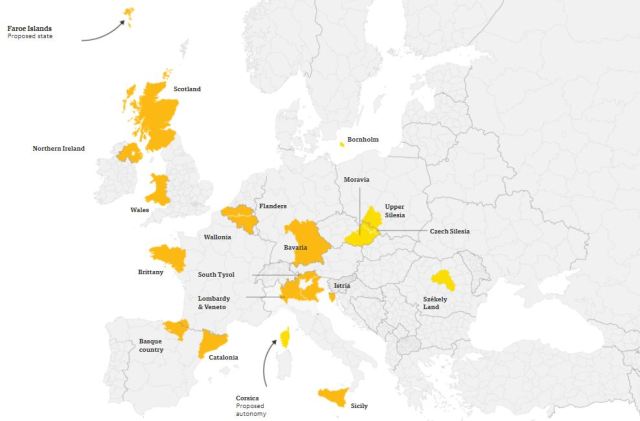 This map makes it look as if all of Europe is about to fall apart.

Now, I have been to many of these orange/yellow regions and lived in some of them, and I don’t remember any huge independence movements, but I will leave it to those of you who have lived there for longer to comment on the specific regions.

I will just pick Bavaria as an example because it’s the largest colored region after Scotland, because I have lived there for decades and because I know its political situation quite well: There is no serious independence movement in Bavaria. Putting Bavaria in the same league as Catalonia or Scotland, which had referendums on independence, or South Tyrol or the Basque Country with a history of separatist terrorism is just bullshit, as we would say in Bavaria.

Of course you can always find a few people everywhere who will say, after too many beers, “we want the king back” and dream of independence. But that’s like people dreaming of leaving their spouse and their children to travel around the world. It’s not a “movement”, nor anything serious.

There is actually one political party in Bavaria that wants more autonomy and lists a referendum on independence as a long-term goal: the Bayernpartei. (They do however want a democratically elected president, not a return to the monarchy, setting them at odds with the old drunkards at the Stammtisch.) After the foundation of the Federal Republic of Germany, they were actually mildly influential, with 17 members in the first federal parliament (1949-53) and in governing coalitions in the state of Bavaria from 1954-57 and 1962-66.

But since 1966, this party of Bavarian autonomy/separatism/independence has not won any seats for the Bavarian state parliament, let alone the federal parliament, the Bundestag. Their best result since 1966 was actually in the last election in Bavaria in 2013, when the Bayernpartei scored 2.1% of the votes – but no seats – in the state which they want to lead to independence. That’s hardly a significant independence movement. The SNP would laugh about this.

Oddly though, the map leaves out the Donbass region in Ukraine, the Kurdish region in Turkey, Transnistria, Abkhazia and Užupis in Vilnius. Or maybe the Guardian doesn’t consider any of these regions to be part of Europe.

Travelling the world and writing about it. I have degrees in law and philosophy, but I'd much rather be a writer, a spy or a hobo.
View all posts by Andreas Moser →
This entry was posted in Elections, Europe, Germany, Maps, Media, Politics and tagged Bavaria. Bookmark the permalink.