This film review doesn’t require a spoiler warning because the latest James Bond film SPECTRE doesn’t have a discernible plot anyway. It is more of an unorganized sequence of badly written and halfheartedly acted scenes. Like a car-boot sale trying to get rid of everything that was left on the cutting-room floor of the previous James Bond films.

It begins in Mexico, with the scene heralded as “the best action scene ever” in so many reviews that I became suspicious that many film critics were bribed just as Mexico City paid millions to bribe the producers into including that scene in the movie. Because the film’s opening is not fulminate, but bad. The Dia de los Muertos, the Latin-American Halloween, would be a thankful background, but the film doesn’t make use of it. The Mexicans are mere extras, they remain in the background, James Bond doesn’t interact with any of them. None of them come alive as a person. They are an amorphous mass without individuals. It feels as if the movie doesn’t really know what to do with them.

You can tell that Mexico City didn’t only buy the scene, but also the actress Stephanie Sigman, between whom and Daniel Craig no spark was ignited despite all the explosions around them. The action scenes are even worse. The collapsing buildings and the views from the helicopter are so obviously computer-animated that one is almost ashamed. If action sequences in 2015 look worse than they did in 1975, then maybe one should use the old technology again (tip: stuntmen instead of CGI boys).

The theme song Writing’s on the Wall by Sam Smith puts you asleep. The opening credits include photos of the protagonists from the last three films and confirm my fear: another retrospect and flashback Bond, instead of a stand-alone film. And a completely idiotic family story in which Bond and the villain Blofeld had a shared childhood. Weird that none of the earlier Bonds or Blofelds ever remembered that, let alone that it was never mentioned in Ian Fleming’s books.

Monica Bellucci as the widow of the guy just killed by Bond is not being seduced, but almost sexually assaulted. We already had this in Skyfall, where the former child prostitute suffers the same fate. The discussion about the borderline between consensual sex and rape seems to have bypassed James Bond, the scriptwriters, directors and producers. The facial expression of Monica Bellucci clearly shows what she was thinking: “What is the point of this bullshit? I should have gotten such a role 20 years ago.”

“When will this movie be over? Can somebody shoot me please?”

I am well aware that James Bond films never stood out for their logical plots. We have gotten used to Bond surviving plane crashes, never being hit once by the bullets of machine guns fired at him and that the villain always reveals his plans before the end of the film. All of that, we don’t mind. But what SPECTRE tries to serve is an insult to viewers. There is not even the pretense of the thinnest thread of a plot.

Bond is being suspended for the third time, but not only does he keep his job, he can also steal a car from the MI6 basement without being uncovered and receives the support of Q, who can leave his workplace for Austria for a few days without being missed by anyone. All of that despite total surveillance, the theme of the film.

Bond then drives this car from London straight to Rome, where there is no traffic chaos at all, so that Bond and a pursuer can enjoy an allegedly fast and furious car chase. That the only car stopping him is a Fiat 500 with an old Italian who is listening to and singing along opera shows to what kitschy lows this film sinks.

When Bond finds the secret meeting of the secret organization SPECTRE, which is being held – very secretly – in a huge palace in Rome with dozens of luxury cars parked in front, he is already being expected by Oberhauser. It’s only strange that Oberhauser/Blofeld, who otherwise thinks of everything and plans ahead, simply leaves Bond’s car in the parking lot, allowing Bond to escape.

Mr White wants to hide from SPECTRE, but installs a webcam in his living room which transmits everything to SPECTRE HQ. At the hotel in Tanger (I believe it is the one from the Jason Bourne films, which are comparatively becoming better), he has a secret room full with switched-on computers, which he apparently immures after each visit and which the hotel doesn’t notice.

Why does the fat guy working for Blofeld try to kill James Bond on the train, if Blofeld is already expecting him? And in Morocco, you can apparently demolish a whole train, but they will still allow you to disembark at the station “Secret Headquarters of the Evil Mastermind in the Desert”.

There is not much talking in the film, maybe because that would highlight the lack of any story. The rare dialogues are so flat (“Why did you come here, James?” – “I came to kill you.” – “And I thought you came to die.” is probably supposed to be a cheap Goldfinger remake) and are being declaimed like at a high school drama group performance. Particularly with Daniel Craig and Christoph Waltz, I got the impression they were playing under protest. Christoph Waltz has more esprit in any of his talk-show appearances. Even his printed interviews read more thrilling than this film.

The allegedly genial criminal mastermind doesn’t remove Bond’s explosive watch, which Bond can detonate in such a miraculous way that it opens up all his hand-, food- and head-cuffs, leaves himself unharmed, but causes Blofeld to have the famous injury to his face, despite which Blofeld will be active again after a few hours. Bond himself doesn’t suffer for a second from the drill that had been rammed into his head in order to destroy his brain. (The scriptwriters on the other hand seem to have successfully tried out this method themselves.) 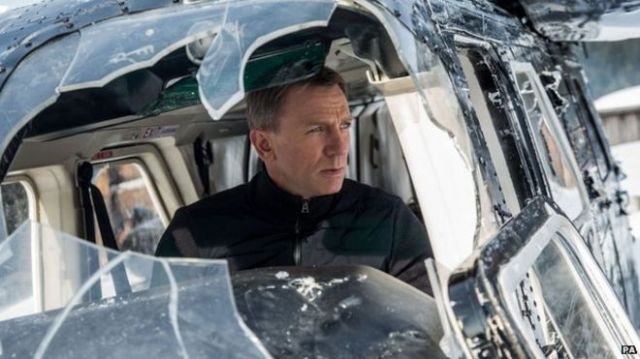 This plane doesn’t fly anymore. Nor does the film.

Bond escapes, Blofeld again lures him into a trap, of course again in London, as in the previous films. Again the girl is tied down somewhere and Bond has to rescue her before the 3-minute bomb, known from Goldeneye, will detonate. Luckily, the boat from The World is not Enough is still in the garage of the completely burned out MI6 headquarters, fully functional, with the key in the ignition and a full tank, and Bond can cause a helicopter to crash with one shot from a pistol. A crash which Blofeld naturally survives once again.

And so on, and so on. Nothing but moronic nonsense and dumb copies of the last films. Some of the scenes are even copied one to one, but unfortunately the most illogical ones. Like in the opening scene of Casino Royale, the desk-jockey doesn’t notice that the bullets were taken from his pistol and pulls the trigger. Anyone who has ever held a pistol with and without a full clip in their hand will immediately notice the difference in weight. Nobody is that stupid. But unfortunately, somebody is stupid enough to recycle the same stupid scene.

As a James Bond fan, I don’t find it easy to pass such hard judgment, but I really can’t remember anything positive about the whole film. Save your money, this film doesn’t deserve a single dollar and the scriptwriters deserve our particular scorn.

Travelling the world and writing about it. I have degrees in law and philosophy, but I'd much rather be a writer, a spy or a hobo.
View all posts by Andreas Moser →
This entry was posted in Cinema, Mexico and tagged Cinema, espionage, James Bond, movies. Bookmark the permalink.