How does Bolivia deal with illegal immigrants?

When I arrived in Bolivia, there were so many people at the airport in Cochabamba that the immigration police asked “Who is local?” and anyone in the hall who raised their hands and passports could just walk through. I should have joined the crowd, but at that time I wasn’t yet confident enough that I would pass for a Bolivian.

So I got a one-month tourist visa at the airport, free of charge. This I could extend twice for another month by going to the Immigration Office. When I told my Bolivian friends where I would go, they all advised to take a few books, a bottle of water and the day off because I would need to wait for hours. In reality, you go directly to the friendly guy at counter no. 6 and before you can even sit down and start to explain your request to stay for another month, he has already taken your passport, stamped it with the extension and handed it back to you. “How much does this cost?” I asked. “Nothing. Enjoy your time in Bolivia!” 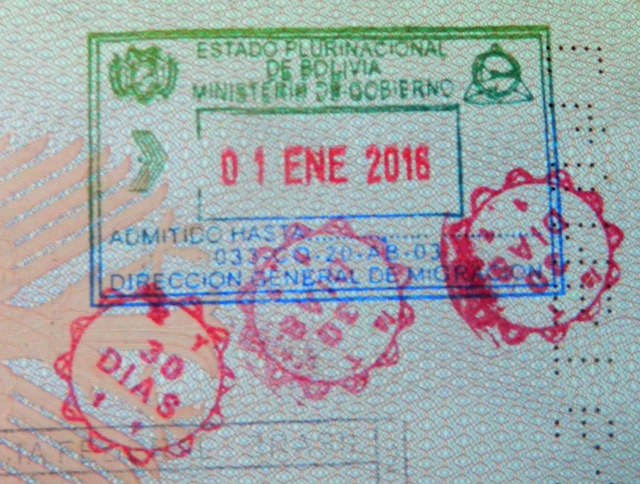 Three months per year are the maximum allowed on a tourist visa. When I wanted to stay in Bolivia longer, I was overwhelmed with offers of work contracts, volunteering contracts and marriage proposals, all of which could have served as the basis for a residence permit. It was also most surprising how many people could claim that “the head of the Immigration Office is my friend” or how many people had “a sister-in-law at the very top of the Immigration Department”.

But I didn’t want to do anything shady. Also, I was already aroused by the prospect of getting arrested to take a look at the famous Bolivian prison system. That didn’t work. One time I got into a police checkpoint after my visa had expired, already hoping that I would be driven away in a van with metal-grilled windows. The officer checked my passport carefully, looked at me, looked sorrowfully at the visa, looked back at me and handed my passport back, saying “I am glad you are enjoying Bolivia, Señor”.

So I stayed four more months, illegally. From now on, whenever you are ranting about “illegal immigrants”, please remember that it’s people like me that you are talking about.

Bolivia is not only friendly to visitors, but also quite smart. Instead of locking up immigrants, building walls or deporting people, all of which would cost a lot of money, they impose a fine.

So I worked hard for a few months until I had saved thousands of bolivianos, with which I went to the Immigration Office in La Paz to pay the fine. The officer there was very kind, said that they had already closed for the day but that I should come in and sit down, told me that I needn’t apologize at all for overstaying and proceeded to calculate the exact amount of the fine. Until then I had heard different numbers everywhere, ranging from 20 to 26 bolivianos per day.

The officer took the time and the help of several of his colleagues to explain in detail how the fine was calculated, and for the benefit of other travelers, I can reveal that the amount is 12 UFV per day. An UFV is an unidad de fomento de la vivienda, which is an accounting unit introduced to make payable amounts independent of inflation. It is calculated by dividing the Consumer Price Index of the present month by the Consumer Price Index of the same month of last year, taking the 12th root of that result, then calculating the nth root whereby n is the number of days of the present month and lastly multiplying this result by the value of the UFV of the previous day.

I did not understand it.

The officer had a computer and a calculator, but he was using a pencil and lots of paper to do his calculations. After about 10 minutes, he pronounced that I would have to pay a little more than 3,000 bolivianos. Which was good, because that’s exactly what I had saved.

When I wanted to pay however, he said “No, no, you can pay later. At the border.” I had the feeling that he was hoping almost as much as me that the border guards would forget about it and that I could leave Bolivia without such an enormous financial contribution.

But the Bolivian border guards at Kasani, on the border with Peru, were diligent public servants, although not without humor. “Why didn’t you just find a Bolivian woman and get married if you wanted to stay that long?” they asked before engaging in the same lengthy and complicated calculation of UFVs and bolivianos. The officer was using his phone to WhatsApp with his wife, but for the Fields-worthy calculation he too used pencil and paper.

He called his colleagues to show them the foreign guy who had overstayed not by a few days, but by four months. They were very curious and informed me that unfortunately I would only get the silver medal with my fine of 3,082 bolivianos because one time someone had come through that border post who had to pay more than 4,000. I was disappointed.

By the way, all of this is done completely above board. The payment is not a bribe. You get a receipt, a lot of handshakes, good wishes for your travels and the useful information that you can come back to Bolivia next year without any problems. 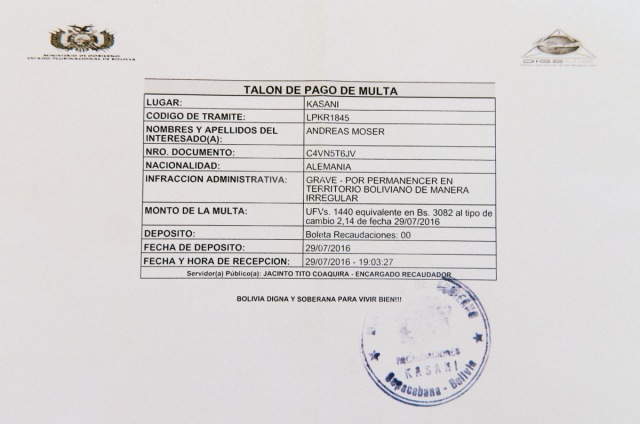 As you can see from the receipt, I committed the “grave violation” of “staying in Bolivian territory in an irregular way”. The fine was 25.68 bolivianos per day. That’s 3.34 euros (3.70 US dollars) or exactly 100 euros per month.

Travelling the world and writing about it. I have degrees in law and philosophy, but I'd much rather be a writer, a spy or a hobo.
View all posts by Andreas Moser →
This entry was posted in Bolivia, Immigration Law, Law, Travel. Bookmark the permalink.

21 Responses to How does Bolivia deal with illegal immigrants?