After Donald Trumps’s speech at the Republican National Convention, I made this joke, inspired both by the plagiarism in the current Mrs Trumps’ speech and by the speech itself:

As with all my other Donald Trump jokes however, it turned out that I was actually spot on. From the very revealing article Donald Trump’s Ghostwriter Tells All:

Now, I would like to clarify that I think all Hitler and Nazi comparisons are over the top. I also think that Mr Trump’s danger lies less in what he believes (he’ll change his mind tomorrow anyway or just lie again) than in being a psychopath. Many elements of fascism can be found in Mr Trump’s speeches. But until the first people will get killed, let’s just stick to Mussolini comparisons for now. 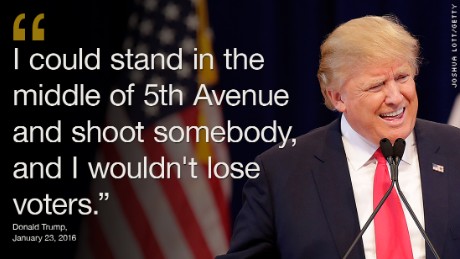 Travelling the world and writing about it. I have degrees in law and philosophy, but I'd much rather be a writer, a spy or a hobo.
View all posts by Andreas Moser →
This entry was posted in Books, History, Politics, USA and tagged Adolf Hitler, Donald Trump, German history, Hitler, Nazis. Bookmark the permalink.