Who gets to travel?

At the hostel La Casona in Potosí, Bolivia, there was this world map in the reception office, indicating where many of the visitors had come from. (Click to enlarge.) 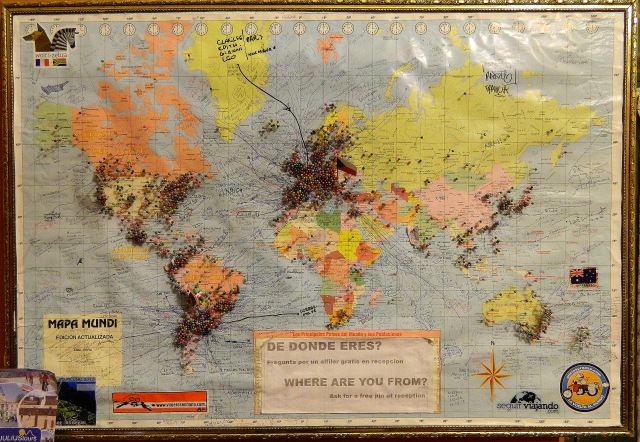 It’s obvious that many Bolivians would travel within their own country, just as visitors from neighboring South American states will drop by or pass through. The empty spaces on the map of South America are largely areas where not many people live, like the Amazon rainforest.

This map in one hostel in one city in Bolivia is not representative at all, but for the rest of the world, this map mainly shows where people have (1) money, (2) a passport which is useful for traveling, and (3) nothing else to worry about.

Many visitors from the United States and Canada, but millions more from Europe. In Asia the main source countries are Japan, South Korea, Australia and New Zealand. From Africa, almost only South Africa. From the Middle East, mainly Israel (maybe the one place where reason no. 3 is to escape from the things at home that one would need to worry about).

China and India, by far the two most populous countries in the world, are completely underrepresented. So is Russia. And almost all of Africa. Although, to be fair, many refugees from Africa and the Middle East get to “travel” quite a bit, and under much more adventurous circumstances than any “backpacker” can claim.

So what do you make of this?

Travelling the world and writing about it. I have degrees in law and philosophy, but I'd much rather be a writer, a spy or a hobo.
View all posts by Andreas Moser →
This entry was posted in Bolivia, Maps, Philosophy, Travel and tagged globalization, Potosi. Bookmark the permalink.

6 Responses to Who gets to travel?