The Transformers of Podgorica

When I went to Podgorica, I stayed at a hotel because I had to run the half marathon. I didn’t want a Couchsurfing host to have to get up early on a weekend and to see me in my sweaty clothes upon my return (although I did exactly that to another Couchsurfing host in Budapest a few months later). But I did agree to meet with Marko, who had offered to give me a tour of Podgorica.

“Let’s meet at the central square, next to the transformer statue,” he told me.

I had no idea who this Montenegrin transformer was, but I thought I would recognize him. Expecting something like the Jesus statue in Rio de Janeiro, I guessed it would have to be a hero, a partisan, an architect, a king or a monk.

Instead, it was a giant monstrosity composed of old metal and car tires, clothed in a supersized camouflage jacket, about 12 meters tall and with terrifying claws. It was one of the figures from the Transformers movie. Now I understood. 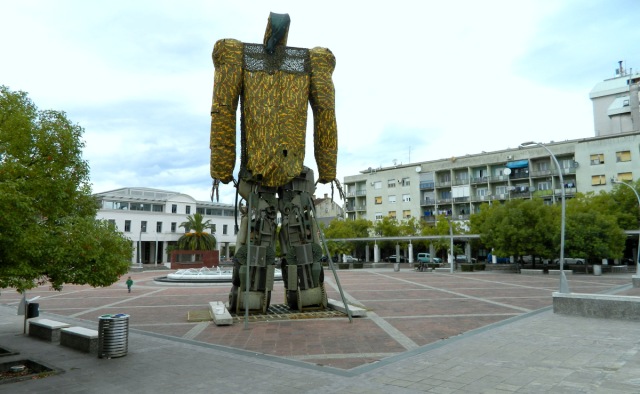 But Marko had been right, it did dominate Republic Square and was easy to find. Actually, the square was so empty that I felt silly for having told Marko exactly what I was wearing to make sure that we would recognize each other. Well, who would expect the central square of the capital city of a European country to be so empty on a Saturday afternoon? The giant Transformer must have scared everyone else away.

On our walk around town, I spotted a few more of these beasts.

No wait, the last one is Petar I, who ruled Montenegro when it was a theocracy. Yes, we Europeans used to have theocracies, too. Which is even scarier than the Transformers.

Travelling the world and writing about it. I have degrees in law and philosophy, but I'd much rather be a writer, a spy or a hobo.
View all posts by Andreas Moser →
This entry was posted in Cinema, Montenegro, Photography, Travel and tagged Cinema, movies, Podgorica. Bookmark the permalink.

4 Responses to The Transformers of Podgorica