I love books. So, naturally, I used to collect them. I kept all the books I had ever read, I bought dozens of books that I still wanted to read and I even bought antique books which I would never read but which looked good. My house was like a library.

And then I began to move to a different country every year. Books are a bloody hard thing to move, especially hundreds and thousands of them. So, I had to leave them behind. I sold some of them, I gave some of them away as gifts and many of my books remained behind in heavy cardboard boxes.

Now, because I know that I will move to another country, possible even another continent, every few months, I don’t have this obsession with ownership anymore. I know there is no point in keeping my books because they won’t fit into my bag when I move to South America, take a train to Russia or hike through Africa.

Now whenever I finish reading a book while on a train, in a park or in church, I leave it behind and hope that somebody will find it, pick it up and read it. If you have found a book on a bus in Malta, a train in Lithuania, a boat in Venice or a park in Romania in the last few years, chances are that it was one of mine. I hope you enjoyed it.

When leaving books in public places, I have the romantic imagination of somebody finding it whose life will be touched, or even changed, by the book. A poor child who will discover her love for literature. Somebody who will fall in love with a hitherto unknown writer. Someone who hasn’t traveled but will read about foreign countries for the first time. – I am aware that the book is probably more likely to end up in the trash, but still, each time I leave a book behind, I wonder who will read it next. 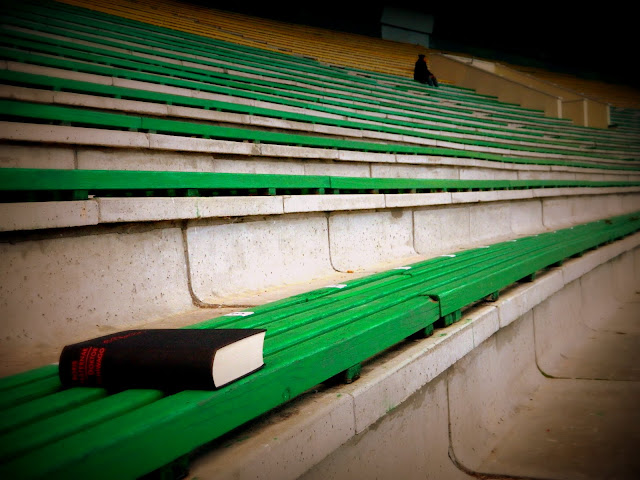 Another romantic thing which you can’t do with your e-book.

Travelling the world and writing about it. I have degrees in law and philosophy, but I'd much rather be a writer, a spy or a hobo.
View all posts by Andreas Moser →
This entry was posted in Books, Photography, Travel. Bookmark the permalink.