I receive a lot of questions through my blog and by e-mail, most of them about law. Some of them are interesting, some of them are funny, others are incomprehensible. The worst ones are those by people who believe that they are entitled to an answer or a reply. I never understand where such an entitlement would come from, in the absence of any contract between me and the e-mailing person.

Today, I received something from one of these people, but at least he managed to pose a real paradox (although I am not sure he intended to do so). Let’s take a look at his e-mail.

Hi Andreas
I have read a lot of your blog and it is very informative.

That’s true. It is very informative. It also informs you about how I deal with people who believe they are entitled to a reply, and about how to increase your chances of getting a reply.

I don’t mean to be pushy but I have attempted to contact you through 2 different mediums.
1. Your blog and
2. Via email.

“I don’t mean to be pushy but …” is as revealing as “I am not a racist but …”. And dear Sir, after already having exhausted two mediums, please don’t resort to the spiritual medium next.

If you are not interested in responding to my question then please tell me.

But then it gets better: some people who want a favour really believe that insulting the person that they want the favour from is a good idea.

If you can at least respond to this mail I will then know where I stand. I also understand that some problems are to [sic] complex and difficult and people do like the simpler life.

So, if I refuse to answer the questions of any- and everyone who e-mails me, I will be branded as a simpleton? Is that coming from the guy who can’t resolve his own problems without resorting to a lawyer? Accusing me of taking the route of the simple life without knowing the least bit about what I have been doing instead of answering this person’s e-mail is not a very promising method if you want to get my help, I can tell you. 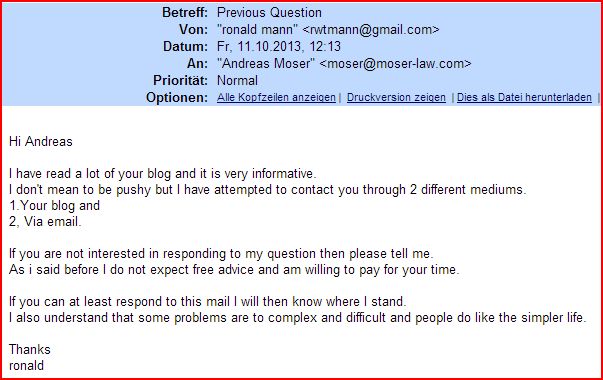 By the way, don’t let that scare you off. If you are nice, I’ll always be happy to help you, as thousands of my readers can attest to.

Travelling the world and writing about it. I have degrees in law and philosophy, but I'd much rather be a writer, a spy or a hobo.
View all posts by Andreas Moser →
This entry was posted in Law, Philosophy and tagged lawyers, legal advice, pushy. Bookmark the permalink.