Why did Romney pick Paul Ryan?

Ever since Mitt Romney announced his pick of Paul Ryan as his running mate in the US presidential election, people are wondering: “Why?” Luckily for my readers, I have gotten hold of Mitt Romney’s secret memo which outlines the reasoning behind his choice.

My recent trip to Europe and Israel has made it obvious that I have no foreign policy experience – maybe not even a foreign policy itself – and that I will be an embarrassment to America abroad. Because of that, it is important that I pick a VP candidate who will not outshine me on this issue. I will need somebody who preferably hasn’t even travelled abroad, especially not to Europe because people tend to get weird ideas if they spend too much time over there (when it’s really the Mormons‘ job to spread weird ideas to Europe).

My next weak spot is security policy. President Obama has withdrawn US forces from Iraq and tracked down and killed Osama bin Laden. There is no way I can compete with him on that issue. I would not even want to do anything military, it might ruin my haircut. 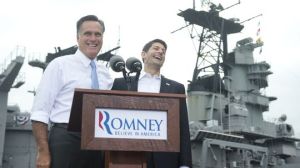 To cover up this security policy deficit, I will announce my pick in front of a (decommissioned) battleship. Even better, I have found a candidate whose last name is Ryan, which will remind people of Saving Private Ryan and of Tom Clancy’s character Jack Ryan. That should be enough.

As a multi-millionaire, I just love Paul Ryan’s tax plan. That’s a no-brainer. I wonder why these other Republicans who thought they had a shot at the VP slot didn’t amend their offers. These guys understand nothing about negotiating.

Members of my own party still doubt if I am a real Republican. In order to alleviate their doubts, I need to make certain that I don’t pick a female, a Jew, a Latino or someone black.

When I will be President and I will have to escape to a Presidential retreat or if Air Force one will crash on a remote island, I want a guy next to me who can hunt and fish and help us to survive. Because I was raised with servants and couldn’t even fry a schnitzel myself.

Also, this outdoor and hunting thing worked really well with Sarah Palin in 2008. I think. I am not sure because I wasn’t even following the campaign back then. I was busy making millions. Why should I care about anything else?

Travelling the world and writing about it. I have degrees in law and philosophy, but I'd much rather be a writer, a spy or a hobo.
View all posts by Andreas Moser →
This entry was posted in Politics, USA and tagged Mitt Romney, Paul Ryan. Bookmark the permalink.

4 Responses to Why did Romney pick Paul Ryan?