After the rather disappointing first teaser trailer, here is the first full trailer for “Skyfall”, the new James Bond film due for 26 October 2012.

As a big fan of James Bond, it hurts me to say this, but I am not yet convinced. Rather the contrary. Let’s hope the producers are only playing the game of low expectations. 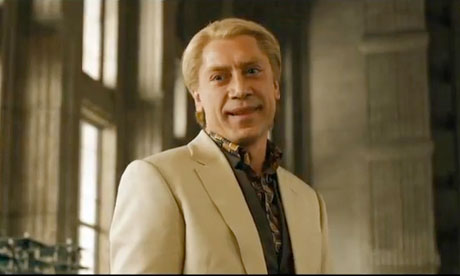 How can you take a villain like him seriously?

I have now seen Skyfall and it was better than expected. Read my review.

Travelling the world and writing about it. I have degrees in law and philosophy, but I'd much rather be a writer, a spy or a hobo.
View all posts by Andreas Moser →
This entry was posted in Cinema and tagged Cinema, James Bond, movies. Bookmark the permalink.