The Personification of Greek Austerity

Greece first cooked its books to enter the Eurozone, then used cheap credit to live beyond its means. A profligate pact by the Greek government and the Greek people expanded the state and ran up deficits and debt. With a budget deficit of more than 15% of GDP and government debt of more than 126% of GDP, Greece is one of the most indebted countries in the world. Tax evasion is rampant.

In order to receive further loans – on which Greece seems to be hooked like an addict – the Greek government has reluctantly promised some austerity measures and economic reforms. Except for some cuts and tax rises, the reforms have mostly been empty promises so far. Oddly, Greeks still think that none of this is their fault and that austerity is not necessary. Because of this, attending one of the many strikes is much preferred over working on reforming the country, as is blaming the EU, the IMF and Germany in particular.

Evangelos Venizelos to Mario Draghi, head of the European Central Bank: "Move over the money, Mario!"

Evangelos Venizelos to Jean-Claude Juncker, Prime Minister of Luxembourg: "Come on, just a few million. You have so many Euros in your little country."

Evangelos Venizelos to Jean-Claude Trichet, former head of the ECB: "Austerity? Reforms? You guys in Frankfurt really have funny ideas!" 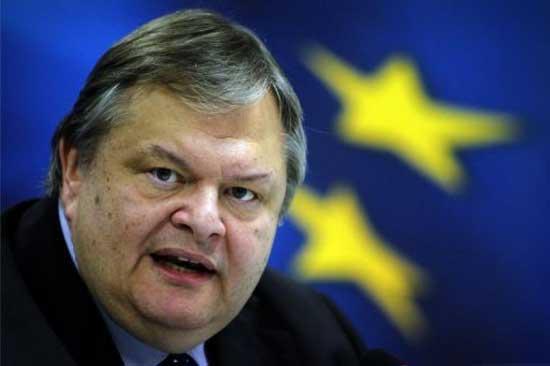 "I wonder if I can eat these two stars when nobody is watching."

Evangelos Venizelos to François Baroin, French Finance Minister: "What do you mean, you have steaks of less than half a meter? How is that enough for breakfast?"

"What a stupid meeting. No food at all!"

Travelling the world and writing about it. I have degrees in law and philosophy, but I'd much rather be a writer, a spy or a hobo.
View all posts by Andreas Moser →
This entry was posted in Economics, Greece, Politics and tagged EU, Evangelos Venizelos. Bookmark the permalink.

21 Responses to The Personification of Greek Austerity