East Germany and West Germany, seen from the outside

In the old days, before Erasmus, academic exchanges were still complicated: visa, health insurance, exchanging money. And then there was no internet, so you couldn’t start looking for accommodation before the move. The first week was usually spent at a hotel, buying a newspaper every day and telephoning all the “room offered” ads in the classifieds section. Foreign students coming to Germany faced an additional hardship: they had to decide in which of the two Germanys they wanted to study.

If you are surprised by the last sentence, you are either too young or you grew up (like me) in West Germany, where we would assume that, given the choice, everyone would naturally prefer West Germany over East Germany. “And you couldn’t travel that easily to East Germany,” many will object, but I just listened to an audio document from 1988, which completely destroyed this and other assumptions I had been holding.

In the last full year of German separation, Deutschlandfunk, a West German radio station, interviewed British students of German studies who had spent exchange semesters in West Germany and in East Germany, some of them even in both countries consecutively. Thus, they could report from both Germanys with first-hand experience and were able to compare their experiences. If you speak German, I recommend listening to the show. The students’ observations are refreshingly open and spot-on. And there is a ton of surprises in there, beginning with the mere fact that there was an academic exchange between the UK and the GDR (German Democratic Republic, the official name of not so democratic East Germany) at all. To the students from Britain, East Germany seemed more exotic than the FRG (Federal Republic of Germany, the official name of West Germany and indeed of the now reunited Germany), the latter of which one could always visit as a tourist. Thus, many students opted for a stay in the socialist country.

The British colleagues experienced the West German universities as rather anonymous mass universities, where they felt left alone, which pretty much describes the state of German universities today. It was hard to make acquaintances, let alone real friends. “The Germans weren’t interested in talking to us,” they said, and many who are currently trying to integrate themselves in Germany are nodding knowingly. In East Germany, on the other hand, the reception was better organized, but also more friendly and heartfelt. The British students suspected that this was due to their exotic status as West Europeans in the GDR. Because they also reported that exchange students from “socialist brother countries” (for example Bulgarians and Poles) were not treated brotherly at all, but with German nationalistic condescension.

Any foreigner coming to Germany is afraid of bureaucracy (even today), and both countries were bureaucratic. But in East Germany, there was always someone willing to help, while the students in West Germany all reported hearing the sentences “this is not within our purview” and “that is your problem” over and over again.

What they did prefer in the west, was studying itself. The freedom prevalent at West German universities was confusing at first, but the lectures were at a high academic level. In East Germany, the students felt that too little was demanded of them, and parts of the lectures even seemed “childish” in their anti-capitalist propaganda.

Interestingly, they couldn’t make out huge differences in economic terms. Like we in West Germany, the British students had heard stories of long lines in front of empty stores in East Germany and were surprised when they didn’t see any of that. They did find people in West Germany to be more materialistic (if they already made that finding in the 1980s, I wonder what they would say today), but the quality of life in East Germany was slightly better. There, restaurants were not only better, but also accessible to average citizens. Even students didn’t cook themselves, but went out. Food in the university canteens was the same in both German countries, by the way: “Every day potatoes, meat and some gravy. And in both countries the same cheap plastic dishes. I had always imagined a prison canteen to be like that.”

Outsiders are of course the perfect people to find out what West Germans thought about East Germans and vice versa. Taking German studies in the UK, the students had apparently learned about both countries in detail (as we have learned from John le Carré, the British Secret Service preferably recruited scholars of German). They were shocked how little people in West Germany knew about East Germany, how little they were even interested. There was an incontrovertible negative image, not based on personal experience and, more tellingly, with no curiosity to make one’s own experiences that might shake the preconceived notions. These descriptions resonated with me, because even today, this is the image of Eastern Europe that many Germans or indeed West Europeans have. It is poor, it is negative, one doesn’t want to travel there, one doesn’t want to meet anyone from there, and one doesn’t want to learn that it’s really not like that. One of the students said that she always received the same reaction when she told people in West Germany that she had previously lived in East Germany: “Oh”, followed by silence. The same reaction I receive when I tell people in Germany about Romania or Lithuania. “Oh”, and then an empty facial expression, laying bare the emptiness of the mental map east of the former Iron Curtain.

In East Germany, on the other hand, people had an overly positive image of the West, which was not in line with reality. A funny anecdote: the young British academics spoke of unemployment in Great Britain. The East German students were shocked, because “we have been reading about this in our books, but we always deemed it anti-western propaganda and didn’t believe it.”

The interviews end with a surprising moment (from minute 42:25 in the recording). The journalist asked the students, who had gotten to know both German states, where they would prefer to work if they had to choose between East and West Germany. The choice was unambiguous. These intelligent, educated experts on Germany all preferred going to the country which would no longer exist in that way just one year later, not least thanks to the contribution of their fellow classmates there. 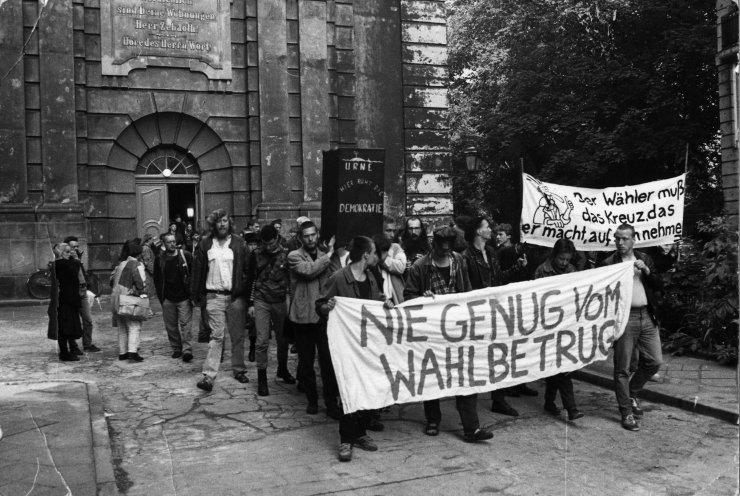 Travelling the world and writing about it. I have degrees in law and philosophy, but I'd much rather be a writer, a spy or a hobo.
View all posts by Andreas Moser →
This entry was posted in Cold War, Germany, History, UK and tagged German history, Media, university. Bookmark the permalink.

4 Responses to East Germany and West Germany, seen from the outside