Vrmac – where you get drunk from hiking

The only disadvantage about Kotor is its location in a fjord, surrounded by steep mountains, which to cross takes the sun a few cumbersome hours every morning while it already warms people and spirits elsewhere in the country, and behind which it will disappear again by 3 pm, just to perform a wonderful sunset elsewhere. But we citizens of Kotor never get to see that because Mount Vrmac lies between us and that sunset. Disappointed about the few rays of sunlight that graze and grace Kotor, we compensate by drinking a bit more.

Alternatively, you can follow the Balkanese saying “If the mountain won’t move out of the way, you have to get on top of it.” The path up to Mount Vrmac was planned or erected under the influence of alcohol, too, it seems. Instead of taking Euclid’s advice that the shortest distance between two points is a straight line, the path goes back and forth, left and right, zig and zag. When the Austrians conquered the mountain, they gave this topsyturvydom the important-sounding name serpentines and imported the concept for their Alpine roads.

But I have to concede one thing. Because the mountain is so steep that you can never see the distance still ahead, but looking back you see dozens of switchbacks, you receive a psychologically important confirmation about the hiking performance already achieved.

That may have a different effect on the way back, but then, the way back is always easier anyway. And my plan was not to return the same way, but to cross Vrmac and follow the movement of the sun, spending the morning on the Eastern flank, the afternoon on the Western flank and to walk down towards Tivat and the sun in the evening.

The day could not have been more beautiful. Seeing the bay of Kotor from a new angle, with the sun letting me forget the winter, the deep blue of the sea, the snow-covered peaks on the horizon, everything was as grandiose as if a painter had gathered all his energy to create one last masterpiece. The perfect combination of sea, forest and mountains, of colors and shapes made me almost dizzy, even without alcohol. Or was that already the high-altitude high?

By the time I reached the summit, Kotor still lay in the shadow of the mountains. 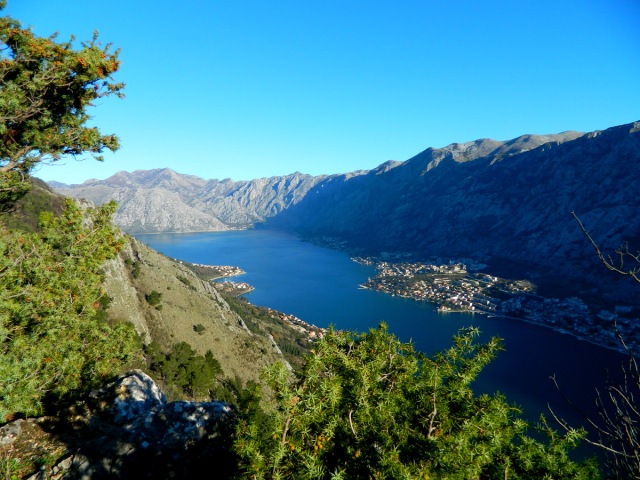 The few houses on Vrmac were deserted and had begun to fall apart, but the chicken coop was still fenced in. So, one could move there any day and begin a new life.

Living there, one wouldn’t need to worry about security either, because Vrmac houses one of the largest Austro-Hungarian fortifications, built in its current form in 1894, and which is still in good shape despite having seen battles in World War I. For the historical details, I refer you to the colleagues from the Austrian Society for Fortification Research, who list many more details on their page than anyone can remember. Just a bit of context: Kotor was Austria’s most important military port in the Southern Adriatic and therefore required considerable protection. Right behind Kotor (called Cattaro at the time), there was the border with Montenegro, leading to skirmishes and little wars from time to time. It was in this bay, by the way, that the Austrian Navy saw a revolutionary mutiny in February 1918. Yes, even Austrian history can be interesting.

But back to the fortification on Vrmac. The beautiful thing about Montenegro is that nobody would put up any guards, let alone lock the door. Thus, you can frolic around the fort freely. If there are still landmines from World War I, they must have decomposed by now, I was hoping.

To venture into the interior of the fort, particularly into the tunnels and basements, a lamp would be useful. In accordance with my guidelines on adventure (no. 17), I had of course not brought a lamp. That looked like a stupid decision, but only for a short time, because equally in accordance with aforementioned guidelines (no. 5), two guys from Russia appeared from the forest, who also wanted to explore the military installations, who had lamps and whom I joined in the spirit of peace among the peoples. Now, “two guys from Russia” sounds very innocent, but anyone who has Russian friends, can imagine what the two were thinking when they said: “We’ll explore the fortress from the basement to the roof. Let’s go!” Because Russians do it like this:

But what could I do, I didn’t have my own lamp. Cling together, swing together. Literally, for the two guys pulled themselves up 2-meter walls and jumped through windows more easily and elegantly than I get out of bed in the morning. Whenever they spotted a hole in the ground, through which one could descend into darkness even deeper, they screamed “woohoo!” with joy and swung themselves down. 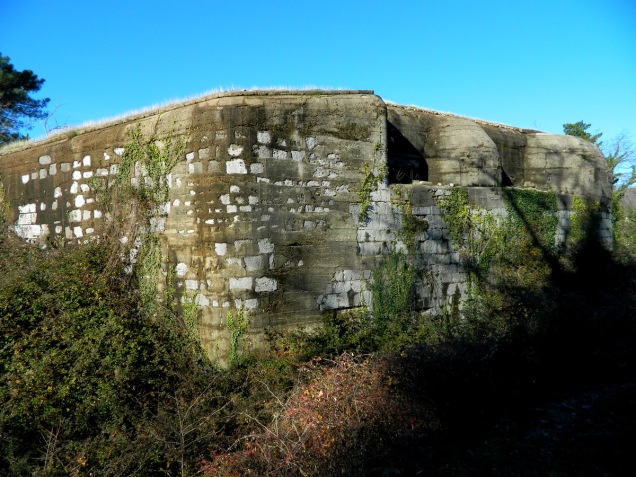 But thanks to these guys, I really saw every corner of the fortress, all the way to the roof, which we somehow managed to scale. How I ever got back down without falling, I have no idea.

After the fortress no longer served any military purpose, a monk had apparently lived in one of the casemates, because the walls were painted with Orthodox icons.

Speaking of casemates, I didn’t know the word either until that day. But one of the two Russians could explain every place and object in very good German; „zwei Maschinengewehrpositionen“, „Munitionslift“, „Panzermörserlafette“. Lots of terms which even I as a native speaker don’t know. He was studying German at the university in Saint Petersburg, he said, and I chose not to ask if he referred to the Military or the Intelligence Service Academy.

The spontaneous encounter and the survived adventure had intoxicated me so much that I chose the longer path to Tivat – following the whole ridge of Mount Vrmac to the north first -, not realizing that said path would, like so many endeavors undertaken in an intoxicated state, lose itself in the brushwood at some point.

But first it went upward, opening new views: to Perast, to the mountains bordering Bosnia, to churches hidden deep in the valley

or planted on hilltops, 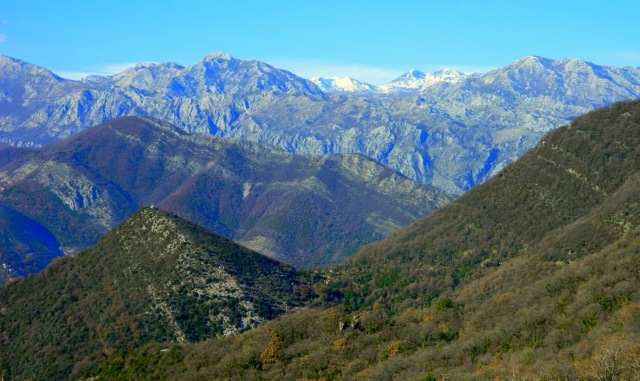 but in both cases equally forgotten by the world.

The only place I no longer saw was Tivat, the destination of the hike. Because there was suddenly another mountain, of whose existence I had not heard anything before, blocking the way and derailing my plan. Where I spotted something like a trail that went vaguely in the right direction, I followed it. Where I found an empty streambed, I used it to descend towards the valley. And when I had gotten completely lost, I fought through the forest like the Partisans once did, fighting here against my grandfather (among others), who had chosen the wrong side and was shooting up the forests (and probably more) with a German Volksgrenadier unit.

One thing that scares me even more than the Wehrmacht are dogs. Unfortunately, it was exactly these monstrous creatures whose barks indicated that I had approached what I hadn’t really been missing: civilization. There were only a few houses in the hills far above Tivat, but now the direction was obvious. The barking alerted the owner of some of the dogs and he stepped into his garden, greeting me with both “dobar dan” and the question from where I had walked. When I explained that I had come all the way from Kotor on foot, the friendly gentleman, who had already calmed his dogs, was impressed enough to invite me to some rakija right away. My only New Year’s resolution had been to be more social and less shy, so I accepted happily.

He led me into a garden shed full of hunting trophies, photos and guns. That explained the many dogs, for which he had collars with GPS, so that the dogs would lead him to the boar. The hunter spoke some English and German and I a few words of Serbo-Croatian, and thus we merrily spoke about hunting (“I hunt boar, but I raise rabbits to release them in the wild”) and the current close season, which he strictly adhered to, about Germany (his sister lives in Karlsruhe), about the deserted villages and churches on Mount Vrmac and about driving from Germany to Montenegro. “The best way is by motorcycle,” he insisted: “Freedom, air, sun, so close to nature!” I told him that my father had once driven a moped from Germany to Mostar in the 1960s, but had turned back just before he could see the beauty of Montenegro.

The hunter pointed out two black-and-white photos on the wall behind me (all of them hunters, too): “This is my father, and this is my grandfather.” Then, he nodded to a photo next to the door and said, laughing but not jokingly: “This is my second father.” It was Tito.

There may be no more Yugoslavia, but that gentleman was still a Yugoslav to the core. In the corner, there were a Croatian and a Montenegrin flag, one for his ethnicity and one for that of his wife. If he had turned on the record player in the corner, I am sure a brisk anthem for Marshall Tito would have filled the room with music and memories.

During the whole conversation, I managed to limit the intake of the extra-strong rakija to one and a half glasses. But because my stomach had not been fed anything more than one müsli bar the whole day, even that was too much. I was seriously tipsy, my head was heavy, as were my legs. My host seemed to notice, because he carefully explained to me that I would simply have to follow the road down the mountainside to get to Tivat safely. Luckily, I didn’t walk into any police sobriety checkpoint.

Travelling the world and writing about it. I have degrees in law and philosophy, but I'd much rather be a writer, a spy or a hobo.
View all posts by Andreas Moser →
This entry was posted in Austria, History, Montenegro, Photography, Travel and tagged hiking, Kotor, Tito, Tivat, Vrmac. Bookmark the permalink.

19 Responses to Vrmac – where you get drunk from hiking

Leave a Reply to Agness of eTramping Cancel reply