This will be a short book review because Robert Proctor’s book about the dangers of tobacco, smoking and cigarettes can be dismissed outright after reading the title and the introduction.

Although I occasionally smoke cigars, I know it’s neither healthy nor smart. I am not sure we need a new book to tell us that, but I will give Robert Proctor the benefit of the doubt on that. Maybe he has uncovered new evidence or performed new research. – Unfortunately for him, I will never find out because I just can’t get over the title of the book and therefore will never read it: “Golden Holocaust”.

I am against the inflationary use of the term “holocaust” even for other acts of genocide because it seems to deny the singularity of the Holocaust against the European Jews between 1933 ad 1945. Genocides also took place against other groups, e.g. the Herero or the Armenians in the Ottoman Empire and all of these weren’t less gruesome for the individual members of these groups as the Nazi Holocaust against the Jews was for the Jews of Europe. Still, the Holocaust that originated in Germany against the Jews is unique in many historical aspects, especially in the way that it was openly declared as the government’s policy, that every arm of the state, as well as industry and private citizens participated in the murder of people who had until then been their neighbours and colleagues and that all of this began in peacetime. The industrial, mechanical and bureaucratic scale of the Holocaust also make it unique among all genocides.

And now comes Robert Proctor and compares the organized mass murder of 6 million people in concentration camps and mass shootings with smoking a cigarette, a voluntary act which contributes to illness and the early demise of a small percentage of its users. What an outrageous comparison! Do I really need to point out that a cigarette smoker can quit? That he can stop buying cigarettes? That he can get help against a possible addiction? That there is treatment against smoking-related illnesses? – Do I really need to contrast this with the short life in a concentration camp? I don’t think so.

Robert Proctor explains his choice of words on page 11 of his book: 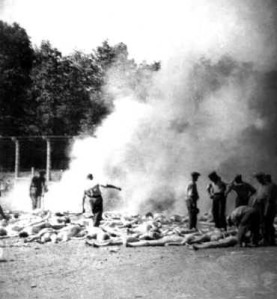 I use the term holocaust with caution.

No, you don’t: you put it in the title of your book!

It becomes obvious that Mr Proctor – a professor of the history of science and one who has even published research about Nazi Germany – tries to equate the Holocaust with the voluntary consumption of cigarettes that come with a warning label. This equalization is wrong, it is tasteless, it is shameful, it is dangerous.

I recommend instead: “Night” by Elie Wiesel.

Travelling the world and writing about it. I have degrees in law and philosophy, but I'd much rather be a writer, a spy or a hobo.
View all posts by Andreas Moser →
This entry was posted in Books, History, Holocaust, Language and tagged Health, science, smoking. Bookmark the permalink.