“The New Yorker” confirms my warning about terrorist geeks 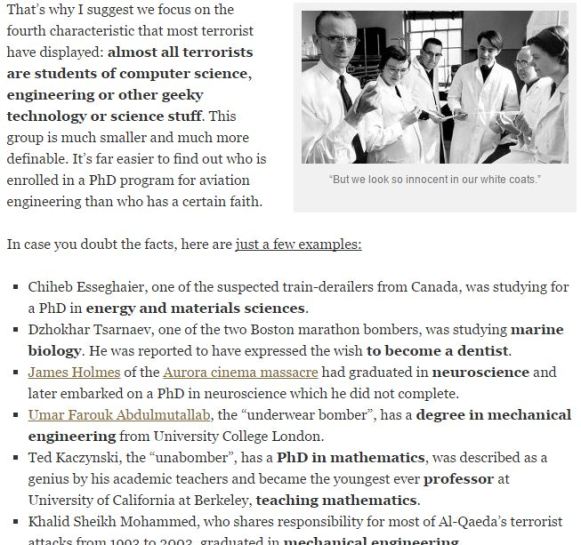 Listening to my warning would have prevented countless terror attacks since and saved hundreds of lives. Unfortunately, the guys working for American, French, Belgium and Turkish security services prefer to waste their online time on Facebook or playing poker instead of reading my anti-terrorism blog.

I had already suggested three years ago that people who enjoy cutting people open or, even worse, dissecting dead bodies, can’t be normal. The longer they carry out that work, the more they regard humans as machines. Engineers and computer scientists of course study such courses because they prefer machines over humans anyway. None of these professions are known for their empathy (just think of Dr Radovan Karadžić or Dr Ben Carson).

I had also suggested back then that people in the social sciences, who regard humans as humans and technology as secondary, are much nicer and harmless. This will be a bit generalizing, but I have since noticed that people with technological backgrounds tend to be rather cold when it comes to discussing political or social issues. They immediately focus on the technical aspects, leaving the questions of values and ethics aside.

These findings have now been confirmed in an article in “The New Yorker”:

Exactly what I had written three years ago. Maybe this time, somebody will listen.

(Hat-tip to my reader 中本哲史, who not only came across the story in “The New Yorker,” but who remembered my three-year old article. I bet he is a geek, too.)

Travelling the world and writing about it. I have degrees in law and philosophy, but I'd much rather be a writer, a spy or a hobo.
View all posts by Andreas Moser →
This entry was posted in Education, Politics, Statistics, Technology, Terrorism and tagged science. Bookmark the permalink.