You know that a country is going through an economic crisis when your friends from Brazil don’t begin their days by posting photos of their morning coffee, but by commenting on the exchange rate between the Brazilian real and the US dollar. When more people know the exchange rate of their country’s currency than the league position of EC Bahia, it’s a sure sign that the currency is tanking (although both of them are doing equally bad).

And indeed: Since I so cleverly made the decision to move to Brazil half a year ago, the Brazilian real has continued its downward trend. Compared to a year ago, it lost almost half its value. 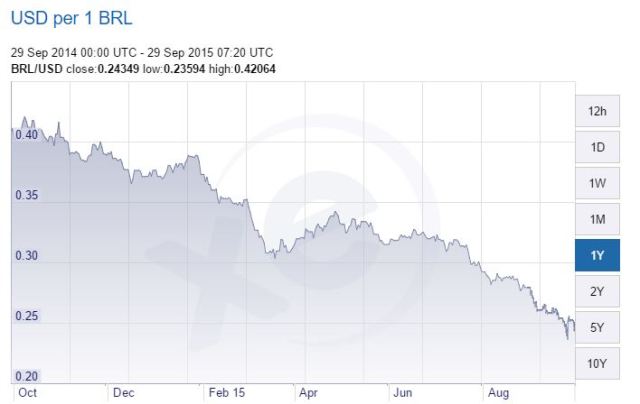 I am currently using the Lonely Planet South America guidebook to plan my upcoming move to Brazil, and it lists the exchange rate as 1 euro = 2.69 reals. That was in August 2013. Now, one euro buys 4.6 reals. What euro crisis, I wonder?

For someone like me, who earns in EUR and USD, this means that Brazil is becoming more affordable. Granted, some of these gains are eaten up by inflation, but as long as inflation is lower than the loss of the currency’s value, I will be fine. I won’t need to purchase any imported goods, so I won’t be hit by the reduced international purchasing power of the real either.

Maybe, just maybe, I might even be able to rent an apartment and won’t need to sleep in parks and train stations. What a luxurious thought, thanks to Brazil’s economic policy!

Travelling the world and writing about it. I have degrees in law and philosophy, but I'd much rather be a writer, a spy or a hobo.
View all posts by Andreas Moser →
This entry was posted in Brazil, Economics, Statistics, Travel. Bookmark the permalink.