Everyone knows that tobacco products are potentially dangerous, nobody is forced to smoke, and after the wide-ranging smoking bans in public places, there is hardly any harm caused to third parties. Yet, some countries require that shocking warning pictures be printed on the boxes. These photos of smoker’s legs, cancer and death are supposed to drastically illustrate the consequences of lighting up, in the hope of ultimately convincing the smoker to kick the habit. 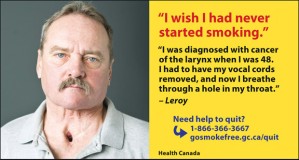 Meat products lead to the gruesome treatment and killing of other living beings against their will, although there are plenty of food alternatives. Yet, nobody thinks of printing photos taken inside slaughterhouses on the packaging of salami slices of chicken wings.

Isn’t it weird that one is encouraged to preserve one’s own life, while the extinguishing of other lives doesn’t seem to cause any moral concern?

Travelling the world and writing about it. I have degrees in law and philosophy, but I'd much rather be a writer, a spy or a hobo.
View all posts by Andreas Moser →
This entry was posted in Death, Health, Philosophy and tagged ethics, meat, tobacco. Bookmark the permalink.