Based on the statistical life expectancy in Germany I have another 39 years to live.

It’s half-time in my life. If this was a football match, you would watch some commercials and listen to daft commentary by a former player or a brief news bulletin with the latest from Ukraine or Iraq. Here, you will get a review and an outlook.

Almost five years ago, a few days before my 34th birthday, I took a time-out: for a whole week no phone rang, I had no internet, received no e-mails. No newspapers, no TV, no appointments, no work, no projects, no responsibility, no deadlines for a full week. I was cut off from the world. I had something which most people will never have in their lives: I had a whole week to think, and to think only. There weren’t even any books to distract me.

Egocentric as I am, my thoughts centered on myself and my life. I had been working a lot until then, was an attorney, had opened my own law firm, which kept me very busy, at 26. I was actively involved in local politics and in social and political committees whenever I could. Far too rarely did I say “no”, far too often the week melted away without having a single moment to take a breath.

But that experiment only worked because I didn’t know how long it would take. If you grant yourself a time-out of one week, you will only think about what to do after the break and all the work you’ll have to catch up with. That won’t help at all. In my case, and now I finally have to explain how this time-out came about, I was arrested by the Iranian Intelligence Service while travelling in Iran in 2009. I spent one week at Evin prison, in solitary confinement, only interrupted by nights of interrogations for which I was always blindfolded. I had no idea how long this imprisonment would last. After two days, I had already accepted the fact that I would probably stay in Iran’s most notorious prison for two or three years.

I paid a price for this insight.

This subjective certainty of a long, deep and coerced break was necessary for the decision to change my life. Until then, I had always been able to postpone such thoughts to the next week, month or year. But now I was lying on the concrete floor, warding off ants and looking for a sleeping position that would be easiest on the parts of my body that had sustained beatings with batons. There was nothing to keep me from thinking about myself.

I knew I had other interests in life besides work: I had been travelling a lot already, from Australia to Israel, from the US to Syria. I had always enjoyed being in nature and I could get lost in a novel for days. Simple things, which made me happier than solving other people’s problems in court. But why did I spend 90% of my time with work instead of pursuing my interests?

That’s when I decided to change my life. After the one-week time-out I immediately quit my job as a lawyer and moved from Germany to London, where I began to study philosophy.

That was the real half-time in my life.

“Let’s see how it goes. I can always return to Germany after a year and work as a lawyer again,” I thought when I moved to London. I stayed for two years. Then I had enough of the big city and moved to Malta. There I missed the forest, so I moved to Lithuania the next summer. One harsh winter in the Baltics was enough, so I fled to Italy after a year, where I still live now. For three years I have been working exclusively as a freelancer, doing translations and some freelance legal work, but only as much as I have to in order to finance my life and my travels.

Five years I have been roaming around Europe now. I had been convinced by the idea of a united Europe before. Now I have filled it with life. That’s what the EU should subsidize, not cattle farms or highway bridges. I have limited myself to Europe because I had neglected my own continent during my prior travels, but also for reasons of convenience. If you don’t need a visa, no residence permit, absolutely no piece of paperwork to emigrate, emigration is easy. Moving from one EU country to another involved less bureaucracy than moving within Germany.

But often I stand before the map of the world and dream of continents which I have never set a foot on or where I only spent a few days. I have never been to South America, nor to the Caribbean. Dreaming of trips to India and Nepal, Bolivia and Chile, Zambia and Zanzibar, I am often overwhelmed by the feeling “I am running out of time”. Hence the following decisions in this half-time of my life:

Sometimes I had entertained the thought of working as a lawyer again for a few years in order to save something and go on a trip around the world afterward. But meanwhile I have learned to survive without much money, so that I don’t need to work full-time and save. I can still work as a lawyer if I will one day be too old to travel. Now, my life is too precious to be wasted in an office. 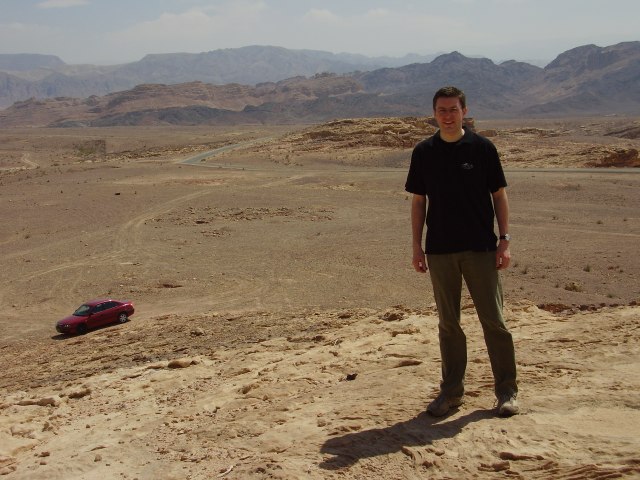 I’d rather be lost in the desert than stuck at a desk.

There are at least 160 countries I haven’t seen yet. If I don’t start travelling around the world now, I will never make it. I am not even one of those travelers that tick off lists, but if I was to tell you about the cities, mountains, national parks and countries that I still want to see, we’d be sitting here for hours.

It is indeed sad that I haven’t even visited all EU member states yes, but I can still go to Denmark or Poland when I will be 65. That’s less of an option for Somalia or Iraq. (It would however be ironic if Denmark or Poland would have become more dangerous than Baghdad or Mogadishu by the time I will turn 65.)

So, I will embark on a journey round the world. I haven’t decided yet whether the journey will take off towards the east, the west or the south (the north is too expensive). Maybe I will plan one year ahead, but I am sure I will be gone for several years. And after circumventing the globe once, I might do it again if I enjoyed it.

So far, so easy. Now to the real challenge: I plan to document and accompany this journey by writing about it. Long travel stories. Anecdotes. Reports on current events. Articles on the history, politics and social structures and movements of the countries I visit. Short stories. Poems. Political commentary. And of course you will still be able to enjoy my photos.

I have been writing already, otherwise this blog would be rather empty, but 90% of my filled notebooks linger in drawers and backpacks without their content ever having been shared with you, my esteemed readers. Travel reports and photos from Hiiumaa to Sardinia, from Las Vegas to Damascus have been waiting for their publication for years.

This is a waste of my experiences, my thoughts, my creativity and the talent, which I see twinkling in the moments in which I am beset by delusions of grandeur. This has to change.

This will change! Because I vow to finance this trip around the world mainly by writing and publicizing. The possibilities are plenty: pitching articles and photos to newspapers and magazines, writing for travel guides, crowdfunding, giving lectures and speeches, contributing to radio and TV shows.

When do I set off?

I am generally a quick decider, but a project of such magnitude requires a little bit of preparation if I want to avoid running out of steam somewhere in the Atlas mountains or in the Caucasus.

First I have to get my writing and photography portfolio up to date because nobody will finance Schrödinger’s pig in a poke. I have to establish contacts with newspapers, apply for visas, organize places to stay, improve my fitness, learn Spanish, Russian and Arabic, and allow sadistic doctors to poke anti-malaria vaccines into my butt.

It may thus take well into 2015 until I actually set off. But one date is fixed already: for my 40th birthday on 6 July 2015, I will definitely be gone. At that point in life, for which others aspire to own a house and two children (or dogs), I will be camping somewhere out in the open, watching the stars or admiring the sea.

I have always wanted to be a hobo.

Travelling the world and writing about it. I have degrees in law and philosophy, but I'd much rather be a writer, a spy or a hobo.
View all posts by Andreas Moser →
This entry was posted in Life, Philosophy, Time, Travel and tagged birthday. Bookmark the permalink.