While I am studying the bus timetable which is posted in the window of the bus company’s office in Lipari in order to plan my day, a friendly and helpful bus driver walks over and not only hands me a copy of the timetable but also offers several hiking suggestions for the island. “Wait down at the port under the large palm tree,” is his response to my question about the bus stop where I can catch the next bus to Quattropani. At the bus stop, a large dog lounges in the sun and is apparently full or spoiled enough to ignore a piece of chocolate croissant which a teenager throws in front of its muzzle.

The fully occupied minibus wiggles up the mountain behind Lipari City, offering a wonderful view of the city with its dominating castle at every turn. Every stop comes along with some chin-wagging. Boarding and exiting older ladies are being helped by other passengers. Soon, I find out why the bus driver has been on the phone most of the time: he also acts as a delivery man. In front of some driveways and at some stops, he is being handed parcels or shopping bags, at others he hands these through the window to the recipients who are already waiting.

At Quattropani, a town scattered generously across the hillsides, I get off the bus and walk towards the Old Church in the very north of that community. The very frugal church, which appears vulnerably small next to the grand forecourt, was built in 1646 but has recently been renovated, painted in white, without any ornaments or adornment. Today it is unfortunately closed. The architecture is so low-key that the front with the three green metal doors could be that of a residential building. They wind blows like crazy, but what is even more crazy is the view. Whoever designed this church might have understood that it won’t be able to compete with what nature is offering here – and didn’t even try to. 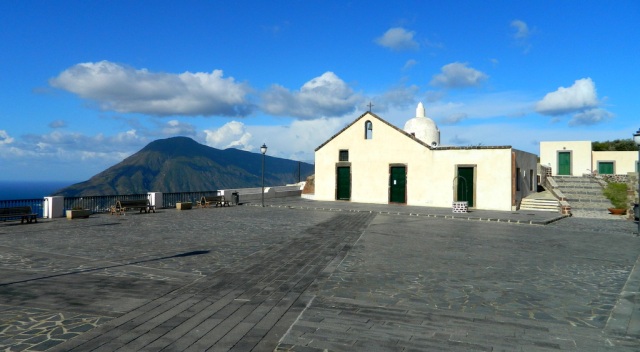 Five of the six other Aeolian Islands can be seen from here. The volcanic mountains of Salina, Panarea, Filicudi, Alicudi and Stromboli stand out from the royal blue sea. “Come visit us as well, we are at least as beautiful as Lipari!” they seem to be calling out to me. Behind the church there is a light flank of the hill to a spot which is protected from the wind. Yellow flowers are blooming, the grass is green and soft, a wonderful place for a pick-nick. I would love to lay down in the grass for a few hours and to enjoy the sun, but my ambitious hiking plan pushes me forward. 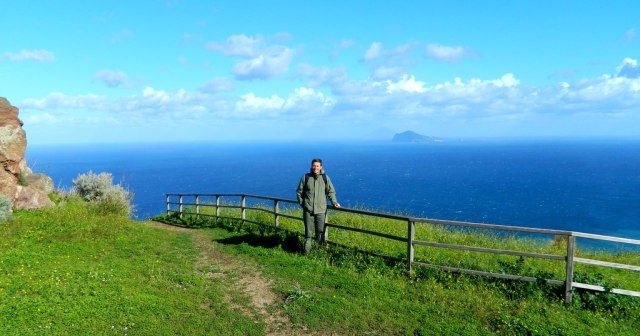 Along paths which are half-overgrown or have been washed down the hillside, I walk south. Sometimes I have to climb around a bit, but except for cacti I don’t face any dangers on this trail which runs high above the sea and offers terrific views on the two volcanic cones of Salina. For several hours I don’t meet any other human being. Because I can always detect the path, I don’t lose the trust in my map, but I do wonder when was the last time that somebody walked the same route. In the evening at Lipari City, Antonio, the owner of a bar which is depressingly empty that night, will tell me about a British lady who lives on Lipari and cuts the walking paths clear of scrub. “She does this without getting paid: no Italian would do that,” he says, half appreciatively, half uncomprehendingly. Thanks to the unknown lady! 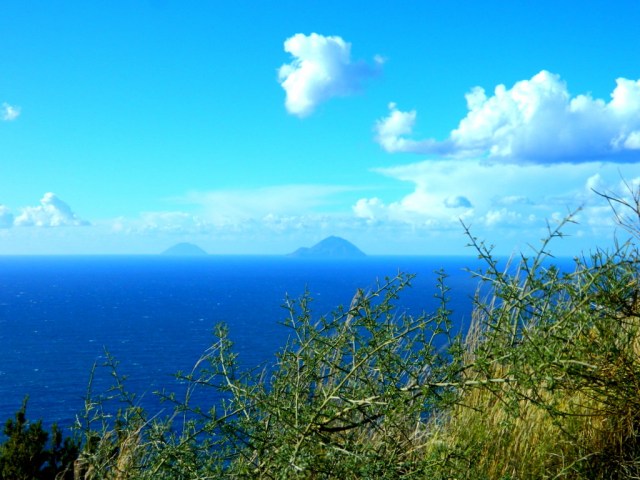 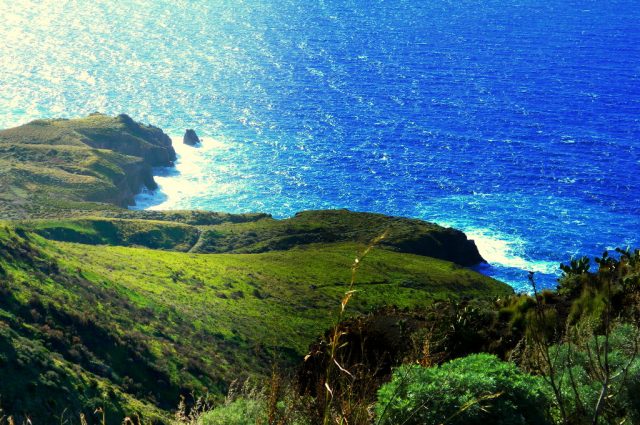 Additional colours – but also additional smells – come into play when I climb down into a valley which used to serve as a kaolin mine: Cave di Caolino. The rocks glimmer in different colours like a rainbow, from pink to gold to pitch-black. Some few fumaroles emit smoke and foetid odour. The volcano tries to draw attention to itself, like an old retiree fighting against falling into oblivion. 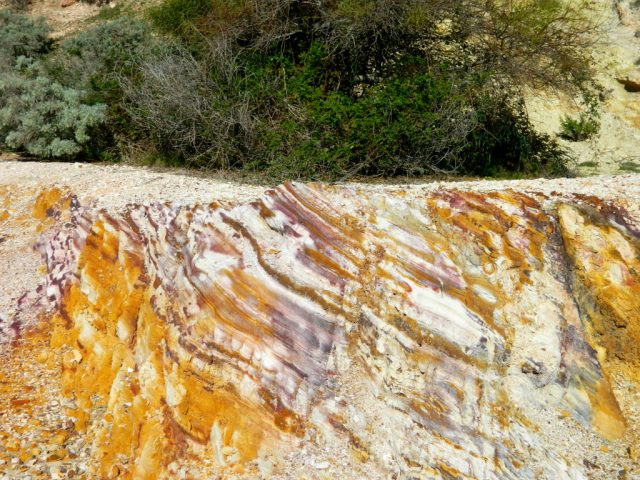 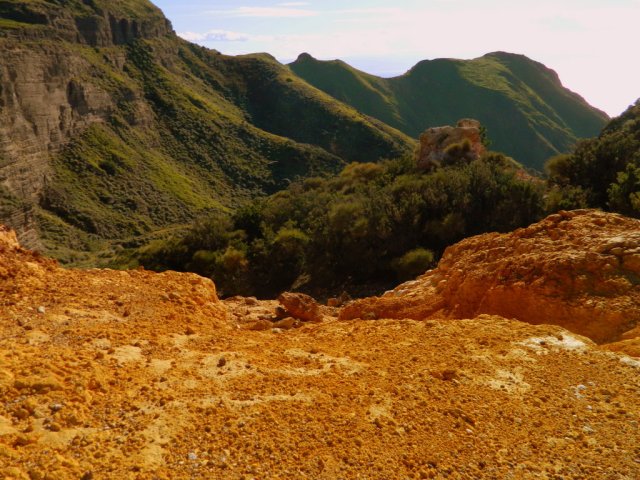 The path down through this play of colours is flushed out and finally turns into a veritable river bed, which is so overgrown and blocked by fallen trees, that I have to look for another way. But orientation is easy: always along the coast until I will be back in civilization.

But first, I encounter the exact opposite of civilization: a ferocious display of the forces of nature. From west, where the sun is shining strongly, dark clouds are moving in. They are fully laden with water, which is discernibly itching to receive permission to pour down as heavy rain. A lot of rain, judging by the looks of the clouds. They are coming closer to the island, I quicken my pace. But then the clouds burst open and return the masses of water to the sea before they have made landfall. A fantastic combination of sun, clouds, rain and the sea. Never before has the circuit flow of evaporation and rain presented itself so beautifully. 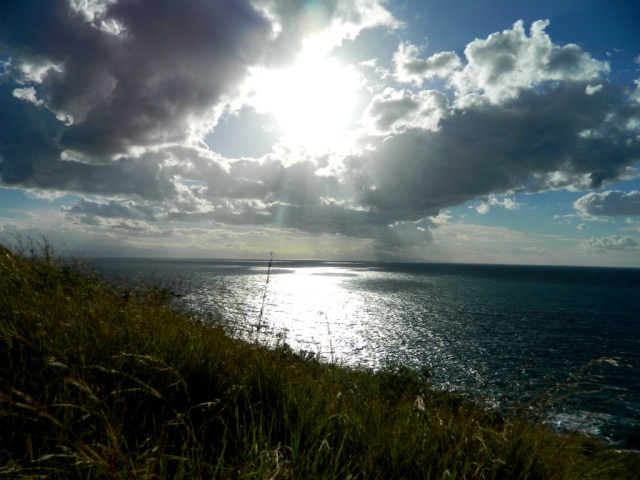 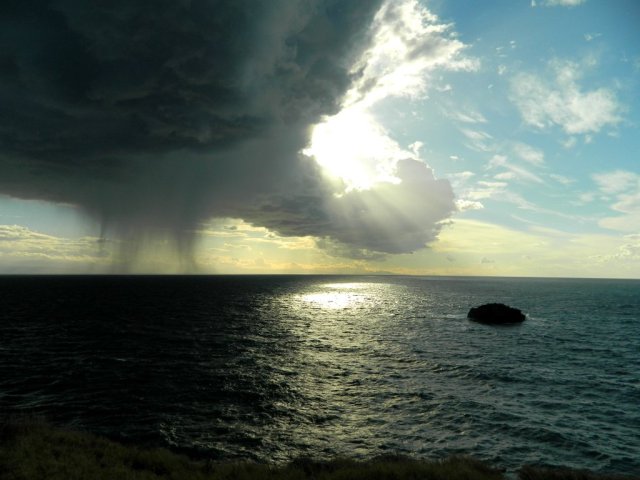 Having reached the thermal baths of San Calogero, already used by Greeks and Romans, I unfortunately cannot linger. The drizzling rain has turned into hail. The trees at the side of the road, which begins just here, offer only little protection. An old Fiat Panda, green like a frog, stops and al old man beckons me to ride with him. He doesn’t go all the way to Lipari City, but in the right direction. In this hailstorm any kilometre surmounted is a gain. He tells me that he produces vino dolce, sweet wine, which together with capers is the speciality of the Aeolian Islands. After the typical conversation about where I am from, what I am doing on Lipari, where I am going next, the friendly gentleman asks me if I might want to try a bit of his wine once we get to his house.

I usually don’t drink any alcohol and I would rather go looking for a spot from where I could photograph the sunset. At first, I only accept out of politeness, but when we reach Pianoconte, it is still pouring with hail and rain, so that we have to remain in the car anyway. I gradually allow myself to get infected with my newest acquaintance’s lack of urgency. The winemaker has some unlabelled bottles and plastic cups in his car and pours me a full cup. As soon as I taste the sweet wine, I am charmed. This time, I don’t have to lie when passing a compliment on an offered drink. It is the first time that I like a wine that I taste. Although the price of 15 Euros seems quite high (I could get 15 bottles of my favourite Sicilian drink Spuma for that), I accept the offer and conclude and perform the purchase contract right away, before saying goodbye and continuing towards Lipari City.

It is only raining lightly and the bus will only come in an hour, so I walk along the road, but – as happens so often in Sicily – I don’t have to wait long until somebody gives me a ride. A small Suzuki jeep has some space in the cargo bay, where a wooden chest covered with pillows is located, apparently the family’s child car seats. During the ride I learn that bruttotempo seems to be the comparative to maltempo (bad weather), but I am more concerned about hitting my head while we are thundering down the curvaceous road into the valley. The driver is so nice that he takes me to my favourite port Marina del Corta. When he turns around and drives off, the back door of the car swings open and the wooden chest glides from the cargo bay, so that the driver has to stop and get out. He laughs and waves towards me in his friendly way. I don’t mind at all that I have missed the sunset. 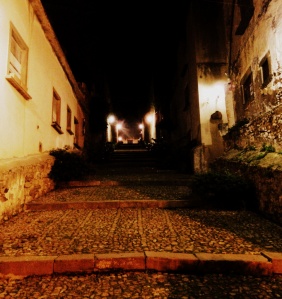 The actual highlight of Lipari City, the castle with the cathedral and the museum is already closed by now. But the castle hill which houses all these institutions is not closed. I walk up the long, steep stairway towards the acropolis, which is that large that it seems to be a city within the city. Excavations, five churches, fortification walls and city gates, built by Greeks, Romans, Normans, Spaniards, and a prison for political prisoners at the time of Mussolini: almost the whole history of Sicily can be studied here. But now I enjoy the quiet between the enormous walls and the vista on the harbour.

Tomorrow I continue to Vulcano, although I could already use one uneventful day to let all the new impressions sink in.

Travelling the world and writing about it. I have degrees in law and philosophy, but I'd much rather be a writer, a spy or a hobo.
View all posts by Andreas Moser →
This entry was posted in Italy, Photography, Sicily, Travel and tagged Lipari. Bookmark the permalink.