The second paper in my second-year module Contemporary Social and Political Philosophy as part of my MA in Philosophy had to discuss the conflict between egalitarianism and the sufficiency criterion.

Here are my thoughts on this, as always confined by the strict limit of 2,000 words:

Even if the social, economic and political progress made in large parts of the world over the past decades is tremendous, inequality remains a nagging concern. Inequality is at the centre of many socio-economic debates1 and it inspired the “Occupy” movement with its slogan “We are the 99 %” which refers to the concentration of wealth among the top 1 % of income earners (who own almost as much as the remaining 99 %). 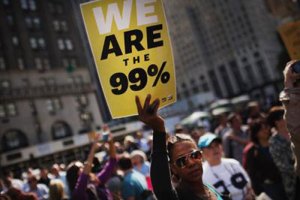 As someone living in London, where I can see extreme inequality just by walking the few miles from Westminster to Peckham, I share the dismay about inequality.

But does it really matter that somebody owns a car that costs so much that the money could feed a family for a lifetime? Or is there nothing wrong with this as long as that family won’t starve or become homeless?

Equality seems to be an intuitive aspect of our thinking. After all, most of us find political and legal equality desirable.

Rawls, among others, has pointed out that the distribution of assets as well as talents, and thus the incomes derived from putting these talents to use, is arbitrary2. It is a “natural lottery”3 where some of us are dealt a good hand, and others a dismal one. He constructed the thought experiment of the “veil of ignorance”4 to argue for a more equal distribution of income and assets: if we were to distribute talents and assets in a fairer world, we could only do so if none us knew which place in that world we would take up. Only if we didn’t know whether we would be born healthy and to rich parents in Oxfordshire or poor and blind to a single mother in Mombasa, we would strive to find an equitable distribution or include a mechanism to compensate for different talents and possibilities.

Frankfurt, on the other hand, denies equality this great moral importance and argues that we should rather be interested in sufficiency5: “If everyone had enough, it would be of no moral consequence whether some had more than others.”6

This observation is true, but it concerns outliers, as millionaires and billionaires are both so far removed from the average (remember the 99 % debate), that the differences between them are far less visible than those between a middle class family in Hampstead and a family of unemployed in Tower Hamlets. That we are less morally outraged about something which we observe less, is understandable and does not imply approval.

Frankfurt goes so far as to argue that the preoccupation with one’s comparative economic status “contributes to […] moral disorientation and shallowness”9. He begins to sound rather like a life-coach when he recommends to forget about comparative equality and to “discover […] what he himself really cares about and what will actually satisfy him” instead10. 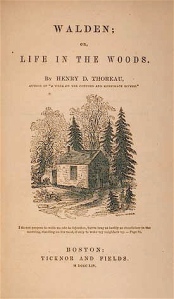 I personally share this Thoreau-like focus on having a good life with as few material means as possible, but as long as around a billion people are suffering from regular hunger, I find this question rather academic. Also, I would not want to make this subjective thinking the guideline of policy planning. Coming from somebody who leads a comfortable life himself, it may even sound condescending, for example when Frankfurt writes “[a]fter all, it is possible for conditions at the bottom to be quite good”11, keeping quiet about the fact that if conditions at the bottom of society are indeed “good”, they are so because some redistribution has already taken place.

Levelling Down Objection and Person-Affecting View

A more serious objection that egalitarianism faces, and that the sufficiency criterion avoids, is the so-called levelling down objection12. This objection claims that egalitarians have to argue that a state of affair is better when there is no person for whom it is better13.

This levelling down objection rests on the person-affecting view, according to which “states of affairs are better or worse only insofar as they are better of worse for particular people”14; or as Parfit and Pike put it respectively: “nothing can be bad if it is bad for no one”15 and “it is not possible for a state of affairs to be ‘better’ if it is better for no one”16.

Swift17 uses a simple example to demonstrate this: he has two children, but only one last indivisible sweet. With no obvious reason why one child should have a preference, Swift recounts that his children would prefer that he “throw the thing away or give it to some other child [rather] than create an arbitrary inequality.”18

The strive for absolute equality of distribution (of the sweet) not only leads to waste (at least from the children’s perspective), but it also fails to improve the situation of any of the two children involved. In comparison to the sweet going to none of the children, child A would not have been worse off had the sweet gone to child B, and vice versa. They would still have had the same amount of sweets as before, only that the respective other child would have an additional one.

In the person-affecting view, the equal distribution can therefore not be better than an arbitrary award of the last sweet because none of the children are better off than before by the last sweet being withheld from them altogether.

To me, this view is too mathematical, as if “better off” or “worse off” were the result of a balance sheet. But we are more than mere homines oeconomici.

Continuing with Swift’s example, none of the two children may be better off materially by the egalitarian solution to not distribute the sweet at all, but as they both voluntarily opt for this solution, they must feel that it makes them better off. It seems like they have a notion of equality and justice, and if these goals are being attained, the children feel better or feel they live in a fairer world. Not only because the children are siblings, the concept of fraternité comes to mind19. Taking these non-material aspects into account, both children are actually better off by the non-distribution of the remaining sweet. They might have felt worse off had equality not been maintained or established.

This simple example already illustrates that the person-affecting view is not of much help in questions of social justice and equality because if it considers material factors only, it clearly misses factors which are important to the persons involved, and if it tries to include immaterial factors, it becomes impractical in examples with a large number of persons involved because all of their views about social justice may well differ. Using the person-affecting view as a model, we would have to assume certain views on behalf of the persons involved which would in the end lead to us introducing our own original beliefs about social justice again, leading to nothing more than circular reasoning.

Reconciliation of the two Views

In fact, if I may elaborate on the person-affecting view a bit, I think it even offers us a chance to reconcile seemingly opposing views. The classic levelling down objection argues that strong egalitarians would prefer a situation where everyone earns 100 over a situation where one half of the population earn 100 while the other half earn 20020 and that such a preference would not make any sense because it would not improve the well-being of anyone.

One example is the crowding out effect in the competition for scarce resources21, e.g. housing. If one half of the population can pay twice as much as the other half, the owners of scarce resources will realise that it makes more sense to sell or rent to those who have more and charge higher prices accordingly. Those who earn less are being crowded out of the market. If all of the rich were to lose this advantage, it still would not mean that one specific poor person would benefit from it, but at least it would be a level playing field and that person’s chances would increase.

Another example is that the poor are forced to sell their labour and that the rich are the only ones who can afford to pay for this labour. If there is a mismatch between supply and demand, this can give one side of the economic divide factual power over the lives of the other.

The practical difference between the sufficiency view and egalitarianism may be less than those in theory.22 Frankfurt, a main proponent of the sufficiency criterion himself, allows for the possibility that “it might turn out that the most feasible approach to the achievement of sufficiency would be the pursuit of equality”.23 Because of the demonstrated economic impact of one’s comparative standing in society on sufficiency, I agree.

For another reason, I have a hard time imagining the creation of sufficient living standards for all those who are below this threshold today without some redistribution. That reason is my opposition to economic growth. If I want to improve the situation of the poor and I am against growth (for example for environmental reasons), then I have no other choice than to advocate redistribution of some wealth, thus advocating some form of egalitarianism.

1See e.g. the book “The Spirit Level: Why Equality is Better for Everyone“ by Richard Wilkinson and Kate Pickett and the subsequent discussion; or several recent papers by economists arguing that inequality systematically leads to economic crisis, many of them quoted in “Body of evidence” in The Economist, European edition, 17 March 2012, p. 71.

19Rawls 1999: 90 bemoans that “[in] comparison with liberty and equality, the idea of fraternity has had a lesser place in democratic theory.“

Parfit, Derek (1995) “Equality and Priority”, Ratio 10, no. 3, Oxford, Blackwell Publishers (reprinted in Matravers/Pike [2003] and quoted by the pages of the reprint)

I obtained a considerably higher mark than for the previous paper about functional explanation in the social sciences, which shall serve as a motivating factor for the upcoming paper about John Rawls.

Travelling the world and writing about it. I have degrees in law and philosophy, but I'd much rather be a writer, a spy or a hobo.
View all posts by Andreas Moser →
This entry was posted in Economics, Philosophy, Politics and tagged politics. Bookmark the permalink.

10 Responses to Equality versus Sufficiency