Ed, you are too late for the protest.

congratulations on becoming Labour leader, even if it might have irreparably strained relationships with those whom you professed to “love”. If that’s worth it for you, that’s your decision. 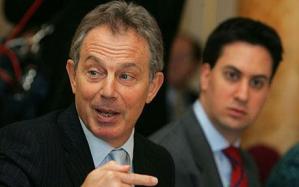 Granted, you didn’t vote for the Iraq war in 2003, but then you weren’t an MP yet so you couldn’t really vote on it. Or actually, you could in a way: Did you subsequently vote for the Labour government that had gone to war? I bet you did. After all, in 2005 you stood as a Labour MP. Were there no alternative parties around that opposed the war, that you could have run for?

In fact, you even joined that same government in 2006, under Prime Minister Blair who had been the driving force behind Britain’s engagement in Iraq. You served in this government for 4 years, without any (audible or visible) criticism of its Iraq policy.

When I was active in politics as a student, at every protest or rally there were people who showed up towards the very end of it. Because they were afraid of the police, because they were afraid of being seen or confronted in public, or because they didn’t really believe in the cause. But they also didn’t want to lose the votes of those protesting so they paid a visit. – Ed, you are one of these phonies. You are not only late for the protest, you are too late.

And I wouldn’t even mind what your true opinion is or was, if only you were honest. I myself supported the Iraq war (one of the things which added to the end of my political career in the Social Democratic Party in Germany, where this war was extremely unpopular) because of my strong dislike of dictatorships but I also respect any other opinion. To be respected however, it has to be a real opinion, a conviction, a belief – not a reflection of the current polls.

If you were against the Iraq war all along, then you sold your convictions for your career in previous Labour governments. Or you were supportive of the Iraq war all these years and only changed your stance now to win the party leadership contest. Either way, I cannot trust you. – In the event that you changed your opinion about the Iraq war somewhere between 2003 and 2010, I find it highly unlikely that this conveniently happened just after the general election in May 2010 and before your entry into the leadership contest.

Travelling the world and writing about it. I have degrees in law and philosophy, but I'd much rather be a writer, a spy or a hobo.
View all posts by Andreas Moser →
This entry was posted in Politics, UK and tagged David Miliband, Ed Miliband, Iraq, Iraq war, Labour, new Labour, Tony Blair. Bookmark the permalink.

5 Responses to Ed, you are too late for the protest.